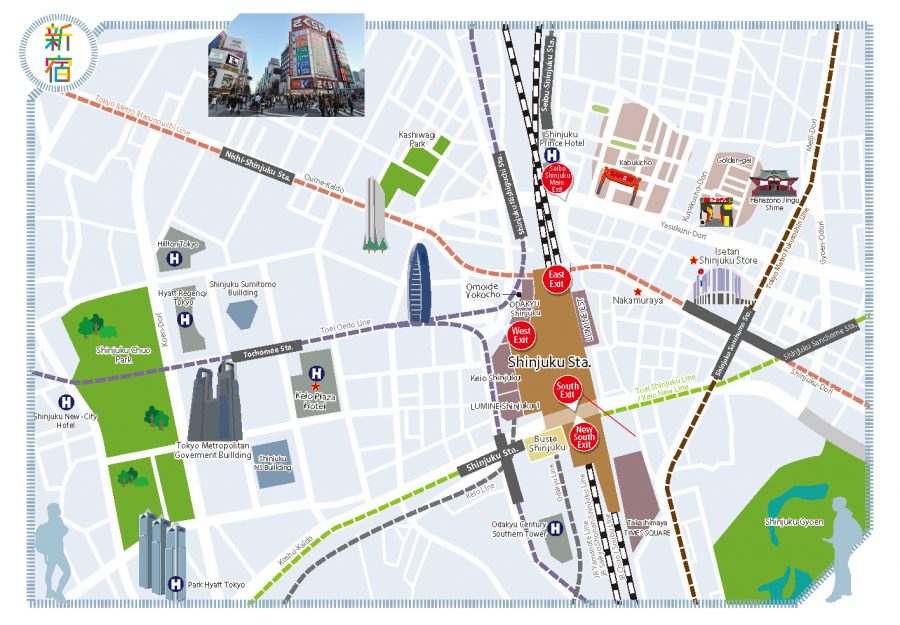 Shinjuku Station is a massive maze, even for people living in Tokyo. The station has as many as 36 platforms, some 200 exits and numerous hallways. According to the Guinness Records, Shinjuku Station is the world’s busiest station, with an average of 3.64 million passengers per day. That’s about the same as the population of Germany’s capital Berlin! But a huge crowd is not the only reason for getting lost in the labyrinth. Another reason is that the station is constantly under construction. Shinjuku Station first opened in 1885 as a stop on Kobu Tetsudo, a private railway which was later nationalized. However, some of the rail work remains unfinished. In fact, the construction of Shinjuku Station started earlier than Sagrada Familia, making it the largest unfinished architecture in the world. No wonder foreign visitors have trouble getting around this enormous swarming maze. 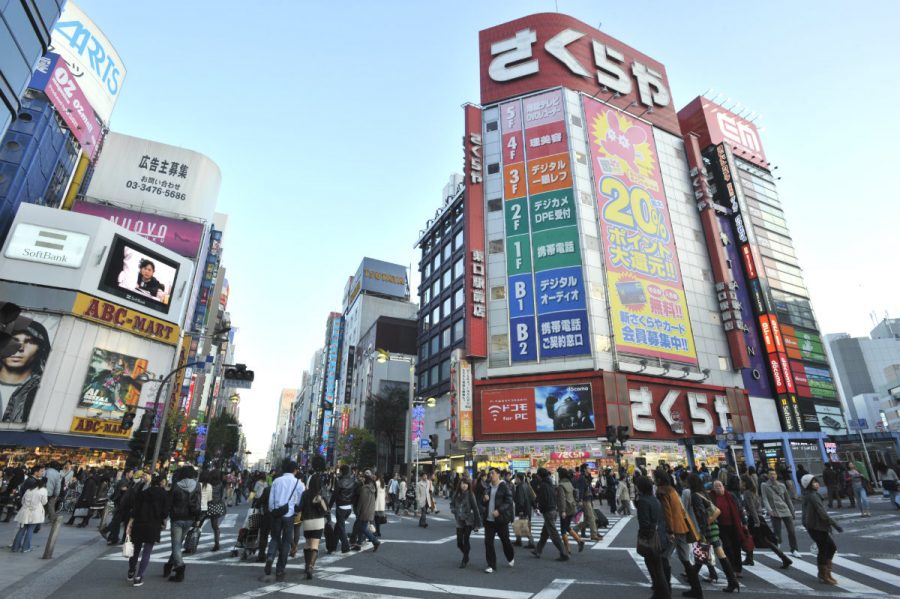 Nevertheless, Shinjuku Station, which is served by JR Line, Seibu-Shinjuku Line, Keio Line, Odakyu Odawara Line, various subway lines and bus routes, is the major transit hub for all kinds of transportation headed for tourist attractions in the suburbs. Shinjuku Station is truly your gateway to all of Japan! 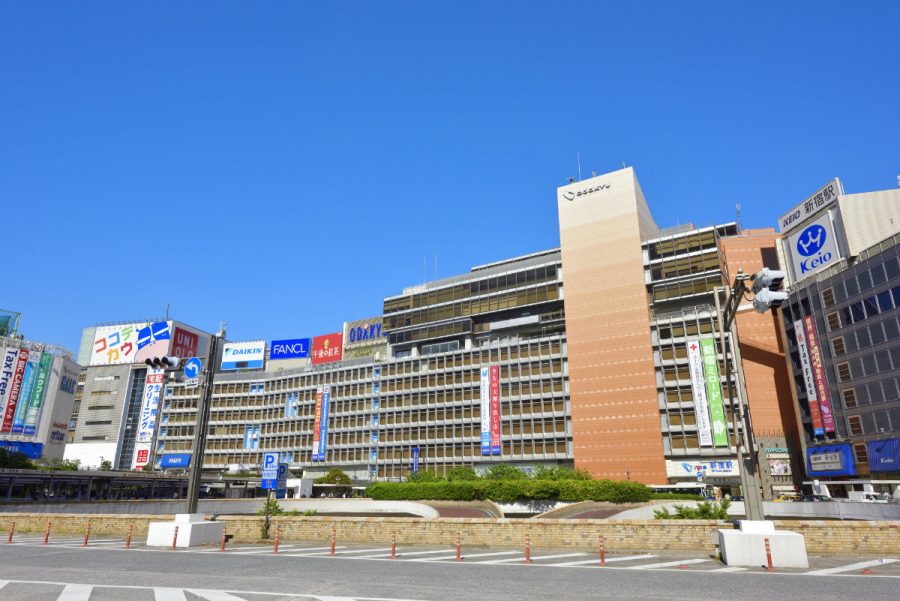 The Keio Line concourse is located on in the westernmost part of the Shinjuku Station. As the Keio New Line shares the same facilities with the Toei Shinjuku Line, if your final destination is Mt Takao, be sure to make your way to the Keio Line platform which is located on the underground floor of Keio Department Store at Shinjuku Station’s West Exit. Both special express or rapid trains travel to Mt Takao.

Get a bento box for hiking

Keio Line’s platform is directly connected to Keio Department Store’s “depa-chika,” the basement floor where the delicatessen section is located. Before embarking on a hiking adventure, why not grab a Japanese bento box or sandwich to have on the train? 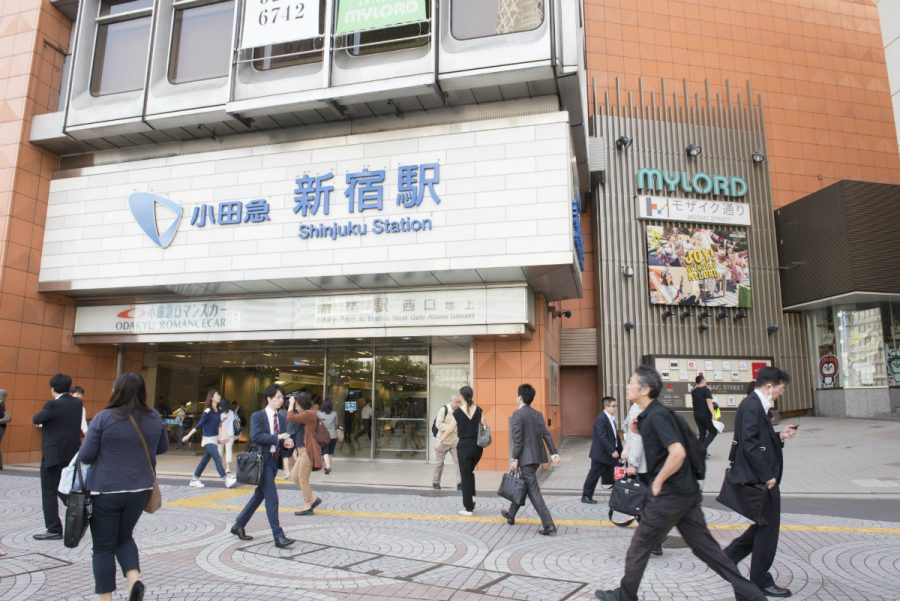 Odakyu Line concourse is parallel to JR platforms on the west side of Shinjuku Station. It is accessible from JR’s South Exit and West Exit. For Tokyoites, a day trip or weekend trip to Hakone on the limited express “Romancecar” is deemed a luxury getaway. 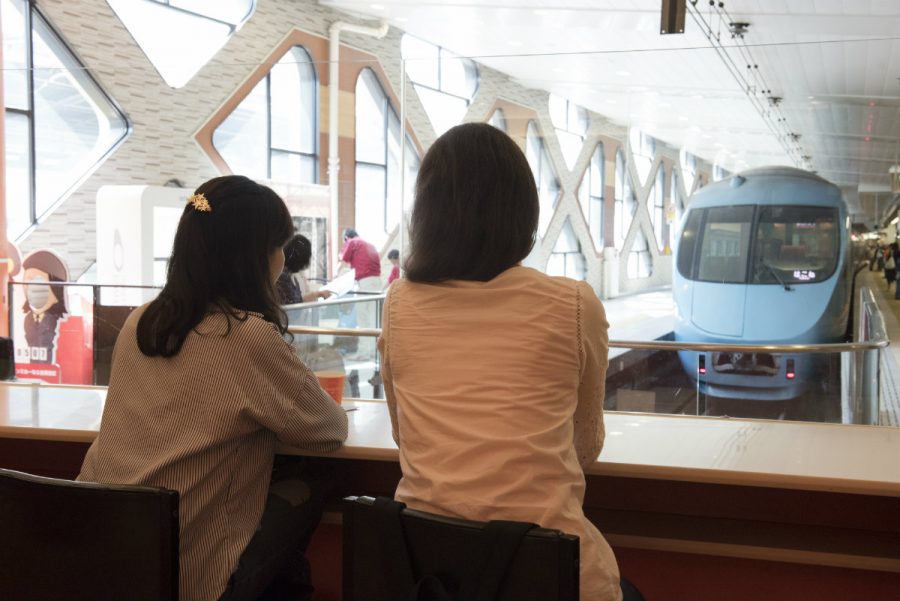 This café is inside the ticket gate and commands an unblocked view of “Romancecar” trains pulling in and out of the station. Sip on a cup of hot coffee and relax as trains depart before your eyes.

Beginning March 29, 2018, the Odakyu Group will make traveling for foreign tourists easier by setting up twice as many multilingual service counters as currently exist (English, Chinese and Korean are available on a daily basis while other languages depend on the day of the week). The center will also offer short-term baggage storage and sameday baggage shipping to airports and hotels in the Shinjuku. By the way, don’t forget to get your hands on discount transportation passes here! 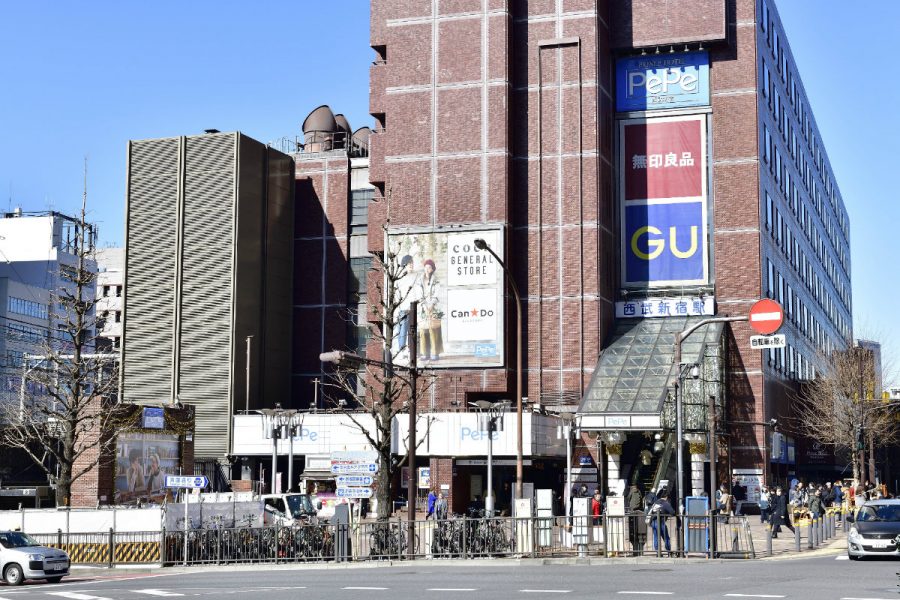 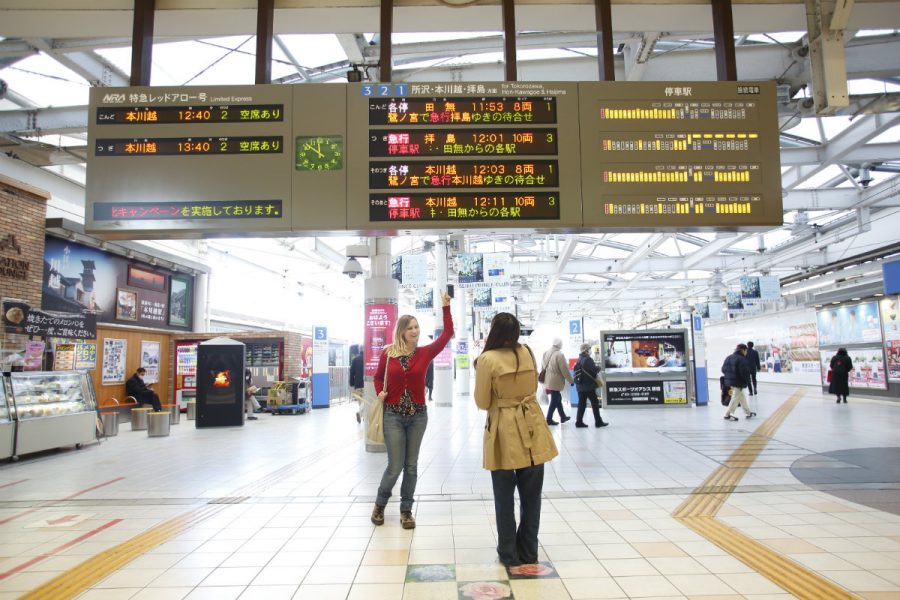 Shopping and dining in the station building

Seibu Shinjuku Station is a part of Seibu Shinjuku PePe & Brick St. shopping complex. The stores are open until 10 pm or later. After a day’s outing, you won’t have to worry about what to eat or where to shop when arriving in Tokyo. 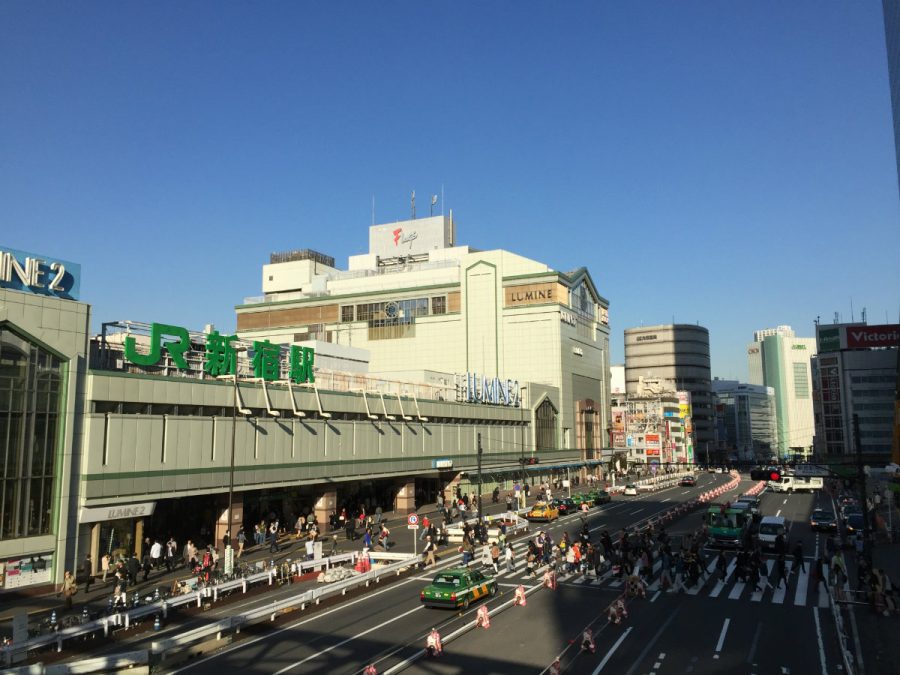 Shinjuku Station also has a platform for Narita Express which, compared to the Yamanote Line platform, is closer to Yoyogi Station. Travelers can access Narita Express through the newly opened New South Exit, which is opposite the South Exit and opposite a wide avenue called Koshu-kaido. For those coming from the southern part of Shinjuku Station, there is an underground passage which connects to the Narita Express platform. 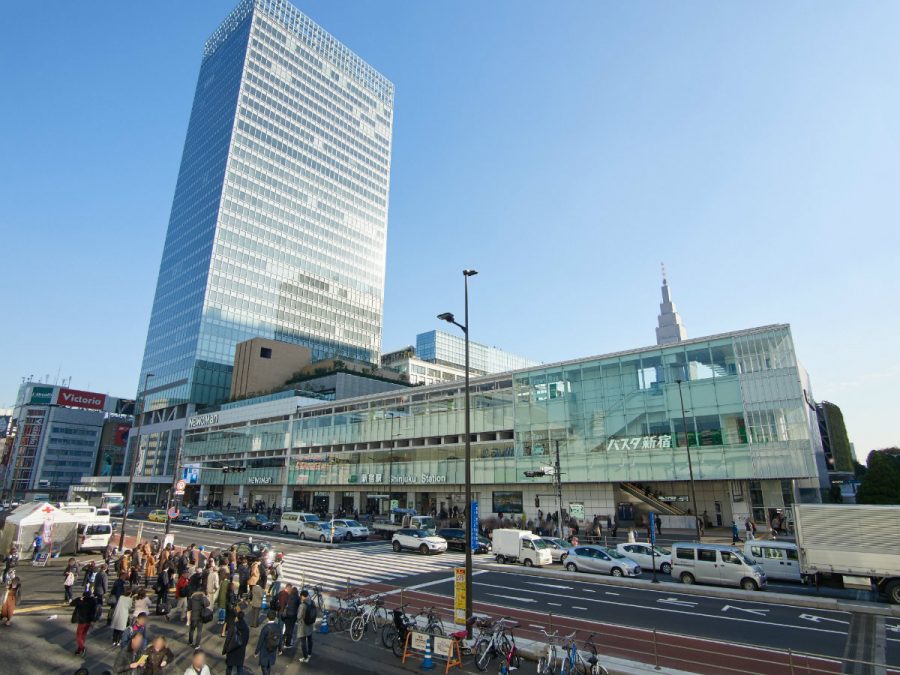 Located in the southern part of Shinjuku Station, Shinjuku Expressway Bus Terminal (Busta) is Japan’s largest bus terminal, handling 30,000 passengers per day. There are buses headed all over the country. If you are planning to visit the Mt Fuji area, the express bus is your best bet. After you arrive, make use of Fujikyuko bus passes that include destinations such as the fifth station of Mt Fuji, the Fuji five lakes area and many other attractions. If you are using JR lines, New South Exit is the most convenient way to access the bus terminal. However, users of different railway lines might have difficulty spotting New South Exit and so should, go out of the Shinjuku Station South Exit and cross the pedestrian crossing.

Travel & Ticket Booking Counter inside Tokyo Tourist Information Center Busta Shinjuku
The information center is on the third floor of Busta.
Why not stop by to check out all kinds of fun travel items, meal plans and discounted admission tickets for international travelers?
Web: http://www.tourist-information-center.jp/tokyo/shinjuku/en/

Learn more about the history of Shinjuku and all its rises and falls in Shinjuku – A City of Rebirth and about the iconic Legendary Establishments as Landmarks of Shijnjuku.