In Japan, there are around 400 Katori Shrines dedicated to Futsunushi-no-kami (Katori Okami) and one of them is located in Tokyo’s Koto Ward. This shrine, especially famous for its God of Sports, is marked as a holy destination for Japanese athletes who usually come to pray for victory before important games. In fact, the origin between sports and Kameido Katori-jinja Shrine can be traced back to as far as 1,000 years ago.

The Victory Shrine: a Promised Land for Athletes

Kameido Katori-jinja Shine is dedicated to a deity called Katori Okami. Katori Okami also acts as the protector god of the nation, the god of warriors and the god of industrial development because he looks after both the nation and agriculture. According to legend, the shrine was built in 665, when Fujiwara-no-kamatari, the founder of the Fujiwara clan, made a stop at Turtle Island (1) during his journey to the eastern provinces (presently the Kanto and Tokai areas).  He presented his sword to Katori Okami and built today’s Kameido Katori-jinja Shrine to pray for a safe journey.

During the mid-Heian period, in 940, Fujiwawa-no-Hidesato came here to pray for the success of a battle against a rebellious samurai called Taira-no-Masakado (2). His prayer was realized, so he offered his bow and arrow to the shrine. The weapon was later named kachiya, meaning the winning arrow in Japanese. The shrine has been holding the Kachiya Festival on May 5 each year for more than one thousand years. Locals would dress up in samurai suits and battle armors and take part in a precession approaching the shrine（3）. The kachiya dedication ceremony marks the highlight of the festival. Katori Okami is a deity revered by all the Japanese emperors, warriors and practitioners of martial arts. With origins owing to the anecdote above, Kameido Katori-jinja Shrine is also referred to as the Sports Shrine.

Believe in Your Faith and Pray for Good Luck

A 10-minute walk from Kameido Station on the JR Sobu Line will take you to the Kameido Katori Katsuun Shoutengai  Shopping Street. Lined with retro buildings reminiscent of the Showa period (1926-1989), the celebrated shopping street is directly connected to the main road approaching the Kameido Katori-jinja Shine. At the end of this street, one is greeted with a torii, a traditional Japanese architecture that marks the entrance of a shrine. The greyish black gate-like structure gives out a sacred, assuring atmosphere, as if it has the power to block all the noises from the shopping street. The torii gate is a symbol of the transition from the mundane to the sacred.

At the end of the main road leading to the shrine lies the shrine’s main building. Although Kameido Katori-jinja Shrine boasts a history of more than a thousand years, the main building was only built after the World War II. After you have said your prayers, you can walk to the left of the main building to pay respect to a gigantic rock called the Katsuishi Stone. It is said that victory and good luck will fall upon you if you touch the stone with both hands and say your wishes. The stone is a power spot loaded with energy. Meanwhile, the right-hand side of the main building is home to the statues of Ebisu and Okuninushi. It is believed that the act of pouring water on the statues can help cure illnesses and bring health and prosperity.

Worshippers can write down wishes on a wooden plaque called ema and buy a special amulet that can provide blessings wherever you go. To take home this charm, you have to first pick up a small white stone within the premises of the shrine, wash it with water from the hand purifying pavilion, tuck it inside the designated pouch (4) and go back to the main building to say your wishes. Shrine officials remind visitors that white stones alone do not have power, so worshippers have to place them in the designated pouch for the magic to work.

Although Kameido Katori-jinja Shrine is known as the Sports Shrine, you don’t have to necessarily pray here just for winning matches. You can also pray for victory over illness or any obstacles in life.

(1) Kameito is an area in Tokyo’s Koto Ward. It used to be an island in the past and was named the turtle island because of its unique shape.
(2) Taira-no-Masakado’s grave is located in Tokyo’s Otemachi. For more information on the history of Taira-no-Masakado, please read.
(3) The parade of the 2020 Kachiya Festival was called off because of concerns regarding the coronavirus outbreak. Whether the event will take place this year is still not certain.
(4) The designated amulet pouch can be purchased at the shrine office.

Next to the hand purifying pavilion is a gigantic monument in the shape of a white radish. According to historical white radish in the Edo period and became famous for white radish production in the Meiji period. Fertile soil from the Arakawa River water system made the texture of the radish crisp and solid. Kameido Daikon, a brand name for radish from the area, became well known in the Meiji period. The monument shows how important radish is to locals. 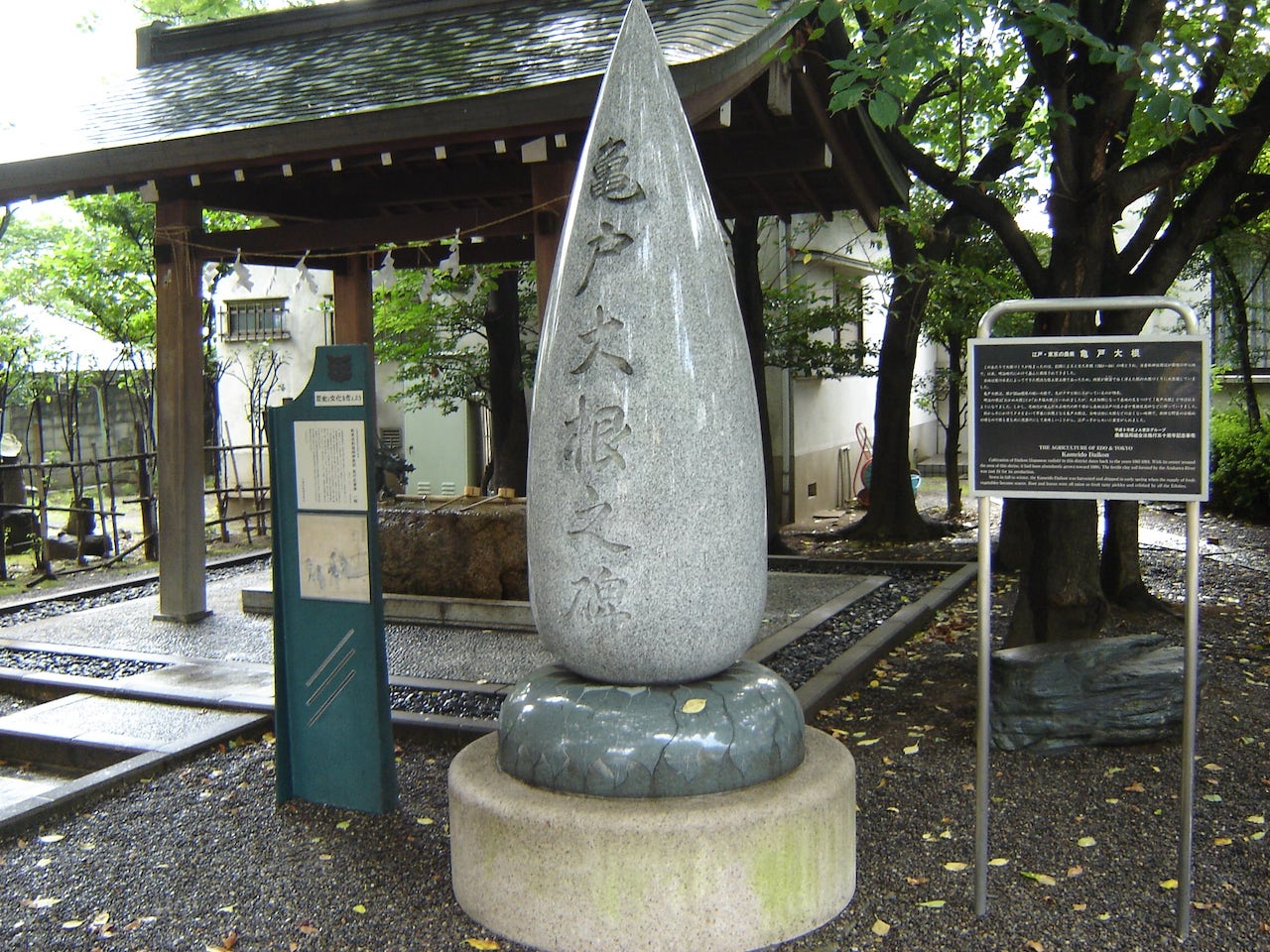 The Japanese dance, Yosakoi – to bring cheer to the world