A lot of people from various cultures have felt that bathing cleans more than just their bodies. There is also a feeling of cleansing your mind and soul. This is no coincidence. In fact, bathing rituals in various shapes are present in many religions. This includes Christian baptisms to ritual baths in the Ganges river. That is why bathing culture and sento culture is so important in Japan.

In Japan as well, the origins of bathing are both ritual and religious coming from Buddhism practices. In addition, water is also a common purifier in Shinto myths. Over time, the idea of bathing spread with noblemen. Japanese elite began to construct private baths in their homes during the Kamakura period (1185-1333). The invention of “mushiburo” or “steam bath” in caves appeared at the same time. Eventually, the popularization of communal bathing for the masses culminated in the sento culture of the Edo period.

Sento in the Edo period (1603-1868) spread so much that it’s apparent in many writings. In that time, even the poorest people could afford to go at least once a day. Cleanliness became a great value of the society and it was noted and praised by many foreign visitors. In fact, they even wrote about sento culture in their travel diaries, stories, and reports on Edo.

What some of the more puritanical visitors criticized in sento culture was the lack of segregation of genders in the bathing space. Very often the changing room and bathing room in Edo sento bathhouses were not clearly separated. Mixed bathing was normal in the Edo period. Eventually, some sento owners imposed different bathing hours for men and women. Some declared men-only bathhouses and rarely woman-only ones. Alternatively, others tried to separate female and male baths by a very low simple board partition.

Even the Tokugawa Shogunate tried to regulate or outlaw mixed bathing several times. This came as customer interaction grew into fraternizing that the Edo Bakufu government deemed immoral.

The Evolution of Sento Culture

Although it was very common and natural for men, women, and children to bathe naked together, the Tokugawa Shogunate and religious missionaries disapproved of the changing services of the bath ladies or yuna. The services of yuna were just sento related at first. Seno yuna helped with washing backs and fetching water. This job was later relegated to sansuke later. Sansuke were exclusively young men.

However, a custom emerged of closing sentos in the afternoon and admitting only certain customers who paid extra to be entertained by the “bath ladies”. These women now changed into fancier clothes played shamisen, and eventually retired to the second floor with customers.

The Edo Bakufu first tried to limit the number of yuna per onsen. However, they were unsuccessful, so they ended up completely banning yuna in 1657. As a result, many of them moved to the Yoshiwara red-light district of the time. Sentos in the rich Yamanote area retained the second floor and used it for drinking tea, playing shogi, and socializing. Eventually, the two-story structures eventually disappeared in the Meiji era, though.

FROM EDO SENTO TO TOKYO SENTO

The Edo sento differs from sento today because of changes made during and after the Meiji period (1868-1912). The Edo sento was smaller, darker, and steamier, but the rules and steps of cleaning yourself and the feeling of community and interacting in the common spaces stayed the same to this day. People with sento-related jobs like the bandai (receptionist) and the sansuke and yuna (male and female sento assistant, respectively) have disappeared today, but the variety of baths and convenience have increased. During the transition from the Edo period to the Meiji period, sentos lost their second-floor common space, and genders became strictly segregated, and that’s the sento of Tokyo today. 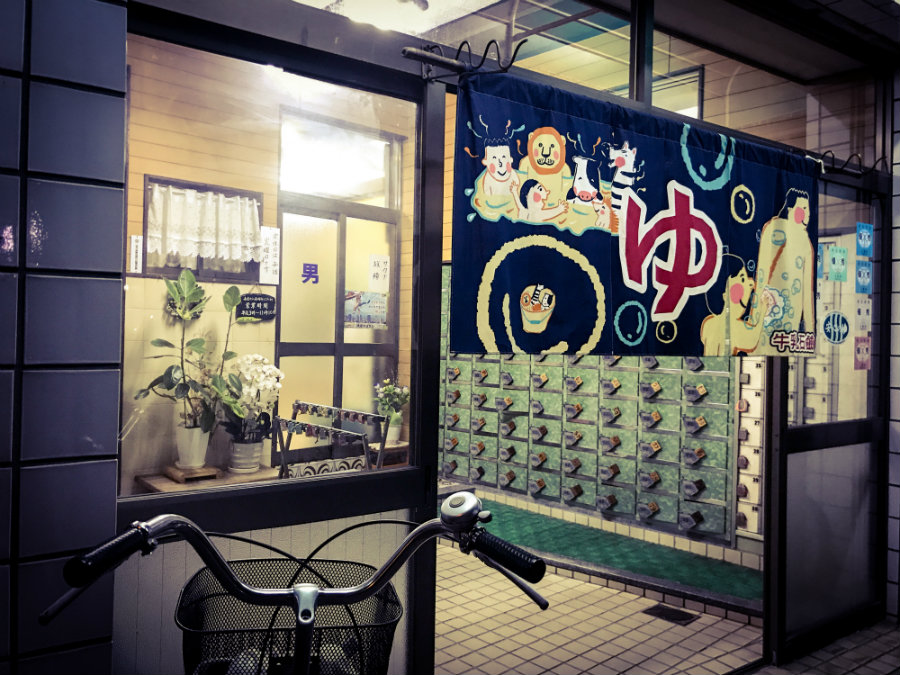 The New and Improved Sento

The Tokyo sento compared to the Edo sento grew bigger, more spacious, with higher walls and ceilings and more open space. The partition between male and female baths grew taller, and windows were installed to actually let the steam out. The steam baths became a different type of bath offered along with the hot water baths, together with saunas, bubble baths, electricity baths, jacuzzi jets, silky water baths, and so on. The bigger the sento the more options there are. Some sentos even have a “rotenburo” – an open air bath outside in the garden, something a lot of people associate more with the onsen bathhouses. 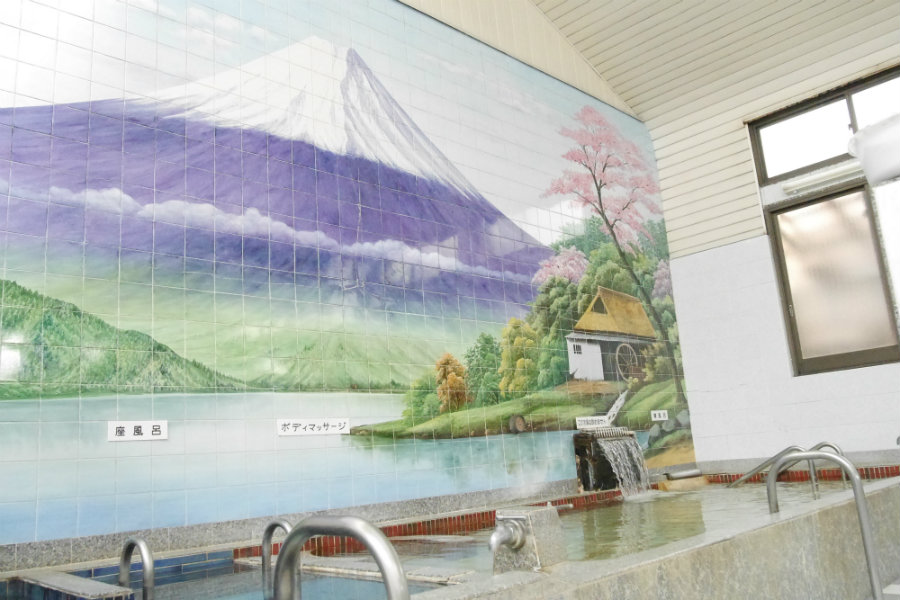 Of course, with the improvement of overall technology and general modernization, in the Taisho era sentos became tiled and thus easier to clean. In addition, the new water system made it easier to fill the baths and heat the water. They simply and truthfully called them “the improved bath”. During the Showa period showers became the norm in sentos and baths in people’s private houses. In the 1960s in Tokyo there were as many as 2687 sentos, but their popularity and the numbers of sentos decreased over the years as the private baths at home became more widespread and more convenient.

It is estimated that the current number of sentos is between 600 and 700. However, sentos still survive in the modern era, because they still offer something more than just bathing – cleansing, relaxation, and a sense of community. A sento offers a feeling at the end of the day that we are all only humans after all and we are together. This is why even foreigners like Stephanie Crohin love sentos.

There are many charming local sentos around Tokyo that are worth paying a visit. That being said, sento are waning. 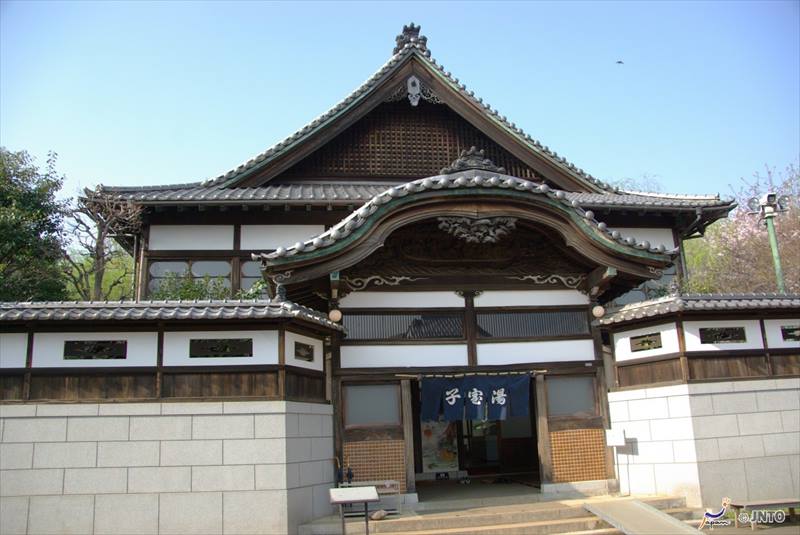 Unfortunately, Sento bathhouses are on a sharp decline. During the past few decades, the number of Sento baths around Tokyo has dropped from over 2500 to around 600. There are many factors for this decline but a few major reasons are a) there are fewer people using a public bath, b) facilities are deteriorating rapidly and the renovation cost is enormous, c) utility costs (water and gas) are getting more expensive and d) owners are getting old and they don’t have a successor who can take over the management.

You might say this is just part of economic progress, an evolution from a poorer time, and that change is inevitable and necessary. But as one of many naive Sento enthusiasts, I would like to do something about it. So be willing to expose yourself to a cultural experience and in the process bear witness to the naked truth. If we don’t contribute to keeping these landmarks relevant they will disappear and the stories of everyday life will wash away down the drain of history. If you need a guide, check out our article on Japanese bathing for beginners.

Zoria April
Zoria is a writer, of the rare poet variety and a passionate photographer. If you see somebody around Tokyo taking photos of concrete walls, it must be her. She loves to dress fashionably and go drink as many cups of coffee as humanly possible, preferably in cafes with a view.
MORE ARTICLES BY THIS WRITER ｜ ABOUT WATTENTION NINJA
Comments