While Tokyo is often thought of as a modern metropolis, a step beyond the glistening skyscrapers and a wander down the winding side streets will reveal a pathway to the city’s spiritual side. Tokyo is in fact home to thousands of Shinto shrines and Buddhist temples, both hidden and in plain sight. Each site has its own unique history, story, and feel, and a visit to one or two can transport the curious traveller to a different side of Tokyo, its other side.

There are two Buddhist concepts central to understanding the mysterious nature of Tokyo; these are “shigan”, literally meaning “this shore”, and “higan”, “that shore”. Simply put, shigan refers to the world we know, and higan is the place humans go when their time is up. While majority of Japanese people are not religious, both Buddhism and Shintoism are deeply ingrained in Japanese culture, and so many Japanese traditions are related to this shigan-higan journey. In example, it is common practice in Japan to pray at temples, and visit the graves of one’s ancestors, both acts considered to help one’s journey across the river that divides the higan from the shigan. Along with the traditions born from these concepts, there are also many legends of mysterious creatures that cross between them; the “yokai” and the “yurei”.

Yokai, often translated as “monsters” or “demons”, are the creatures that make up Japanese folklore. They come in all shapes and sizes, and are known to appear in specific places in the shigan such as temples, mountains and rivers. Yurei are more in line with the Western concept of “ghost”, and are often depicted as women with long, unkempt black hair. Yokai and yurei make up the backbone of Japanese literature, theatre and art, with “kaidan” or “ghost stories” remaining immensely popular throughout the ages. Kabuki theatre in particular is known for its popular adaptations of kaidan, with plays such as Kido Okamoto’s Bancho Sarayashiki (“The Dish Mansion at Bancho”) still exciting and frightening audiences to this very day with their renditions of the famous yurei Okiku crawling out of the well she died in – an image that undoubtedly inspired modern horror films such as the immensely popular “Ring” and its foreign adaptations.

How then do these concepts and creatures relate to Tokyo’s other side? As mentioned above, kaidan are an immensely popular subject in the arts in Japan, and regardless of the adaptation, they are all based on impressively old stories and legends set in real places that still exist in modern Japan. Okamoto’s Bancho Sarayashiki is set in Edo (now Tokyo), as is Japan’s most famous kaidan, Yotsuya Kaidan.  Even now, the areas featured in these stories are accessible, inspiring audiences to question the boundary between Tokyo and the higan, and investigate them themselves. 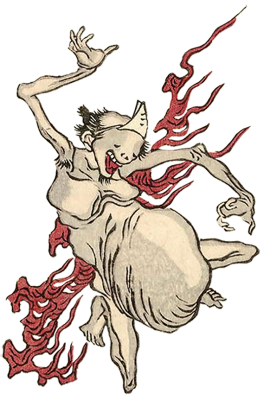 Writers and artists from all over the world have also shown interest in Japan’s connection to its other side, and have thus introduced it to audiences outside of Japan. Lafcadio Hearn, known in Japan as Yakumo Koizumi, published one of the first English anthologies of Japanese ghost stories in his 1904 book “Kwaidan: Stories and Studies of Strange Things”. French photographer Charles Fréger explored the connection of Japanese masked rituals and the countryside in his 2013-2015 project titled “Yokainoshima” (“Island of Yokai”), resulting in photographs that truly seem to be from another world.

Despite the enthusiasm of both foreign and Japanese creatives, Tokyo’s connections with the other side remain relatively unknown. So for the curious travellers out there – be brave. Step off the beaten track and discover the temples and buildings where yokai and yurei lurk, explore the origins of Japanese ghost stories, and rediscover Tokyo as a city on the boundary between this world and the next.