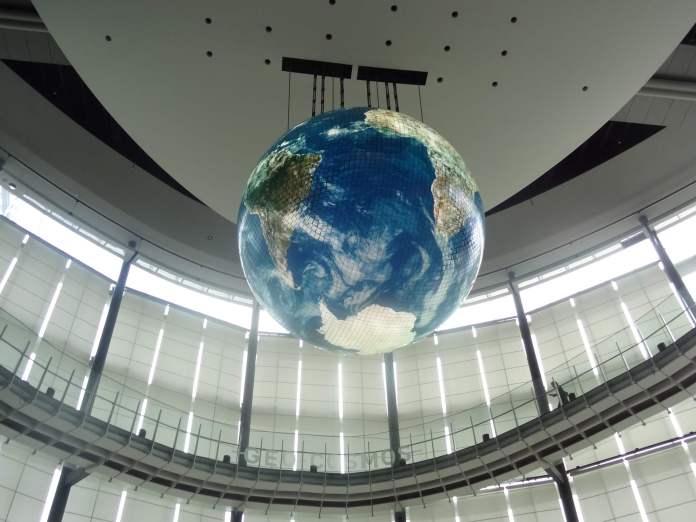 Where is modern technology heading?

The Digital Content Expo is an annual event held at Tokyo’s Miraikan, the National Museum of Emerging Science and Innovation. With new technology products and experiments for digital contents as video-games and anime, walking around in the showroom here gives you a good impression of where modern technology is heading. WAttention was on the site to check it out, so let’s see what the newest Japanese technology has in store for you!

At this year’s Digital Content Expo, it was very noticeable that VR (virtual reality) devices are becoming more and more mainstream. While video-game companies as Nintendo and Sega released VR devices way back in the nineties, technology was too limited to provide an experience appealing enough at the time.
Now, roughly 20 years later, VR devices are so advanced and functional that they seem to be well on their way to create a new revolution in the world of technology, and with this I am not just talking about video games. At the Digital Content Expo, developers showcased many new ways to use VR devices, ranging from architectural software to practicing sports and interactive contents for museums.

Among the products and experiments displayed at the event, the one’s that attracted the most visitors were not per se those that used the most advanced technology. Of course new technology creates new possibilities, but what’s even more important is how and what you decide to do with it. The popular booths all had something unique and special on display that did not only rely on heavy investments, but on the ideas of the creators even more so. Here follow some of the most creative digital contents we saw this year.

At first sight, this project might just look like a simple sketch book to make drawings of animals. But after you finish drawing your animal and put a stamp on its belly, your creation comes to life and will start walking around and shaking its ears. Seeing your own drawing walking around together with animals drawn by other people is a total blast and great fun for kids!

Parents always worry about their baby. It is not uncommon anymore for parents to install a webcam in their home to check on the baby with their smartphone or computer when out or at work. Now, with this digital pacifier parents can know things about their baby that aren’t even possible with the naked eye. The sensor attached to this pacifier detects how strong and in what kind of patron the baby sucks on the pacifier. The pacifier sends over the situation the baby’s sucking indicates to a computer or smartphone. For example, if the baby stops sucking, the devices sends over “Your baby has fallen asleep”.
I feel great potential in this project. If it evolves even more, we might even become able to talk with animals!

Hardly anyone buys CD’s anymore. Music is downloaded digitally or listened to online. But hasn’t a part of music’s charm gotten lost? For example, CD’s used to come with lyrics books. Today, less and less people take the time to have a good look at the lyrics. The newly developed music playing device “The Lyric Speaker” solves that problem, as it “plays” music not only the sound, but also the text. The lyrics of the song are displayed on the device, allowing you to pay attention to the lyrics without having to search for them online. This concept might also work for discos, where larger versions of these devices could be installed to dance not only to the beat.

If you are a shy Japanese but still want to show your expressions, this new application developed by Yahoo! JAPAN will come in handy as it reads both your movement and facial expressions which you can show through an anime-ish character during a chat session. Choose the character that matches you the best as your personal avatar to show your feelings to someone without having to actually confront this person. Leaving away the question whether this is socially healthy or not, it definitely shows something about the Japanese society and the way people interact with each other.