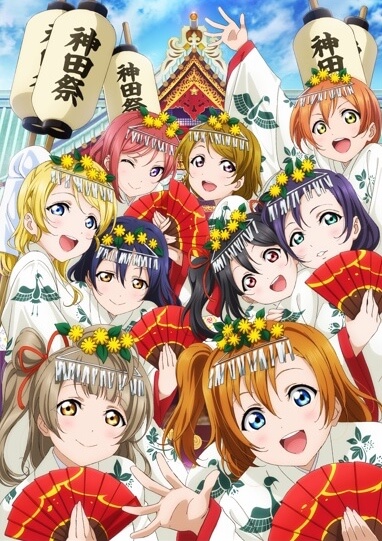 All the stars were aligned for fans of the Love Live! anime during this year’sKanda Festival held from May 9-10. For the first time, they got to pay pilgrimage officially at the Kanda Myojin, which appears frequently in the anime as a backdrop, and buy limited-edition official good luck charms and prayer tablets from the shrine featuring the anime’s characters. This collaboration between the Shinto shrine and hit anime is a sign of the growing influence of subculture – even into the sacred space of shrines and one of Japan’s biggest festivals!

Love Live! is about a group of nine schoolgirls who decide to form a school idol group to raise the profile of their school which is on the verge of closing down due to low enrollment. Combining the concept of live idols with anime, this series hit the right note with the audience and since its magazine debut in 2010, has sold music CDs, games, become a TV series, and will even release its first movie this June. And you know you’ve arrived when you find your image endorsing the official good luck ema prayer tablets or protective charms of a historical shrine like Kanda Myojin.

Unlike Buddhist temples, Shinto shrines – which are indigenously Japanese – are more open to such collaborations and adapt to the times. Previous collaborations include a “Kanda Myojin Day” at the Tokyo Dome with the baseball team Tokyo Giants. This is reflective of the Shinto philosophy where the religion is action-oriented and focuses on ritual practices to connect present-day Japan to its ancient past. And how can present day Japan not give any recognition to its booming subculture of anime? Moreover, the Kanda Myojin is just a stone’s throw from the mecca of otaku, Akihabara. Apparently, Love Live! fans already pay pilgrimage to the Kanda Myojin, where Nozomi, one of the characters, works as a part-time shrine maiden.

From Akihabara to Kanda Myojin Museum

And who knows, within the next 100 years, there may be a poster of the Love Live! school idol group rocking out hung on the walls of the Kanda Myojin Museum, where currently paintings from the Edo era, such as a ukiyoe painting of a kabuki performance with an accompanying instrumental ensemble performing at the Kanda Festival, are displayed.

Fans flock to the festival

Fans flocked to the shrine to be the first in line to get their hands on these Love Live! collaboration goods. But first, many offered their prayers, hung up their ema with original manga drawings, and took selfies with the shrine that appears in the anime.