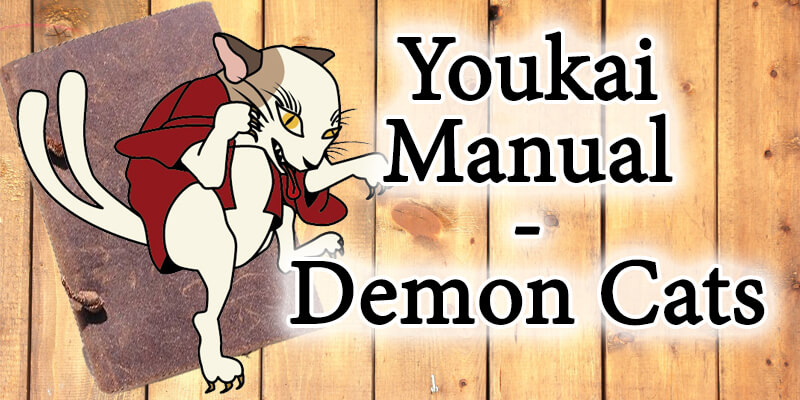 Youkai are creatures from Japanese folklore and myths. They have existed for hundreds of years and continue to live on in popular culture. Friendly and evil, youkai come in many forms. We’ll take a dive into the yokai manual and uncover the mysteries of Bakeneko and Nekomata.

In this article we will talk about the Bakeneko and its grown up and more powerful version, the Nekomata. Cats have always walked the fine thread between good and evil all over the world. This might be because their glowing eyes, nocturnal lifestyle and attitude have a flair of the supernatural.

The origin story of the Bakeneko is a sad one in this youkai manual entry. According to old beliefs in ancient Japan a cat older than seven years would attempt to kill its owner. As cats became more and more domesticated the decision of how long a cat was allowed to live came along with the decision of a possible adoption. Our youkai manual says that bakeneko are vengeful cats that came back from the dead, cursing their owner.

Bakeneko looked like regular cats but had the ability to shapeshift into humans, dance and speak the common tongue. Their favorite food is poison and lamp oil. Drinking lamp oil might have seemed strange to the people at the time but you can’t blame the cat as the oil used for the lamps was fish oil. During the Edo period (1603 – 1886) people believed that cats with long tails could bewitch humans so they decided to crop them. According to the youkai manual, age is also important for a Bakeneko, the older the cat the more powerful it is.

In general, Bakeneko are always up to no good. However, there have been encounters of Bakeneko getting along with their human family if their transition to a Bakeneko was peaceful. To make sure you encounter a friendly one, you better treat cats nicely! 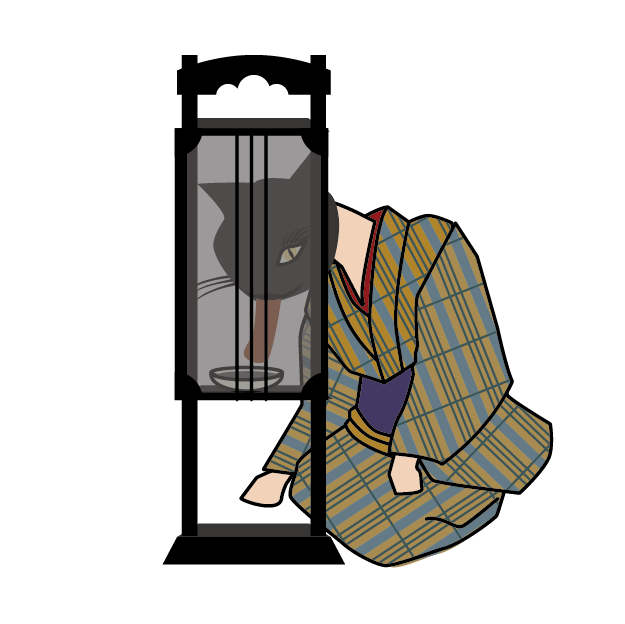 Next in our youkai manual is the Nekomata. Nekomata are a variety of the Bakeneko and also go by the name “forked cat”. However these critters far more powerful and evil. Once a Bakeneko gets an extremely long tail and reaches an old age the tail will split in two and a Nekomata is born. They start to walk on two legs and speak the human tongue. Even though they imitate humans, Nekomata feel superior in every way. In fact, they find great pleasure in tormenting humans and creating chaos wherever they go. Their powers include creating fire, controlling the dead and shape shifting. It’s quite a list, so you better watch out!

The City Nekomata are evolved versions of domesticated cats. Because of this they have better knowledge of humans and know what tricks to use on them. For a long time some courtesans were believed to be Nekomata in disguise because of their bewitching looks. They used this beautiful human form to lure victims to their deaths. Today, in modern Japan, cat-like features are still evoke a mysterious sense of beauty.

The Mountain Nekomata first appeared during the Kamakura period (1185 – 1333), much earlier than their city counterparts. Nekomata were creatures that lived deep in the mountains and would feed on humans. They were described to be the size of a big dog with piercing eyes and long sharp claws. There is fossil evidence of a prehistoric form of tiger having lived in ancient Japan, so maybe the mountain Nekomata is not a creature of legend. 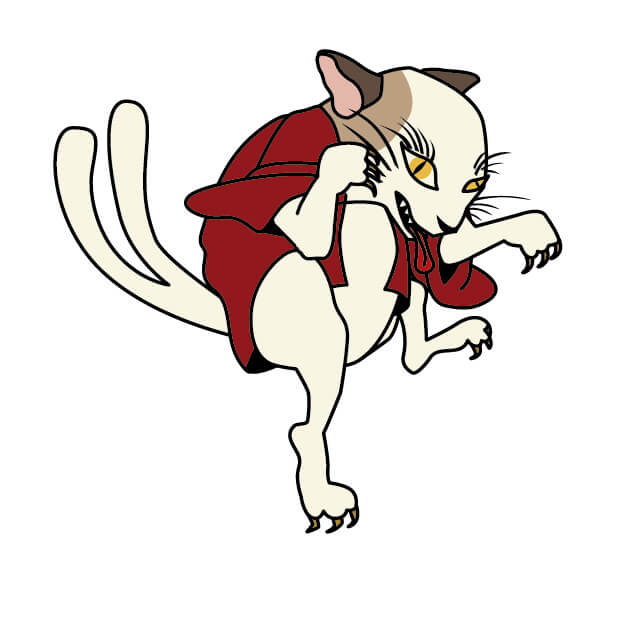 Demons cats during the Edo period

During the mid-Edo period many stories about Nekomata and Bakeneko appeared in newspapers. A famous story is that of a samurai family in 1708. Their house was taken over by an evil spirit and the haunting only stopped when the family’s cat was killed. Looking at the cat they saw it had two tails. Because the Edo period was the peak of ghost stories, people stayed away from mountains because they already had plenty of ghost stories surrounding them. This made the belief that cats could turn into demons popular again. It seems that people of the Edo period preferred scary stories.

Nekomata art became popular. With the connection between Nekomata and courtesans, some portraits of cats wearing beautiful kimonos spread in the form of prints. Other drawings were published in the “Hyakkai Zukan” (The Illustrated Volume of a Hundred Demons) created by artist Sawaki Suushi. The drawings are one more example of how traditional beliefs and culture still influence art today. 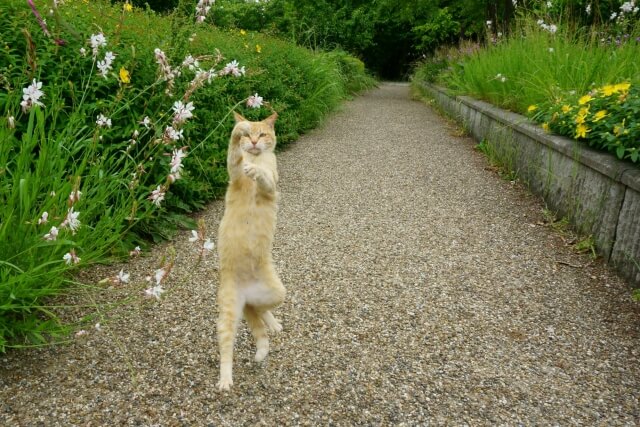 Neko Musume roughly translates to “cat girl” or “cat daughter”. Although they have no connection to Bakeneko or Nekomata they are supernatural beings. They are believed to be half-cats or humans possessed by a cat. During the 1850’s a story of a Neko Musume became popular. In the story,  Matsu, a young girl, was frequently spotted running on all fours. She would move like a cat and wash herself like a cat. That would be a surprising sight, for sure! Later more stories of human-animal hybrids spread, but the Neko Musume was the first of its genre. 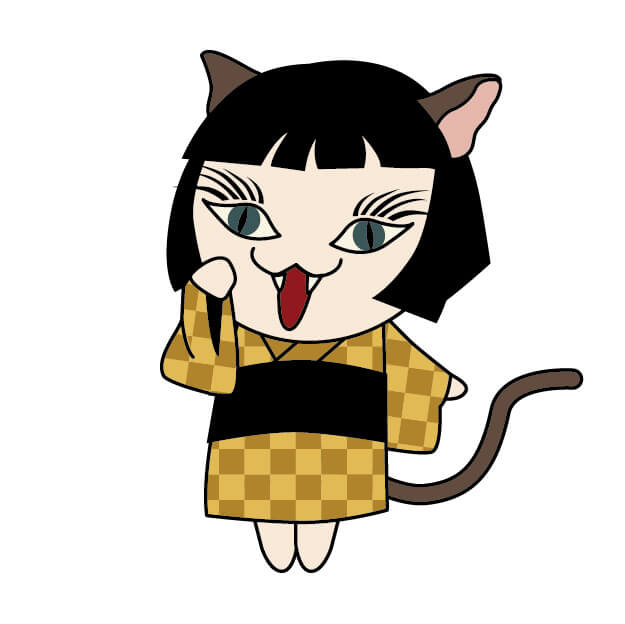 In modern times the Nekomata and Bakeneko changed into more adorable versions of their old evil selves. The legend of demon cats still lives on with manga, anime, movies and books. There is even a mountain in Toyama prefecture which locals call Nekomata Mountain and a Nekomata Peak in Fukushima prefecture. Probably the most famous depiction of a Neko Musume is in the manga “Gegege no Kitaro”. But she is not the only popular character that borrows powers from a cat. I’m sure you can think of many examples of fictional characters with cat-like abilities.