Nohgaku, Kabuki, and Bunraku embellished the Edo theater scene, and they continue to fascinate audiences to this day. However, how shows are performed and how audiences experience them have undergone many changes since Edo period.

According to Professor Kodama, electricity played a major role in the evolution of Kabuki. Without electricity, it had been impossible to light the stage perfectly in time with stage cues, like an actor clapping his hands. When the stage needed to be lit, the stagehands behind the set would have to hurry to raise the window shutters all at once. With an electrical lighting system in the theater, it became much easier to adjust the lighting and perform various effects. This changed the theater atmosphere completely.

Every year, more novel and diverse motifs are being fused with Kabuki theater. For instance, the international manga sensation “One Piece” premiered as a Kabuki play with the performance “Super Kabuki II: One Piece” in 2015. It blended traditional Kabuki acting with prerecorded modern music and advanced set pieces. This year another beloved manga/animation will grace the Kabuki stage. In December, a play based on the world-acclaimed animation director Hayao Miyazaki’s “Kaze no Tani no Nausicaä” (“Nausicaä of the Valley of the Wind”) will begin running. Western ideas have also started to appear in the world of Kabuki. In 2009, the performance of Sistine Kabuki debuted at the Otsuka Museum of Art in Tokushima staged under a replica of Michelangelo’s painting on the Sistine Chapel ceiling. Japanese theater is boundless in its expression, channeling forms of popular culture found in film, comics, and social media.

Even for many English speakers who have now been gracing the Kabuki theater in huge numbers, the attraction to Kabuki is the drama itself. In 1975 English earphone-guides were introduced, and in 1982 came English play guides and English subtitles; but in Professor Kodama’s opinion, those aids might be distract-ing during a performance. He feels that reading plots written in English on flyers or websites in advance and focusing on the stage makes understanding it better.

Takigi Noh, a type of Noh performed outdoors at night lit by large torches, created a completely different theater experience than traditional indoor viewings. It was first played at Kokufu-ji Temple in Nara during the Edo period, and gradually touched venues in Tokyo and other parts of Japan after the war. It has become very alluring for people who may be less interested in Noh itself but are drawn to its absolute beauty and charm. This autumn, Takigi Noh performances will be held at Zojo-ji Temple, Shinjuku Gyoen, Meiji Jingu shrine and many more venues throughout Tokyo.

In Bunraku, performances began getting innovative and have been presenting three puppeteers from mid-80s, as opposed to a single puppeteer in early days. The Sugimoto-Bunraku production emerged with avant-garde technology, such as video installation, and revived Japanese classics with a modern approach. However, many masterpieces of Chikamatsu Monzaemon, such as the Bunraku classic ”Sonezaki Shinju” (“Love Suicides at Sonezaki”), have been perpetually loved for over 300 years and continue to be performed in various forms. 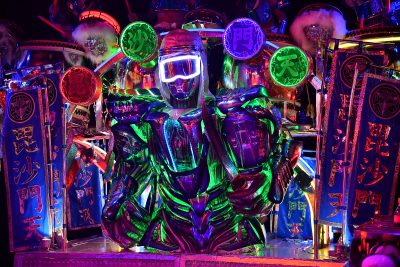 Robot Restaurant: A fantastic world where humans and robots coexist