In pursuit of Japanese Imperfection

Not to be confused with the tear-inducing Japanese mustard wasabi, wabi sabi is a Japanese term that encompasses a profound concept of beauty in imperfection. That doesn’t mean, though, that everything imperfect is beautiful. Simply explained, the imperfection has to reflect the transience of life, futility of mankind and suffering that comes with existence. In other words, a tear-inducing nature of a more poignant kind.

Wabi sabi stems from the Buddhist concept of impermanence, suffering and emptiness, and is evident in all aspects of Japanese aesthetics, from the tea ceremony to temples, art and architecture.

A famous example is the Kinkakuji (Golden Temple) and Ginkakuji (Silver Temple) in Kyoto. While the Kinkakuji is glorious in gold, the Ginkakuji is a subdued in hues of white and dark brown – a stark contrast to its glittering golden counterpart and resembling nothing like its name suggests. Both structures were originally built to serve as a place of peaceful retreat for the ruling shogun. It is said that Ashikaga Yoshimasa, the shogun for whom it was built, was deeply interested in Sado (or the Japanese Tea Ceremony) and Zen Buddhism and had no plans for the Kinkakuji to be plastered with silver leaves – unlike his grandfather, Ashikaga Yoshimitsu, who commissioned the Ginkakuji.

The Kinkakuji, resplendent in gold, vs the Ginkakuji, subdued and dark brown.

The Kinkakuji is often cited as an example of wabi sabi in architecture, and in fact, people who subscribe to the belief of wabi sabi are likely to prefer to the understated elegance of the Kinkakuji to the grandiose Ginkakuji.

For something to be wabi sabi, it must evoke in the viewer a sense of sadness, loneliness, haplessness, regret etc. in response to the recognition of something looking decrepit, incomplete, forsaken or in a state of decline. 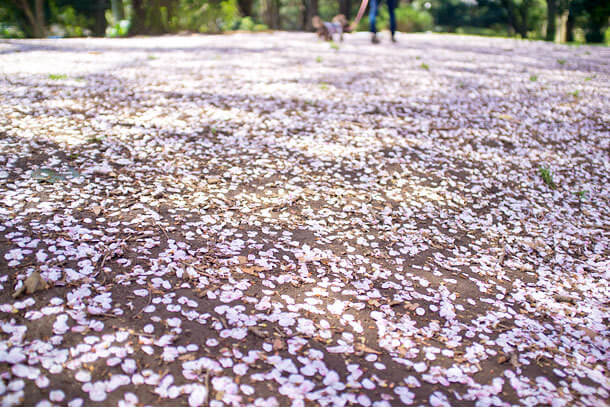 A good seasonal example would be the sakura. These beautiful delicate pink blossoms, said to represent the spirit of Japan, are a fine example of wabi sabi. While breathtakingly beautiful in full bloom, this prime period is extremely short-lived and a few gusts of spring winds can easily leave a tree bare by the end of the day. Yet, part of what makes the sakura special and so precious to the Japanese is its transience. The life of samurai in the past was likened to that of the sakura – to live and die in honor and glory, to value a life led to the full, brief as it may be. The carpet of scattered heart-shaped petals of the sakura on the roadsides or pathways was said to resemble the bodies of samurai who had given their lives in battle.

In fact, closely-linked to the life of the samurai is the tea ceremony, where people from all walks of life would gather in the same hut for a cup of tea. Sado is steeped in wabi sabi, from the plain and bare appearance of the tea hut, to the tea ceremony pottery, which always bears a mark of imperfection – such as a chip on the bottom or a bump on the side – and this is a crucial part of the appreciation in a tea ceremony.

And it is this appreciation of things as they are – as they are born, made or have come to be – that enables one to see beauty in imperfection, to take quiet joy in a withered tree, cloudy day or dry field.

So, next time try taking things with a swab of wabi-sabi and you may find your life richer for it.