Recently, the southern parts of the Japanese archipelago has seen a spike in the number of tourists visiting. What is so attractive about Kyushu (九州)? Shrouded in tranquility, each of the seven prefectures of Kyushu has something special for everyone, from lively open-air food stalls in Fukuoka to hiking up a volcano in Kumamoto or go onsen-hopping in Oita. Stressed out individuals can find some peace and quiet in this laid-back yet beautiful region, with relaxing hot spring baths and majestic mountains.

First on the list is Fukuoka Prefecture and its two main cities – Fukuoka and Kitakyushu. Fukuoka, the most densely populated prefecture in Kyushu,  has about 5 million people in an area seven times the size of Singapore! Closer to Seoul than to Tokyo, the Fukuoka prefecture is a quirky mix of traditional Japan and the modern West.

Present-day Fukuoka resulted from the merging of the port city of Hakata and the castle town of Fukuoka. Thus, some of you may be familiar with Hakata ramen, which comes from Fukuoka. What is so unique about it? The soup uses pork bones and boiled under extreme heat, thereby releasing the characteristic flavour that comes from the bone marrow. The noodles are very thin but firm. Although portions are small, diners can always order extra noodles cheaply – this kaedama system is unique to Hakata ramen.

The most notable underground shopping street in Kyushu is none other than Tenjin Underground City (天神地下街). It is a stretch of European style space filled with various shops of fashion, gourmet, books and more. A unique experience in Fukuoka is definitely eating at one of the approximately 150 yatai (屋台, open air food stalls) in the city. They sell food items from ramen to oden, gyoza, tempura and more.

Try to be early as the area gets crowded, but the stalls remain open till after midnight. Tenjin yatai is popular with tourists and have their menu in English, phew! Micaela Braithwaite is a popular YouTuber living in Fukuoka city, and here is her take on eating at a yatai, where you can get friendly with the locals! Other famous yatai areas include Nakasu 中州 (near Nakasukawabata Station) and Nagahama 長浜 (near Fukuoka City Fish Market).

Museum-lovers will enjoy spending time at the Hakata Machiya Furusato-kan (博多町家ふるさと館), which occupies three traditional Japanese townhouses known as machiya. Housed within this folk museum are buildings and artifacts that reflects a Hakata neighbourhood during the Meiji era. In the Exhibition Hall, you can find everyday objects and crafts of the Hakata people, while the Machiya Hall is an example of old architecture. Elsewhere in the museum are old photographs, recordings of the unique Hakata dialect and artisans available to demonstrate their crafts. Get a gift from the shop selling Hakata ori (folk woven textile) or Hakata dolls to remember your stay!

The nearby Kushida Shrine (櫛田神社) has a long history and is fondly regarded by the people of Fukuoka as “Okushida-sama” (お櫛田様, the god of immortality in Shinto). The locals come to the shrine in the belief that “Okushida Sama” will bless them with long life and prosperity in business.

Prominently located in the shrine yard is the symbolic gingko tree, with two monumental tablets of the Mongolian invasion at its foot. It is most well-known for holding the summer festival Hakata Gion Yamakasa (博多祇園山笠) each year.

Located within the giant entertainment complex Canal City Hakata (キャナルシティ博多) is a “Ramen Stadium” that offers the local favourite Hakata ramen, as well as seven other shops with noodle dishes from all over Japan. Known as “a city within the city”, visitors can stay in the two hotels (the Washington Hotel and the Grand Hyatt Fukuoka) while enjoying the many attractions such as the huge shopping mall, Fukuoka City Theater and the artificial canal that weaves across the complex!

Kitakyushu was once a flourishing port, playing an important role in the international marine trade. Remnants this legacy can be seen in the Moji Port Retro Area (門司港レトロ倶楽部). Take a walk along the promenade to take in the view of the Kanmon Strait. Situated all over the port are countless Western architecture such as the wooden Mojiko Station and the Moji Customs Building. Learn about history of the Kanmon Strait at Kaikyo Dramaship, or ogle at retro locomotive and drive a mini-train at the Kyushu Railway History Museum.

Two local favourite dishes to try is “yaki curry” (焼きカレー, baked curry rice), and fresh fugu (blowfish)! Fugu is so popular that during the annual Fugu, Lights and Hina Dolls Festival, the glow from blowfish lanterns light up the area while the crowd can enjoy blowfish hot pot and even blowfish fin sake tasting.

Also catch the banana auction which is unique to Mojiko!

Moji Port Retro Area: From Hakata Station, take the JR Kagoshima Line and alight
at Mojiko Station. Explore the rest of the sights by foot.

History buffs can spend some time at the castle town Kokura (小倉), which is the starting point for Nagasaki Kaido (長崎街道, an ancient road that leads to Nagasaki Port). The famous Kokura Castle is an imposing structure with one unusual feature – the fifth storey of the castle keep is larger than the fourth. There is a karakuri puppet (からくり人形, mechanized Japanese traditional puppets) theater on the third storey, with many amazing puppets on display. Although small in comparison with the castle, the lush greenery of the Kokura Castle Japanese Garden makes it a wonderful place for a stroll.

Kokura Castle: From Hakata Station, take the JR Kagoshima Line and alight at
Nishi Kokura Station. The castle is 8 mins walk away.

Pop over to the “Kitchen of Kitakyushu area”, also known as the Tanga Market (旦過市場), for some fresh seafood and produce. Shoppers can collect stickers in exchange for vouchers, movie tickets and more. It’s an interesting way to keep the business going! After all the fun, head over to nearby Murasaki River to enjoy the lovely view.

The market also provides stalls for the Wasshoi Hyakuman Summer Festival (わっしょい百万夏まつり), where visitors can check out the “Boat Heaven” expo held at Moji Port, followed by amazing Yamakasa floats at the “Summer Festival Roundup” and the Hyakuman Odori dance consisting of 10,000 participants. Of course there’s always the fancy display of nearly 3,000 fireworks in every Japanese festival.

Tanga Market: The market is accessible by monorail to Tanga Station. OR Take a bus
to Nishitetsu “Tangabashi Quest” stop.

Those eager for some delicious unagi (eel) dishes should make a visit to Inaka-an (田舎庵), a quiet yet posh restaurant specializing in fresh eel caught from nearby rivers that flow into the local Buzen and Ariake Seas. Top on the menu is “Unaju”, a dish consisting of juicy grilled eel drizzled with a sweet-and-spicy sauce and placed on top of fragrant Japanese rice.

Other goodies include the tangy Yuzu Karashi Mentaiko (柚子風味辛子明太子, spicy cod roe is seasoned with yuzu fruit), and Unagi Chazuke (鰻茶漬, eel with green tea rice gruel). Both dishes are available from grocery stores and are recommended souvenirs to take home from Kokura!

Inaka-an: From Hakata Station, take the JR Kagoshima Line and alight at Kokura
Station. The restaurant is 5 mins away on foot.

Make plans for an exciting day of fun at the world’s first space theme park, Space World. The rides range from mild to thrilling, where the heart-stopping “Titan V” leaves you craving for more. Like every theme park, there are family-oriented shows in the “Galaxy Theater”, or a cooling water ride in the hot summer.

Space World: From Hakata Station, take the JR Kagoshima Line and alight at
Spaceworld Station. The amusement park is 5 mins away on foot.

Although original established as an administrative centre for Kyushu in the 7th century, Dazaifu also played a significant role in Japan’s diplomatic negotiations with foreign countries and defended Western Japan.

A lingering memory of the city’s administrative legacy can be seen in the Government Office Ruins (大宰府政庁跡), which showcase the remaining stone foundations of the government offices. The scale of the ruins gives us a glimpse of the enormity of Dazaifu’s administrative centre.

Today, the city lies in the outskirts of busy Fukuoka City and serves as a quick getaway for locals and international visitors. An icon of the city is the famous Dazaifu Tenmangu Shrine (大宰府天満宮), which houses the deity for academic excellence, Sugawara Michizane. Students from all over Japan come to the shrine to pray for passing the entrance examinations or academic achievements. 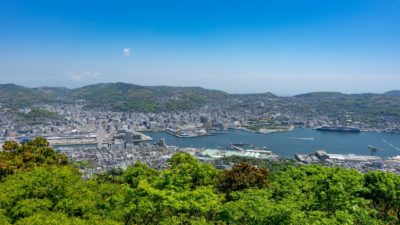