Although Saga Prefecture (佐賀県) is the smallest in Kyushu, it played an important role in Japan’s history as a hub for trade and transmission of culture between the Japanese archipelago and mainland Asia. Rich in nature, a large portion of the region is covered by forested and agricultural lands. As such, one can expect high quality produce such as Saga beef, strawberries and mochigome 糯米 (sticky rice). One other speciality of Saga is ceramics from the towns Karatsu, Imari, and especially Arita.

As with every Japanese city, its castle is one of the main attractions. Sadly, the Saga Castle was destroyed by fires during the Saga Rebellion of 1874, where only the gate known as Shachi-no-mon survived. Originally built on a plain instead of a hill, Saga castle was surrounded by a wall. The main keep of the castle was reconstructed by Naomasa Nabeshima during the late Edo period and and is the largest wooden structure in Japan. It is now home to the the Saga Castle History Museum. Nabeshima lived simply and encouraged people to do the same, so as to prevent the Saga domain from falling into debt. This is evident from the design of the castle keep / museum.

As you wander around the city, much of its history can be seen it its buildings, from old samurai residences to “kurazukuri-style” (warehouse style) buildings from the Meiji era, forming part of the Saga City Cultural Museum (佐賀市歴史民俗館). For example, the first floor of the Former Koga Bank (旧古賀銀行) is now a cafe and concert venue, while the Former Nakamura House (旧中村家), now converted into a restaurant with traditional bento set meals!

The Saga International Balloon Fiesta is annually between end of October and early November in Saga City. For 2015, 20 hot-air balloons from 20 countries will be participating in Asia’s largest hot-air balloon competition. It’s the perfect opportunity for photography enthusiasts to capture amazing shots of the many hot-air balloons against a backdrop of clear, blue sky and vibrant, green grass.

Catch a glimpse into Japan’s past by visiting the archeological sites at Yoshinogari Historical Park (吉野ヶ里歴史公園), which showcases reconstructed settlements from the Yayoi Period (300 BC to 300 AD). Thought to be the remains of “Yamatai”, an ancient country in present-day Japan, unique pit dwellings from this period can be seen. Do not miss the Minami Naikaku, which is enclosed by defensive walls and moats. Within it lies lies the Ruler’s Residence.

Apart from the reconstructed settlements, one can spend the day visiting a museum dedicated to the ancient forest that covered the area, or try your hand at stone carving and how to use a bow-drill to start a fire.

Karatsu is full of natural and scenic locations, such as the beautiful Japanese black pine forest arc known as Niji-no-Matsubara (虹の松原). The pine trees were initially planted by the first lord of Karatsu clan (Terasawa Hirotaka) along the coastline as a counter-measure against the strong winds and tides.

The small town of Yobuko (呼子) is well-known for its fresh squid, which is usually eaten raw. The Yobuko Morning Market is one of the three major morning markets in Japan. With over 40 stalls on weekdays and more during the weekends, visitors can eat their hearts out with the large selection of fresh and dried seafood, vegetables and fruits.

The Nanatsugama Caves (七ツ釜) are seven large caverns carved out by the raging waves of the Sea of Genkai. The largest of them has an opening of 3 m and a depth of 110 m. Ferry services are available to bring visitors up close to the caves, while there is a lookout and walking trail above.

Home to one the the world’s most famous ceramics, Arita-yaki (有田焼), originally a type of blue and white porcelain with a pattern drawn on a white background. New styles such as the Kakiemon introduced colours and resulted in vibrantly-colored porcelain, which appealed to the Europeans in Nagasaki. Hence, Arita-yaki was exported to Europe from Imari port and both styles were called Imari-yaki (伊万里焼). Nowadays, there is a distinction between both styles, which are named according to the place where they were produced.

Many of the attractions are also related to pottery, such as the now-defunct Izumiyama Quarry (泉山磁石場) where the discovery of kaolin stone (raw material for Arita-yaki) led to the development of this region as the centre of porcelain production. Take a look at this beautiful video about Arita-yaki, where the quarry can be seen in the first 30 seconds of the video.

Dedicated to the influential Korean potter Ri Sampei (the father of Arita porcelain), the Tozan Shrine / Sueyama Shrine (陶山神社) is famous for having both its torii gate and komainu (guardian dogs) made out of… PORCELAIN! Built at the foot of a mountain, you can expect to have an amazing view of the town, as well as blooms of cherry blossoms, azaleas and altheas (the national flower of Korea).

Further away from the town center lies the Arita Porcelain Park (有田瓷器公園), an interesting porcelain-related theme park which contains a reproduction of the Zwinger Palace in Dresden, Germany. Some of ceramics exhibited in the gallery were produced during periods of export boom (the Bakumatsu period and the Meiji period). One noteworthy exhibit is a 1.82m high flower vase exhibited during World Exposition in Vienna in 1873.

Apart from Arita-yaki, visitors also have the opportunity to tour the sake brewery and have a taste for yourself!

Fukuoka Prefecture and its two main cities – Fukuoka and Kitakyushu. Fukuoka, the most densely populated prefecture in Kyushu, has about 5 million people in an area seven times the size of Singapore!

Note: Details may have changed since the publication of this post. For the most current information, please check the homepage of the facility, product or campaign. 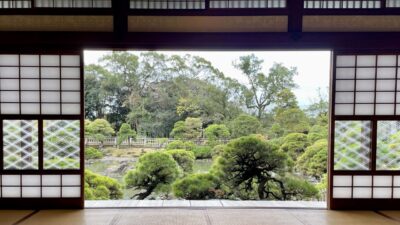