For the typical foreign tourist to Tokyo, a stop at Asakusa’s temples and souvenir shops is a must. Visitors tend to stop by the edge of the Sumida river and take pictures with the iconic Tokyo SKYTREE in the background. However, not everyone ventures across the Azuma-bashi Bridge into Sumida ward. Home to the imposing Tokyo SKYTREE, the other side of the Sumida river is quieter but no less interesting. There is an authentic feel to it. While exploring the calm streets peppered with hidden history and art in the most unlikely places, we encountered the spots which are apparently the inspiration of Hokusai Katsushika, one of the most influential Japanese artists.

It was a clear, sunny morning and Tokyo SKYTREE was gleaming against the bright blue sky. Before my neck could start aching from gazing upward, we entered the maze of shops and restaurants at its base. Eager to catch the view, we went straight to the observation decks. First, we got our tickets at the FAST SKYTREE TICKET COUNTER located on the 4th floor. Conveniently, this line allows international visitors to skip the long wait. 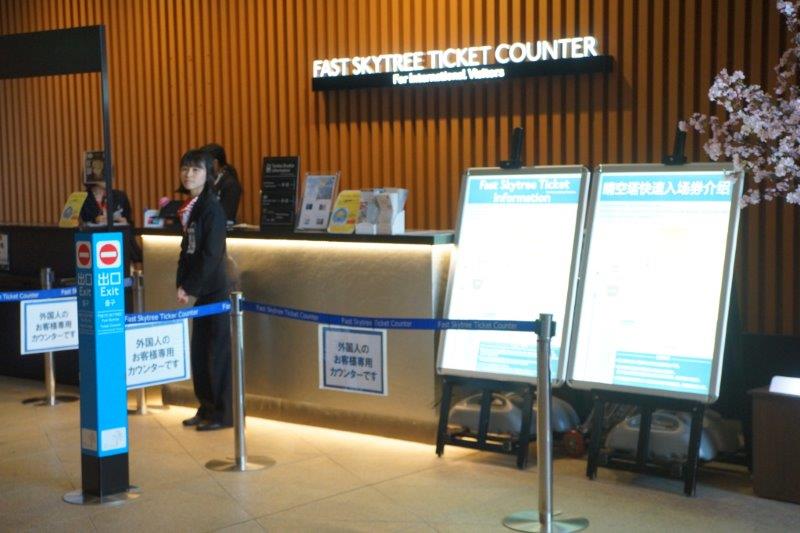 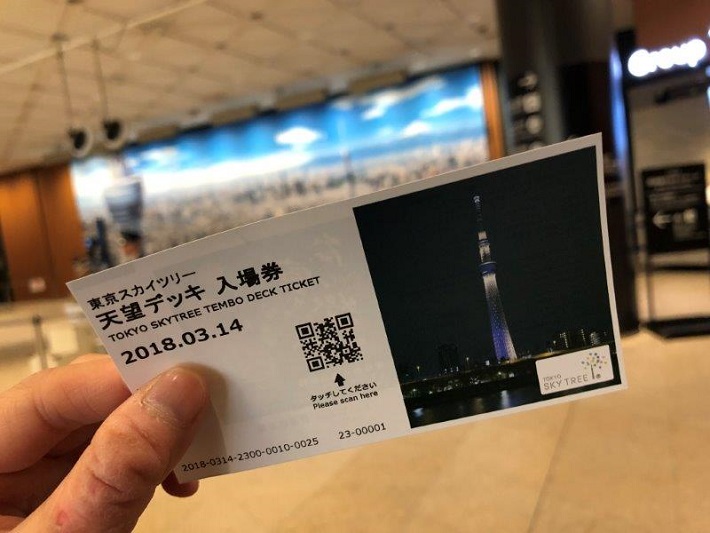 Next, the guide led us through a futuristic hallway adorned with dancing lights the the elevator. Ascending in the elevator was surprisingly smooth, and the only indication of its incredible speed is a monitor which display an incredible speed of 600 meters per minute. Before I knew it, our ascent was over as we reached Tembo Deck.

When the elevator doors opened, my eyes had to adjust to the bright light from the wide panoramic windows. After a moment, the crawling metropolis of Tokyo came into focus. Before me, an impossibly intricate grid of gray-bluish silhouettes stretched into in the distance, with some landmark buildings being instantly recognizable.

I tried identifying familiar places among the endless puzzle of buildings which resembled little boxes on an architect’s model. With the help of the touchscreen panels, I was able to locate famous landmarks and even see what the view is like during nighttime. However, the sight of everyday scenes such as students gathering in a schoolyard or the winding train tracks intrigued me most, as the massive shadow of the Tokyo SKYTREE cast over the city like a sundial. 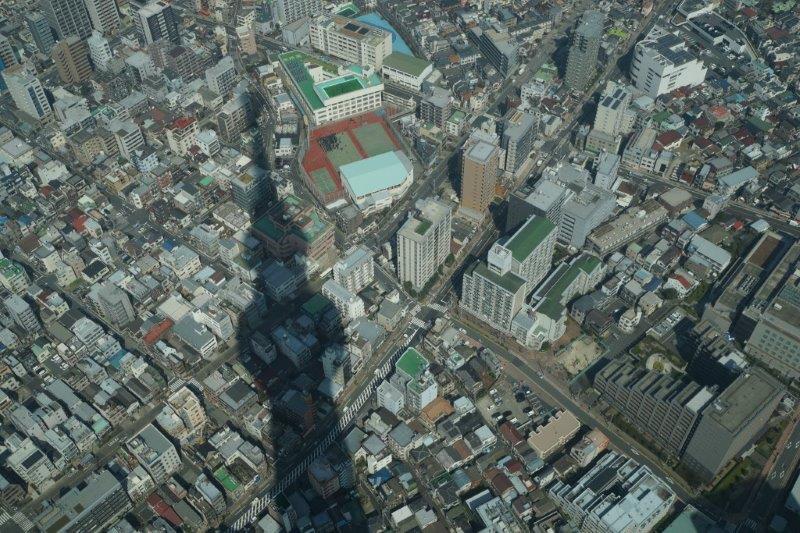 After completing a tour of the Observation Deck, I explored the souvenir shop and reluctantly stepped onto the glass floor. From here, visitors courageously peek down at both the city below and the gigantic metal rods supporting the tower. 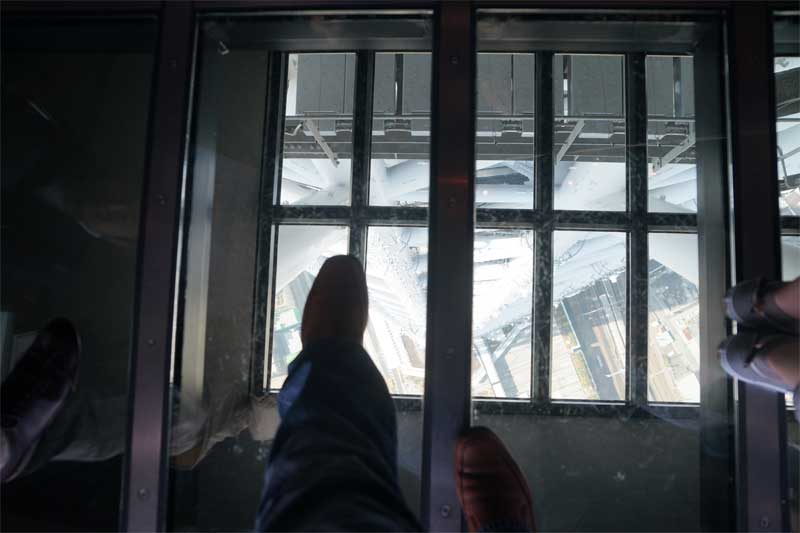 As if 350 meters wasn’t high enough to weaken your knees, we decided to hop on a different elevator to the Second Observatory, which is 450 meters high. This elevator offers more a thrilling ride, featuring a window on the door and emphasizing the height as it increases.

Local Crafts and Art to Buy Around Tokyo SKYTREE

After taking it all in, we got back to earth on the ground floor and stopped at Sumidamachi Dokoro. This area offers local crafts, souvenirs and a corner introducing Sumida ward’s history and products. It also features a space where local artisans present their unique creations and showcase their skills to curious visitors.

The items for sale at Sumidamachi Dokoro are unique in that they represent both the contemporary and traditional side of Japanese creative genius. The range includes traditional slippers and intricately decorated dolls, to kawaii robots made out of tin to sparkling jewelry and whimsical mobile phone danglers. My time at Sumidamachi Dokoro learning about Sumida ward’s endless artistic spirit made me want to discover even more unique crafts.

Our first stop was a legendary folding screen shop that has mastered the art of combining elegance and practicality in their creations.

In addition to decorative souvenirs that add a Japanese touch to any room, Kataoka Byoubu’s folding screens offer visitors a unique piece of traditional craftsmanship that has never ceased to evolve.

“Folding screens were originally imported from China around 1,300 years ago, and along with the techniques for making them, they underwent a transformation unique to Japan” Koto Kataoka, the store’s third-generation artisan told us.

How Hokusai Left an Impression in Local Art

In a modern twist and with the influx of foreign tourists, Kataoka Byoubu’s folding screens feature several of Hokusai’s most famous prints. Most of them appear the artist’s popular series “Thirty-six Views of Mount Fuji”.

“For example in the Great wave of Kanagawa, you see an image that you could only have been taken with a camera at 1/10000 of the shutter speed, but he would just imagine it and draw it, fabricate it. It was something that other old painters didn’t have. It was said he was a strange person, so that also increased his appeal”, Kataoka-san said when asked about regarding Hokusai’s popularity both in Japan and abroad.

Born and raised in Sumida ward for most of his life, Hokusai is an unofficial ambassador for the area. As a result, visitors can enjoy a variety of his works at the recently opened Sumida Hokusai Museum.

Besides admiring the works of art in Sumida, you can also visit the scenes that inspired Hokusai. Travel in time as you learn about the different sites’ connection to the woodblock print artist.

Along our Hokusai pilgrimage, we stumbled upon Sumida Park. This peaceful scene combines a Japanese garden with the Tokyo SKYTREE in the background, acting as reminder of changing times.

We gathered around the pond to take in the quiet atmosphere, and spotted lazy turtles sunbathing on the rocks. Nearby, bird watchers patiently waited with their cameras ready to shoot. Meanwhile an old man on the shore sang a nostalgic song as he played the samisen, a three-stringed Japanese instrument. It resembled a scene straight out of a Japanese woodprint. Perhaps Hokusai himself had witnessed a similar scene while living in Sumida. 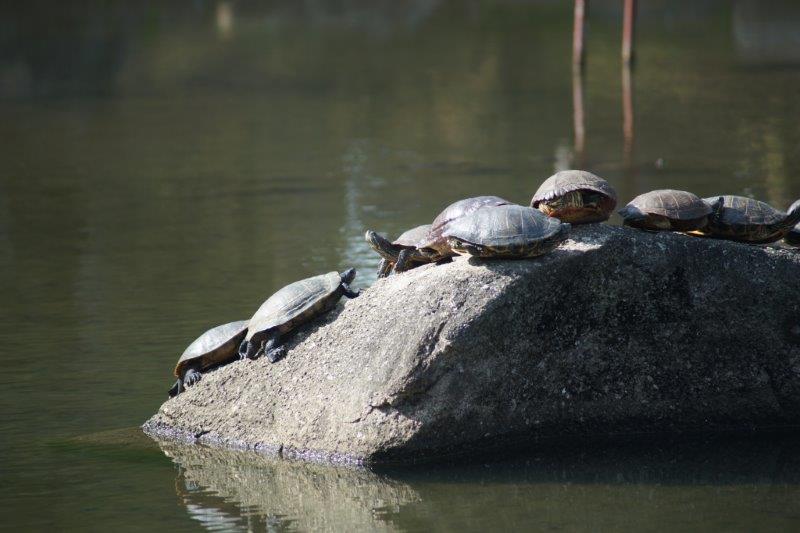 Ushijima Shrine is famous for the Nadeushi, a statue of an ox. In fact, stories say it has the power to heal you if you touch it in the same place that troubles you. 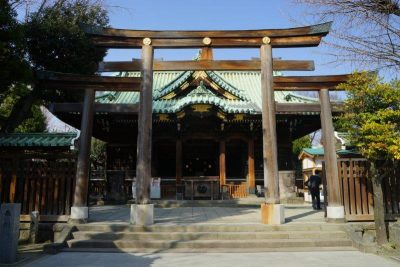 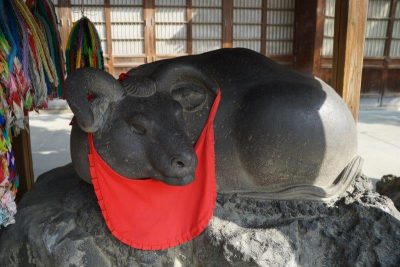 Hokusai apparently donated one of his masterpieces “Susanoo-no-Mikoto Yakujin Taiji no Zu” to the Ushijima Shrine. His painting depicts the god Susanoo-no-Mikoto fighting 15 personified diseases. However, it was unfortunately lost during the fire caused by the Great Kanto Earthquake in 1923. A black and white photograph of the masterpiece was all that remained until a group of experts restored the painting with its original colors. Now it rests safely at Sumida Hokusai Museum.

Then and Now: Hokusai’s Painting of Mimeguri Shrine in the Edo Period

We continued our quiet walk along streets, but stopped here and there to peek into the lives of local artisans. Among others, people making traditional Tabi (traditional Japanese socks) and modern T-shirt designers labored diligently. Eventually we wound up at another shrine located in an even quieter part of Sumida. 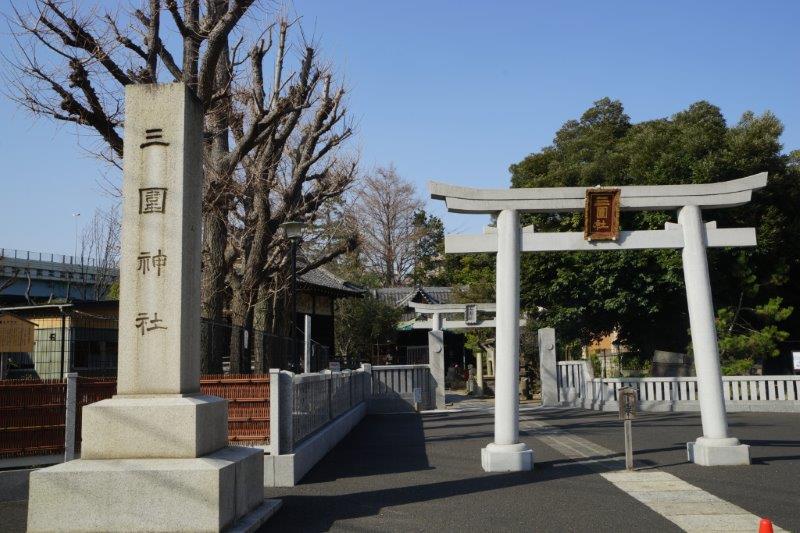 Mimeguri shrine is a “power spot”, an expression which is borrowed from English. Power Spots emit special or spiritual energy, and attract people looking to recharge or purify their body and mind. Perhaps due to the placebo effect, I soon started to feel a mysterious calmness and a tingling sensation in my fingertips. Strolling around the shrine’s unique, triangular layout, I encountered vermilion torii gates and kitsune, which act as messengers for Inari, the goddess of prosperity. Additionally, there was also a well protected by a structure that looked like three torii gates fused together. 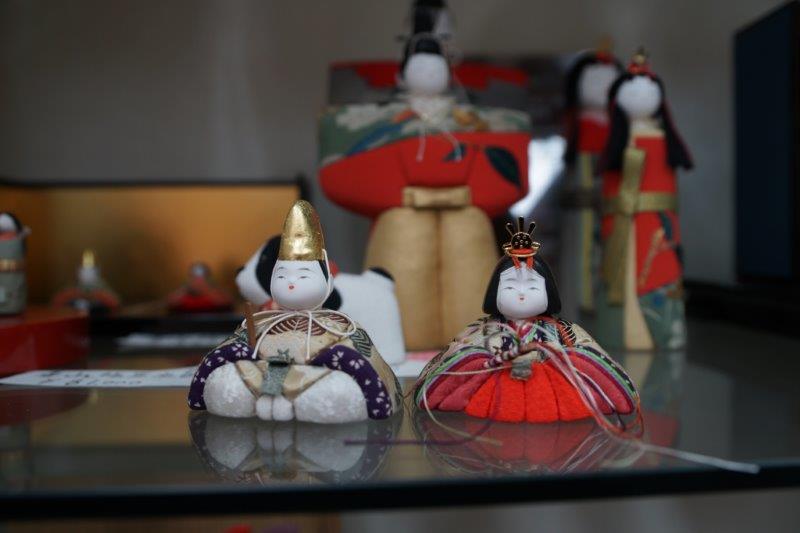 Of the many studios we encountered, we decided to spend some time at Edo Kimekomi dolls. The studio offered endearing Japanese characters made with the traditional kimekomi method. Kimekomi consists of carving small dolls out of willow wood and decorating them with cloth straps. Hina dolls, the maneki-neko beckoning cat and cute owls, are among the most popular items. 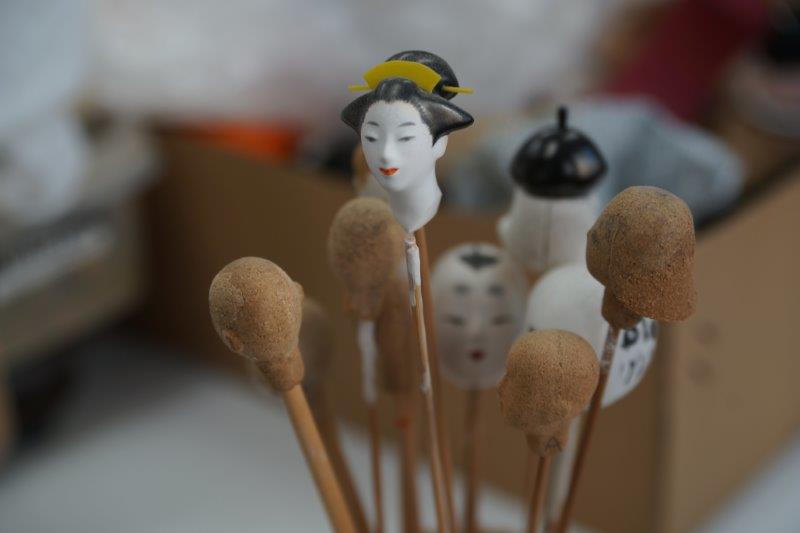 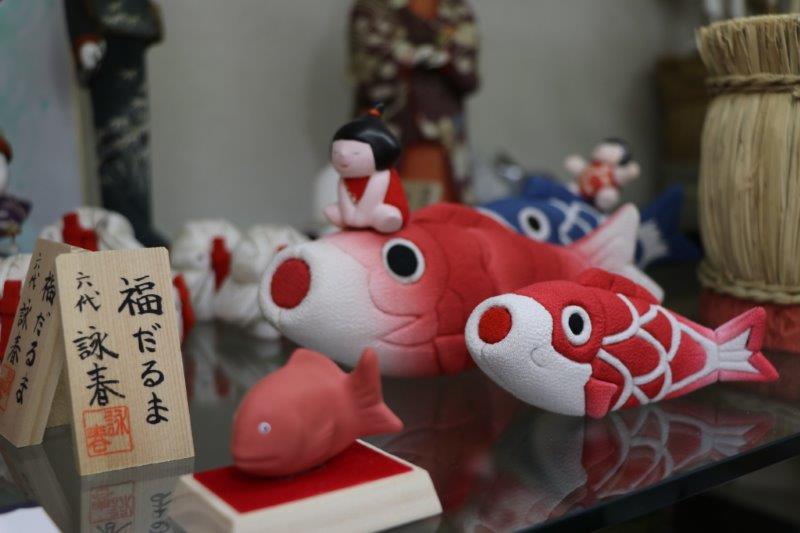 This little studio offers a kimekomi doll making experience. Fortunately, all the necessary materials and guidance are fee.

The next stop on the map was Shirahige Shrine, featured in Hokusai’s series of the comical tanka prints “Panoramic Views on Both Banks of the Sumida River” 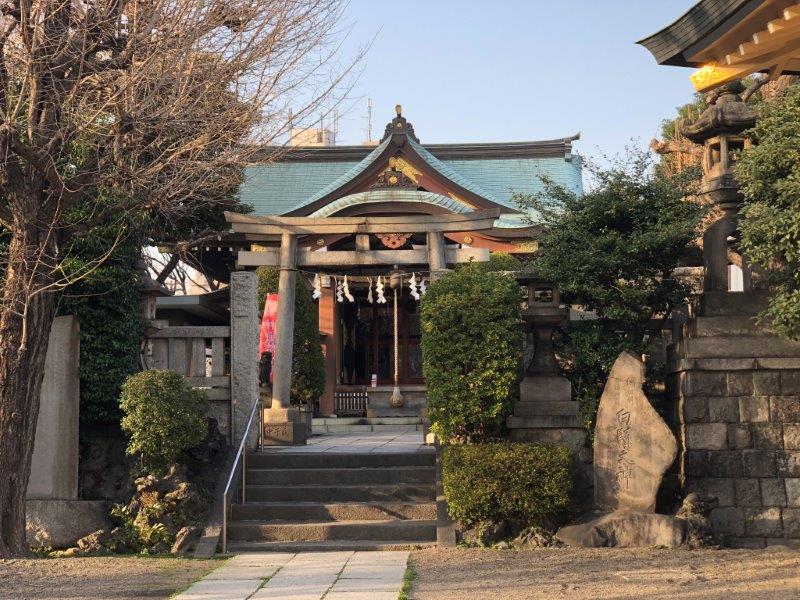 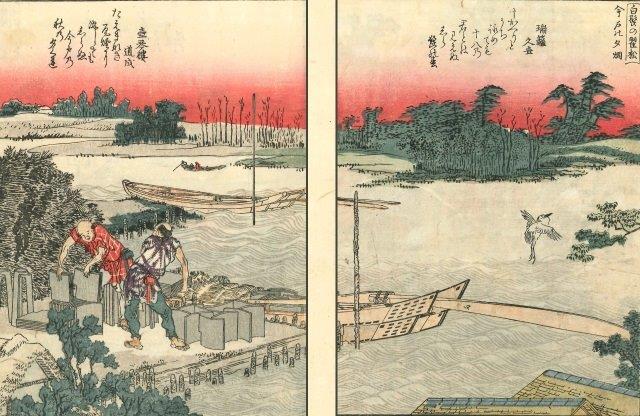 Although at the beginning I had expected to recognize the shrines featured in Hokusai’s prints, I soon understood that it would be almost impossible amidst the urban sprawl of Sumida ward. Furthermore, Hokusai often chose to draw elements from his own imagination with highly stylized visual language. Consequently, the scenes that were the inspiration of Hokusai were altered by his unique vision. 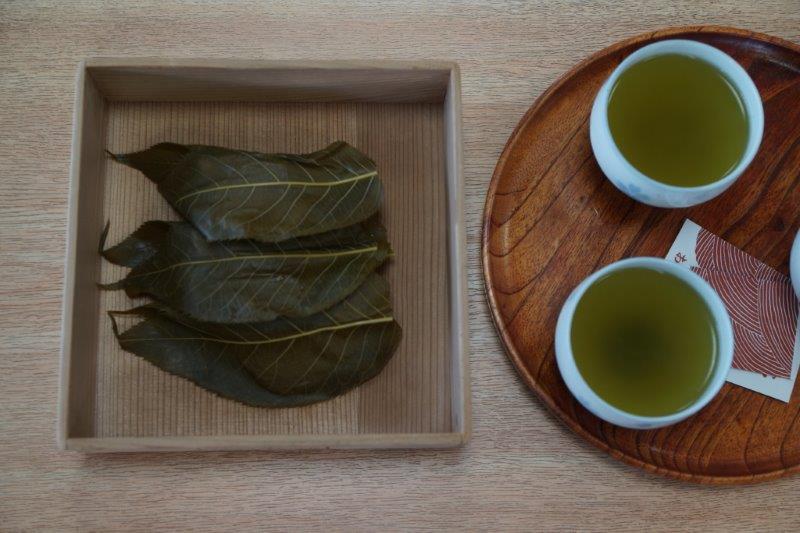 After almost a whole day of walking, it was time for refreshment. Luckily, we couldn’t have found a better way to stay in theme with Hokusai’s time, than to try the legendary Sakuramochi of Mukojima Chomeiji. People have enjoyed the confection of sweet mochi rice filled with red bean paste and wrapped in a cherry blossom leaf pickled in salt since the Edo period.

The combination of the salty, tender leaf with the sweet mochi and bean paste was delicious. Additionally, the delicate flavor of the green tea was soothing.

Next, we reached the the Sumida River shrine which inspired another of another of Hokusai’s masterpieces, Setsugetsuka Sumida. It now lies partially in shadow by the highway running behind it. But back in the Edo period, the waters of the Sumida river reached all the way to the shrine. In fact, people dubbed it the Water Shrine.

To wrap up a day full of history and art, we stopped by Honsenji and Mukobuji. Hokusai’s work also appears at these two temples.

According to estimations, Hokusai made this print between the age of 60 and 70 and it depicts people attending the Hosenji temple to pray. Perhaps their prayers were also an inspiration of Hokusai. Today, the print is a Sumida-ku Tangible Cultural Asset.

Mokubuji temple relates to the legend of Umewaka. In the story, a boy who is separated from his mother and dies near the Sumida river. After learning about his death, the mother becomes insane and roams around looking for him. The tale, although sad, was an inspiration of Hokusai. Touchingly, he reunites the tragic pair in a painting of a lovely boat ride.

How to View Tokyo SKYTREE at Night from Kanegafuchi Station

As the light faded, we snapped this picture of Tokyo SKYTREE from Kanegafuchi Station. It had been popping in and out of sight along our journey, so ending the tour here seemed like the perfect way to wrap up the day.

Encountering all the local places serving as inspiration of Hokusai work made me realize why he is such an outstanding and prolific Japanese artists. For him, however, it was probably not enough. In fact, at the age of 88, near the time of his death, he reportedly muttered:

If only Heaven will give me just another ten years… Just another five more years, then I could become a real painter.

*All the paintings featured in this article are exhibited in the Hokusai Sumida Museum.