What is Noh? The word literally means “skill”, and is a form of classical drama, created in Iga by Kan’ami Kiyotsugu during the Muromachi period in Japan (14th century). Kiyotsugu incorporated story, dance and music into a single art form, training his son Zeami Motokiyo and creating the first Noh school in Yamato (present-day Nara).
Noh plays are often based on traditional literature with an array of supernatural beings, heroes and villains. Stories range from love and war, to betrayal and death, yet all Noh plays contain Buddhists elements, including ideas of transcendence, change, wabi sabi and imperfection. Nothing is clear cut in a Noh play, and at the end of the performance, the audience is always left thinking about the intrinsic nature of existence.

Two of Wattention’s reporters attended a Noh Theater Workshop by the Kita Roppeita XIV Commemorative Nogaku Theater. How does it feel to see Noh both on stage and backstage? How can one understand the intricacies of a Noh play? These are some of the questions that our writers can answer.

“Japan is a country of many traditions, but it’s hard to find something more authentically Japanese than Noh theater, and just as hard to find a play more famous than Sumidagawa.” – Jude Austin, WAttention NINJA reporter

“The day was a rewarding one, and after the event I came away with a clearer understanding of this traditional art form.” – Mark Williams, WAttention NINJA reporter

The Joy of Noh – Classical Theater for the Modern World

Within the modernity of Tokyo’s Meguro, the Kita Roppeita XIV Commemorative Nogaku Theatre is a small enclave of Japanese tradition with a clear goal – to connect the modern world to Noh, one of Japan’s most ancient art forms.

The Kita Roppeita Theater seeks to bring these classical Japanese tales and principles to a wider audience by reducing the ‘mystery’ of Noh and making it more relatable to a modern world. One emotion common to all cultures is that of the love a mother has for her child. It is for this reason that the Kita Roppeita has chosen to perform the play “Sumidagawa” next year (2019).

The story, performed by actor Takehito Tomoeda, is heart-wrenching and outlines the journey of a mother, who leaves her home in Kyoto to make her way to Edo (Tokyo) in search of her son. The play links itself with several poems from the book, Ise Monogatari, including this message of love – “O, birds of Miyako / If you are worthy of your name, / Tell me, does my love still live?”

This same story was turned into a musical by English composer Benjamin Britten who modernized it for an European audience, adapting the story to an East Anglia setting. 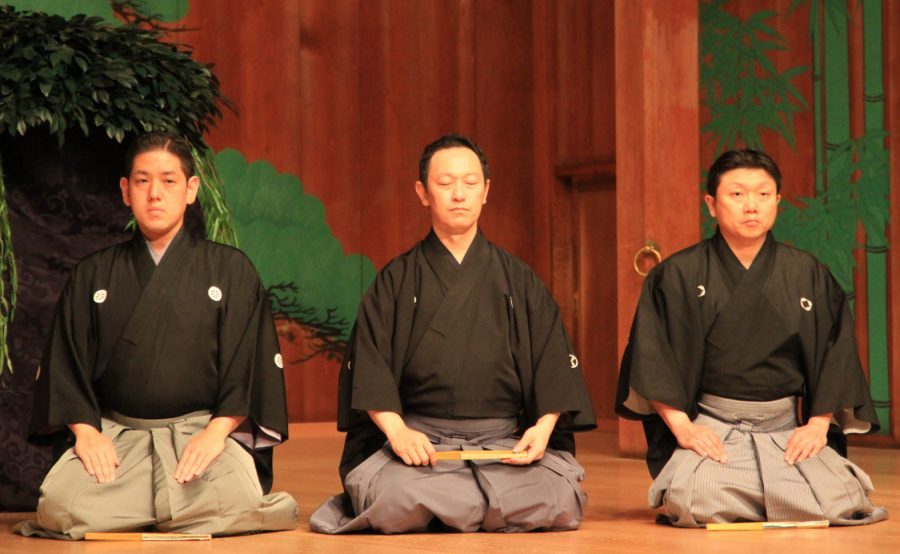 The play is rich with Buddhist teaching and to truly appreciate it, some explanations are necessary. As a part of the program, several guests have been invited after the performance to explain the meaning behind Sumidagawa’s themes. These include a Noh voice trainer, Yoko Yamamura, who will cover the musical aspects of the play, and Japanese literary scholar Professor Robert Campbell, who will provide commentary on the performance itself. On the preview we attended, the chief performer, Takehito Tomoeda, along with other members of the company, gave an interesting account of Noh history, the play and the philosophies behind it. The session included an understanding of Noh music, culminating with the audience learning and singing a small part of a Noh chorus. 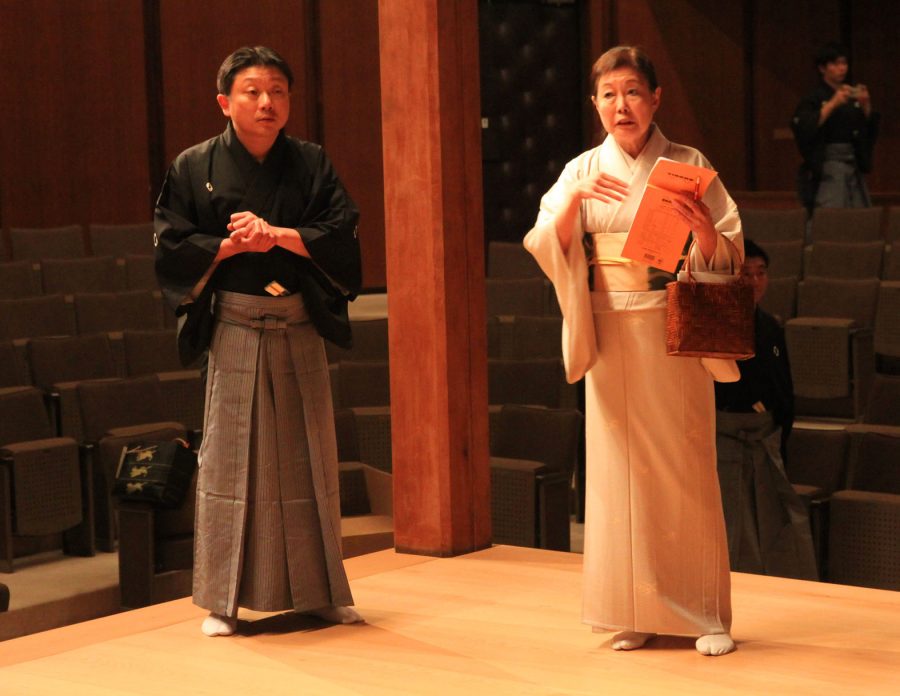 The session concluded with a tour of the Noh stage itself where recognizable characteristics were explained, including the independent hanging roof, four column support, architectural design (based on Shinto traditions), and backing pictorial representation of a pine tree.

A Noh stage is very different to an English stage. Walking down the hashigakari corridor, past the three pines and onto the stage, gave a real perspective as to the simplistic, yet complex space the actors must perform within. Like many aspects of Japanese tradition, the juxtaposition was amazing. 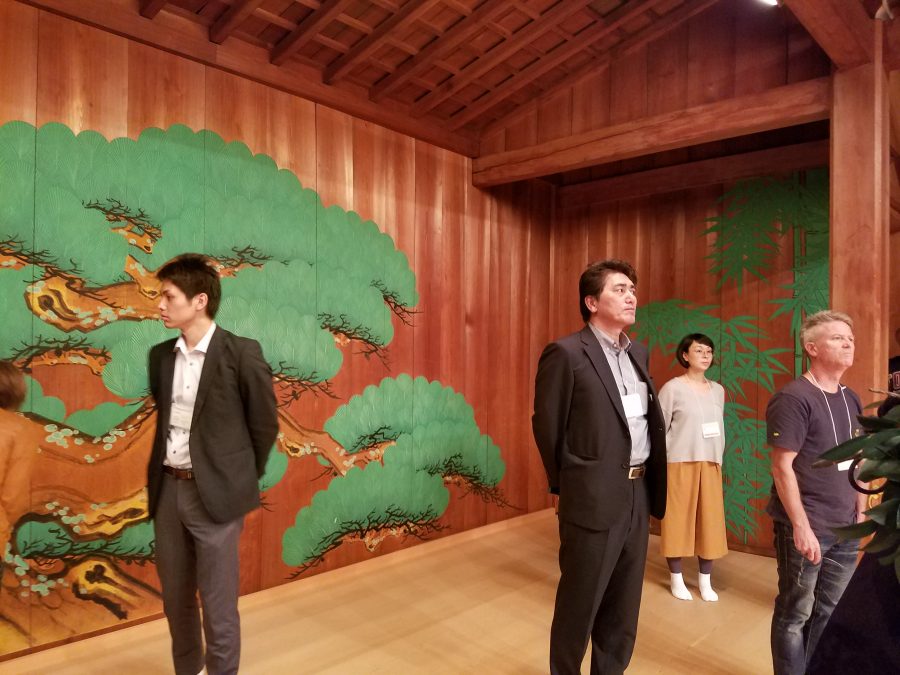 The day was a rewarding one, and after the event I came away with a clearer understanding of this traditional art form. The full play will be performed on Saturday, February 23, 2019. The story and associated commentary will give the audience a truly amazing experience. Organised by the Arts Council Tokyo, this play gives a valuable and unique glimpse into an ancient past. Expressing feelings that are still relevant today, Sumidagawa is a must see! 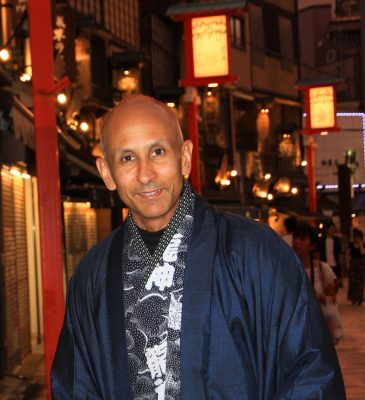 Mark Williams was born in England and graduated with a Masters Degree in International Relations. After teaching at Adelaide University in Australia, he recently moved to Tokyo to teach. Despite struggling with the language, Mark has developed a strong passion for Japan, its traditions and sports. He loves music, nature and photography, and enjoys travelling – especially in Tohoku. When he is not working or perusing his hobbies, Mark can be found in a local bar or coffee shop soaking up the atmosphere!

Noh Workshop and Sumidagawa –
A Story 600 Years In The Telling

“If the audience hasn’t burst into tears by the end, we’re doing it wrong.”

These were the words of Noh director and lead actor Takehito Tomoeda at the Noh workshop I attended in Gotanda, when he was explaining the essence of the famous Noh tragedy, Sumidagawa, which centers around a mother’s journey to find her missing son. 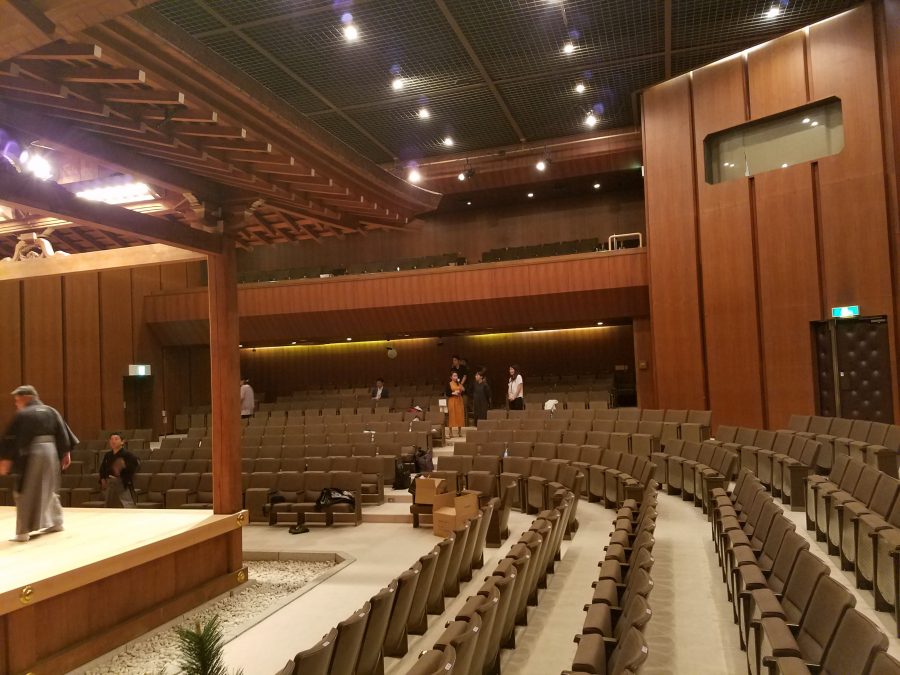 Unlike many stories and plays which tend to be changed and rewritten with every new production, Sumidagawa remains completely faithful to its original source material from six hundred years ago, which in turn draws from the Tales of Ise. This means that the version you watch on a Japanese stage today is identical to the original penned by Kanze Motomasa. 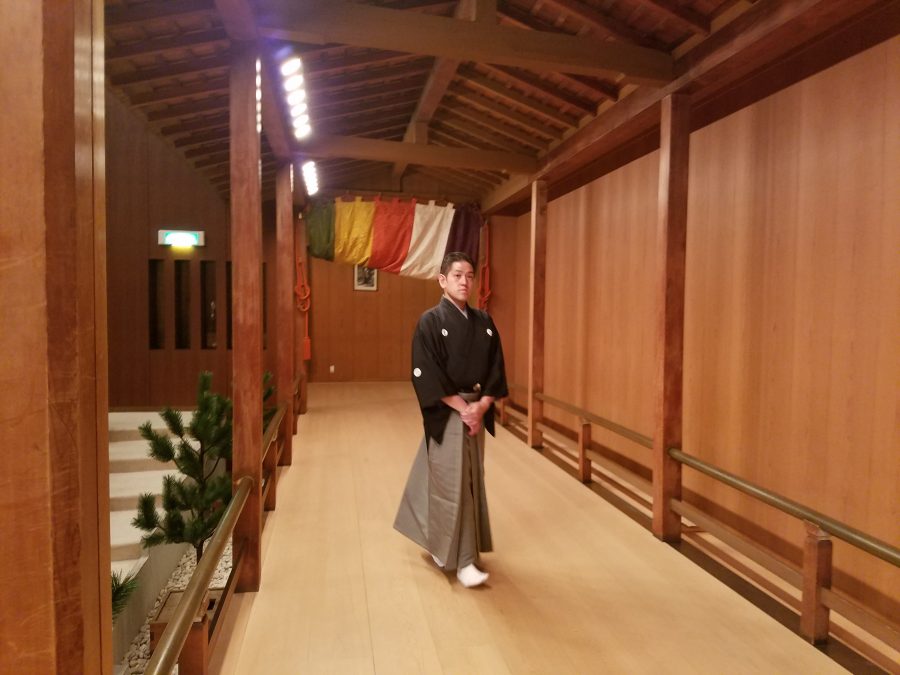 Tomoeda-san‘s intention is to bring Noh to everyone, so not only is the workshop bilingual (with English translations provided on the spot) but he’s careful to choose productions which appeal to international audiences. Previously, his company performed Okina, which has the unique distinction of having no lines and so can be enjoyed by anyone regardless of Japanese ability.

Speaking as an acting student and someone who has a fair amount of experience in the theater, I was nevertheless on tenterhooks as I walked into this Noh workshop. Would we be dressed up in full costume? Would we be given our own Noh mask as a souvenir?

As it turned out, neither of those things happened. Instead, we listened to a condensed history of Noh theater (the father of which, Zeami Motokiyo, was also the father of the play’s writer, Kanze Motomasa) and the story of Sumidagawa. 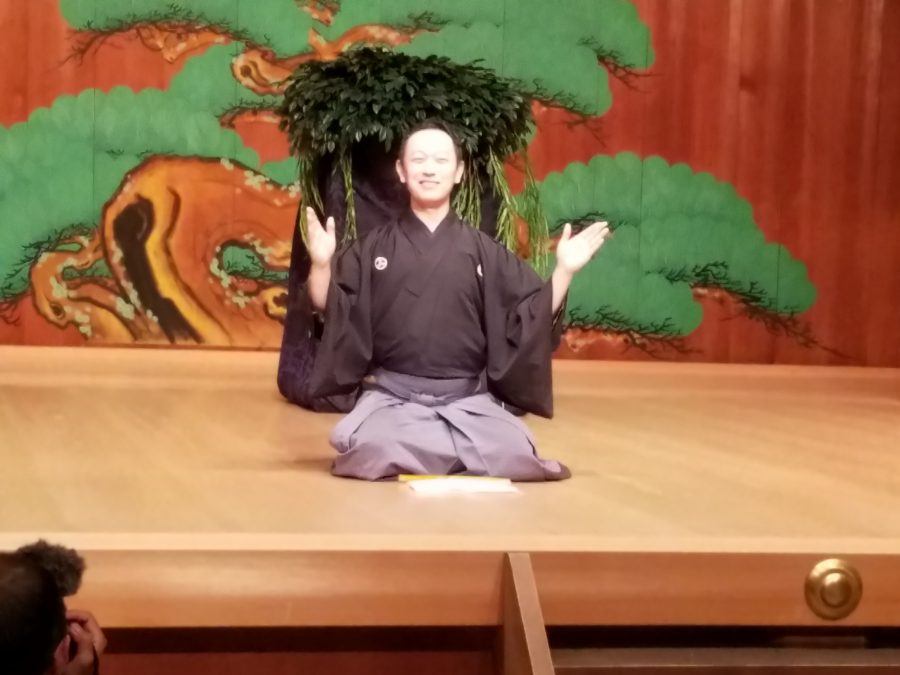 We were then treated to a sample of the Buddhist chant from the play, and encouraged to have a go ourselves with the help of a lyrics sheet which had been handed out at the start of the workshop. Once the chanting was finished, we were allowed up onto the stage, which is unlike normal theater stages. In Noh theater, there is a pillar at each corner of the stage, as the masks make it very difficult for the actors to see the edge. Pine trees are a fixture of Noh theater, as their coniferous nature means that the same set can be used for all seasons. There’s also a fake roof, in homage to the original design of Noh theater, in which plays were performed outdoors and the stage required a roof to keep the actors dry. The audience weren’t so lucky, but not to worry; theater design has changed even if Sumidagawa hasn’t. 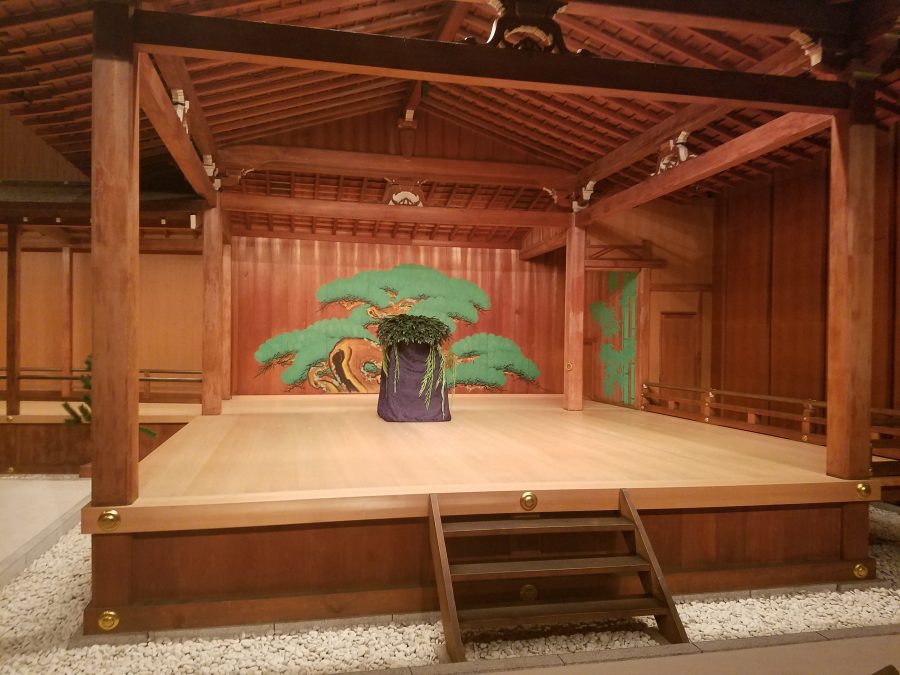 Anyone who wants to experience one of the most famous Noh plays in a beautiful theater should look no further; the play and the workshop afterwards at the Kita Noh Theater are all you could possibly need. 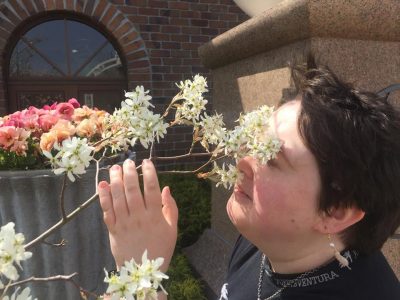 Jude Austin sold her first story to a magazine at the age of twelve and has been writing ever since. In the past, she’s dabbled in various jobs from care worker to roulette croupier to language tutor, all the while scribbling down various ideas and frightening random people by asking them equally random questions about astrophysics, medicine, genetic science and whether or not it was really true that people could explode in outer space.She currently lives in Japan, where she divides her time between studying film production at college, watching Japanese TV, working on her next few books (her latest sci-fi thriller Project Tau is currently available on Amazon) and hunting for the perfect takoyaki vendor while trying to have random encounters with members of Arashi.

More details about the venue, schedule and tickets on their official website and on the website of Arts Council Tokyo.