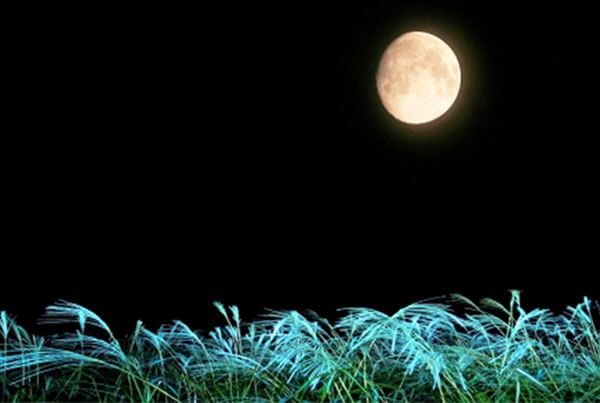 Like with hanami (flower-viewing) and yukimi onsen (snow-viewing in a hot spring), the Japanese make it a habit to sit down together and marvel at the signs of passing seasons. For autumn, people celebrate tsukimi in Japan by having a moon-viewing party. However, unlike hanami that can turn rather boisterous with much drinking and celebrating, tsukimi in Japan (moon-viewing) is a solemn and quiet affair. Perhaps it’s the chill of the night wind, colder now as summer dissolves into autumn. Or maybe it’s that deep, inexplicable feeling of longing that people get while gazing at the moon’s achingly beautiful glow. Whatever the reason, enjoying the Tsukimi Festival in Japan is a wonderfully poetic experience everyone should experience!

The festival’s tradition in Japan dates back to the Heian era. Like some other Japanese traditions, this autumn moon-viewing party began in China and eventually spread to Japan. It became a tradition for court nobles to celebrate tsukimi in Japan by throwing lavish banquets on boats or nearby a pond that reflects the moonlight. During the celebrations, there would be music performances and poem recitals dedicated to the moon. Rabbits are also a recurring theme because when Japanese people see the moon’s face, they see the shape of a rabbit pounding mochi. Go ahead and look for a rabbit on the moon the next chance you get! Traditionally tsukimi in Japan falls on the 15th of the 8th month of the old calendar. However, you can experience the feeling of tsukimi in Japan anytime you look up at the moon.

In most homes, people would put susuki (pampas grass) to represent bountiful rice plants. Also, Japanese seasonal fruits and produce make a welcomed appearance as traditional tsukimi food. The spread of Japanese tsukimi food includes persimmons, chestnuts, as well as tsukimi dango (rice dumplings). Tsukimi dango have a special meaning during the autumn moon-viewing celebrations in Japan. That’s because the round, white treats resemble the full moon. People believe eating 12 for each month or 15 for the day of the full moon brings good luck. The tsukimi food is placed in view of the moon as an offering and a sign of gratitude for a good autumn harvest. 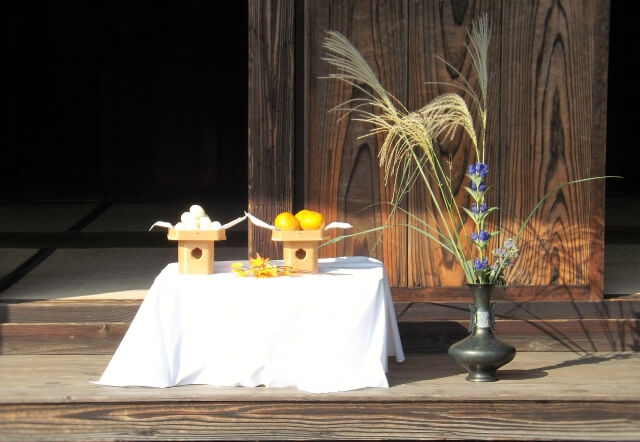 Not all tsukimi traditions are as serious and solemn, though. In fact, many food joints, including fast-food chains and udon shops, provide fun, special tsukimi food menu items. Usually, tsukimi food items are just their regular items with an added egg on top because the yolk resembles a full moon’s shape. And as expected for the land of kawaii, the Japanese will pounce on any excuse to prettify their food with cute bunnies. Consider us moonstruck!

Japanese Tsukimi Around the Word

Throughout September, many Japanese autumn moon-viewing parties fill the evenings. Popular landmarks and destinations like Tokyo Tower, TOKYO SKYTREE, Himeji Castle, and more also have special events to mark the occasion. Participants join their friends to marvel at nature and enjoy seasonal food in Japan. Even if you live far away from Japan, you can certainly take a moment to look up at the moon and appreciate its beauty. Truly, it is a tradition that anyone can take part in around the world.