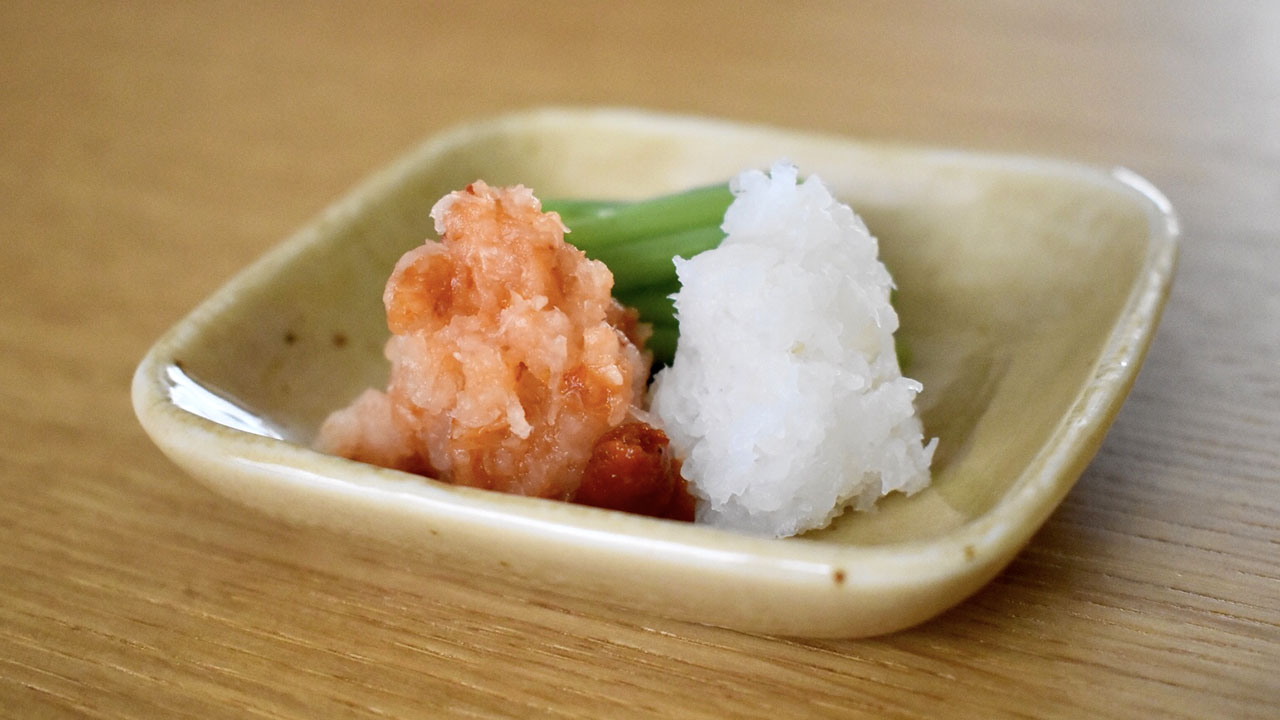 Grated Daikon in a Country of Condiments

If you are familiar with Japanese dishes, you may know that they cannot be considered complete without their accompanying condiments, like grated daikon. And this refers not only to sauces and spices, as many westerners may be used to, but also side dishes that are provided in small amounts and intended to be eaten alongside the meal’s main items. Sushi, for example, is typically accompanied by wasabi and soy sauce. Meals served with plain rice are often also accompanied by Japanese pickled vegetables. And, of course, a great many meals are dutifully served with a side of miso soup. 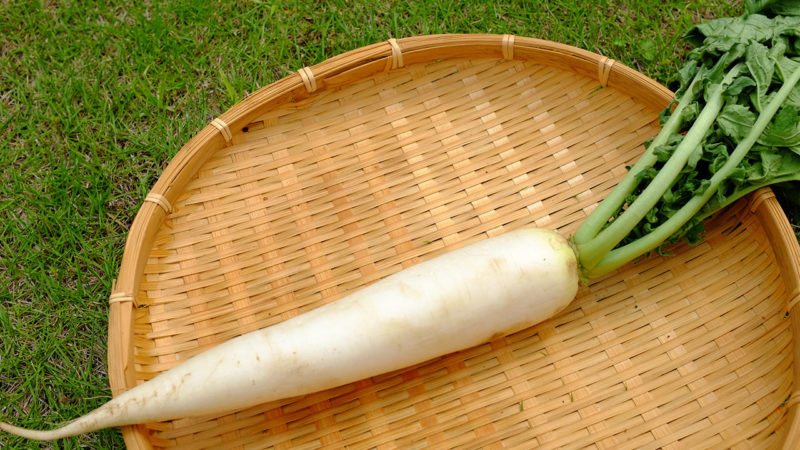 Grated daikon comes alongside many fried foods such as karaage or tempura, as well as soba dishes, grilled fish dishes, nabe, and even less traditional dishes such as hamburger steak. Although it may be more recognizable in its raw form, as seen in groceries and supermarkets, visitors to Japan will quickly learn to recognize the dollop of white slush known as “daikon oroshi”, or grated daikon.

What Is Japanese Grated Daikon?

Originally used only for its light, leafy greens, the long white root of this radish variant became popular in Japanese cuisine as early as the late 1300s and has come to be used in Japanese dishes of all kinds. The use of raw, grated daikon, however, may not have become popular until the Edo Period, which started in the early 1600s. Since that time, however, it has become a staple condiment in Japanese cuisine. It can be grated to varying levels of fineness, affecting the pungency of the flavour. More finely grated daikon tends to be milder and almost sweet in flavour, while more coarsely grated daikon may have a somewhat sharper and spicier flavour (although not nearly as spicy as its horseradish cousin from which wasabi is made). However, it may be grated, as a side dish it is often served topped with a dash of soy or ponzu sauce and then added to bites of whatever main dish it may be accompanying.

Beyond its taste and versatility, raw grated daikon became popular also because it was thought to have the benefit of aiding digestion. Unlike many food myths, however, this particular belief has since been proven true. Raw daikon contains the digestive enzymes amylase, lipase, and protease. These enzymes aid in the breakdown of fats, proteins, and carbohydrates, making daikon an excellent addition to heavy meals. Furthermore, grating the daikon before serving makes it easier for the body to absorb and utilize these enzymes. The benefits are not limited to the digestive enzymes, however. Grated daikon is rich in many vitamins, minerals, and phytonutrients that promote health and well-being. It may very well be one of the contributors to the long lifespans of native Japanese.

A Guide to Eating Grated Daikon 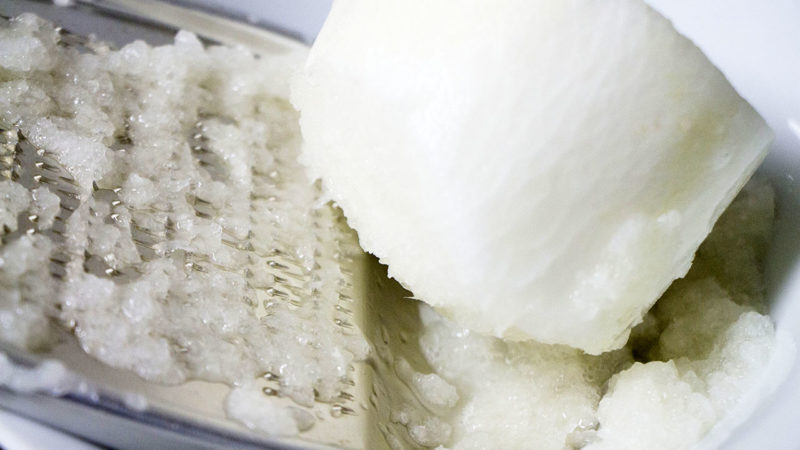 Although it may seem like eating a condiment should be a straightforward task, if you want to partake of your grated daikon like a native, it gets a little more involved than simply dashing the daikon one’s food such as he or she might do with salt or pepper. The specific application of one’s grated daikon depends on the dish with which one is eating it. Here are some of the common ways our Tokyo travelites may see grated daikon applied by the experienced eaters.

For dishes like grilled fish, sashimi, hamburger steaks, Japanese-style steaks, the application of grated daikon is fairly straightforward, if a little time-consuming. One prepares their staple and condiment combination bite by bite, adding a little bit of grated daikon chomp of their protein-and-fat-heavy staple. The cool daikon adds a refreshing little kick to the warm, oily meats. For added flavour, foodies can experiment with topping their condiment with an additional dash of ponzu or soy sauce. Try different combinations with different foods to find your favourite!

For tempura dishes, the general practice is not to apply the grated daikon directly to the tempura staple, but rather to add the condiment to the tempura sauce. The flavour of the daikon compliments the mildly sweet and salty tempura sauce, and when the combination is added to tempura it lightens the oily flavour and brings out the various flavours within.

“Mizore” grated daikon is named for its resemblance to half-melted snow (“mizore” means “sleet” in Japanese). This variation of grated daikon is found in many soup and stew dishes, such as soba, udon, and nabe. It can also be added to some vegetable sauces. This is the most straightforward use of grated daikon, as it is added directly to the dish after serving.

Yummy for the tummy:

Another way of enjoying grated daikon that has become popular in recent years is simply adding it to yogurt with honey. This concoction is said to be beneficial for gut health and regularity.

How to Prepare Grated Daikon At Home 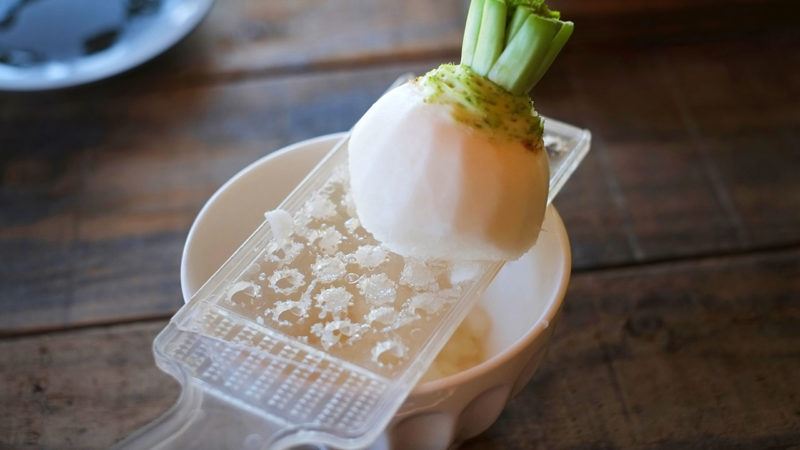 Of course, the most important part of eating any Japanese food is to enjoy it, so foodies are encouraged to experiment with various applications. Don’t be hesitant to enjoy your grated daikon however you please! For those who want to get hands-on with their daikon adventures, it’s an easy and inexpensive food to play with at home. Daikon can be bought at most groceries for a couple hundred yen or less, and a simple hand grater can easily be found at most one-hundred-yen stores. At home, simply grate the daikon to your desired texture and add it to any dish you please. 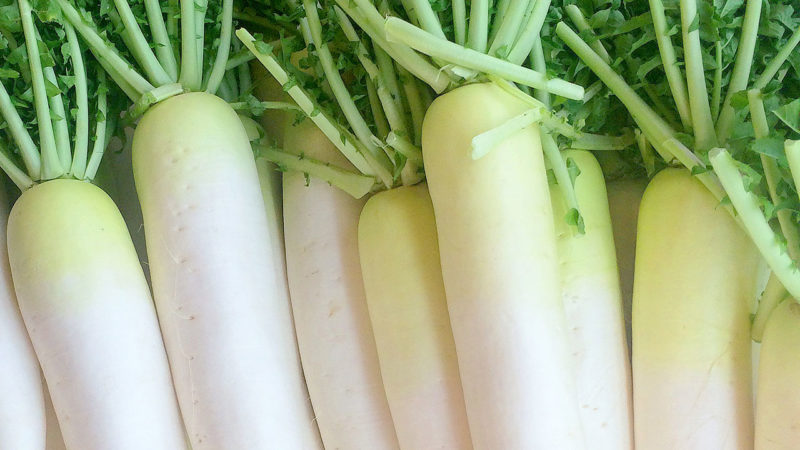 Although the grated daikon has many uses in and of itself, there are many other ways to enjoy Japan’s most popular vegetable. The greens, as well as the root, are filled with vitamins and nutrients, and make an excellent addition to salads or other prepared greens. Furthermore, daikon pickles as well as stewed or simmered daikon (such as that found in Japanese oden) are excellent ways to enjoy this robust and versatile vegetable. Indeed, given its light flavour, grated daikon can be added to any number of dishes and in myriad ways to complement and enhance the main flavours. And however you may enjoy it most, we wish you happy eating!