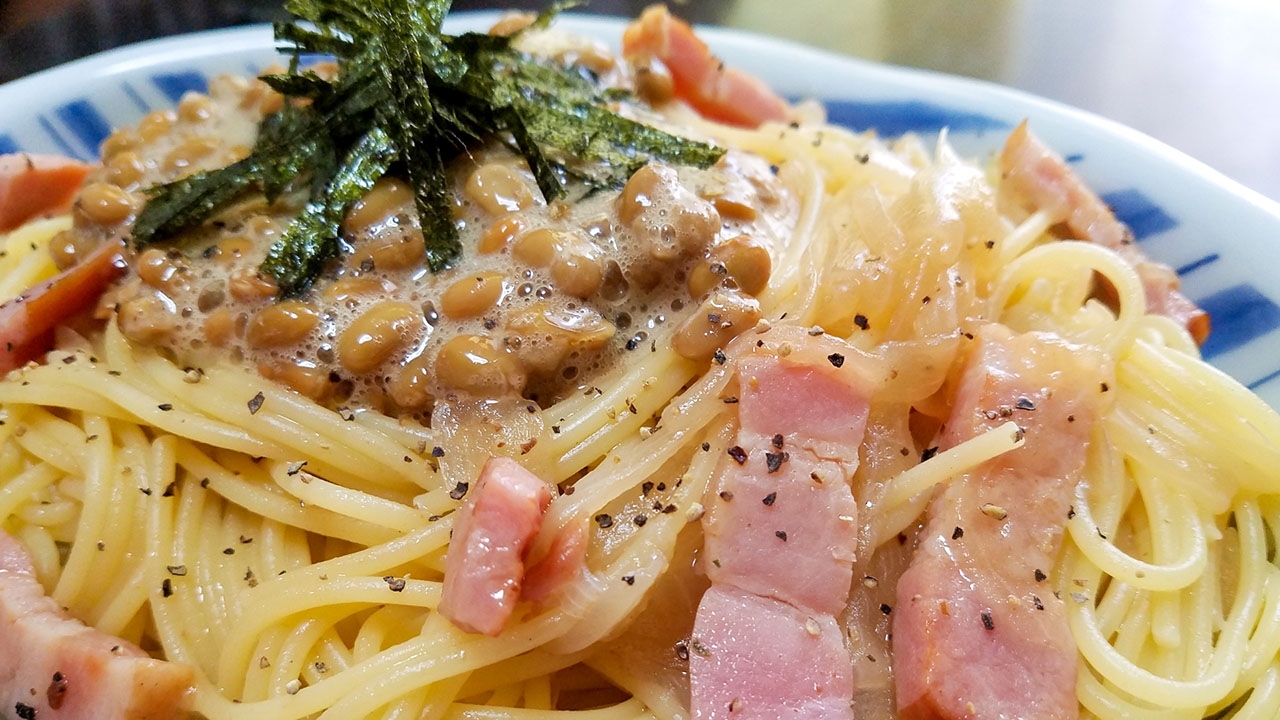 Japanese fermented soybeans, or nattō, remains a popular traditional food that many love across Japan. However, people still wonder how to eat nattō. It’s considered divisive due to its stringy, sticky, and slimy texture. Then, combined with its pungent smell, nattō makes for a dish that’s hard for the unaccustomed to stomach. Like the infamous Dorian fruit or Balut, many let their eyes and nose judge before having a taste. This unfortunately causes them to miss out on the opportunity of enjoying something visually or olfactorily unappealing. In a case like nattō, as with foods around the world you may be unfamiliar with, it’s important to follow in the footsteps of the late Anthony Bourdain and always be willing to try. Upon overcoming initial trepidation, many will find nattō to be an enjoyable addition to their meals. In hopes of making this process easier for the wary eater, I’ll explore the various ways of how to eat nattō so they can enjoy it as the Japanese do.

1. How to Eat Nattō on White Rice 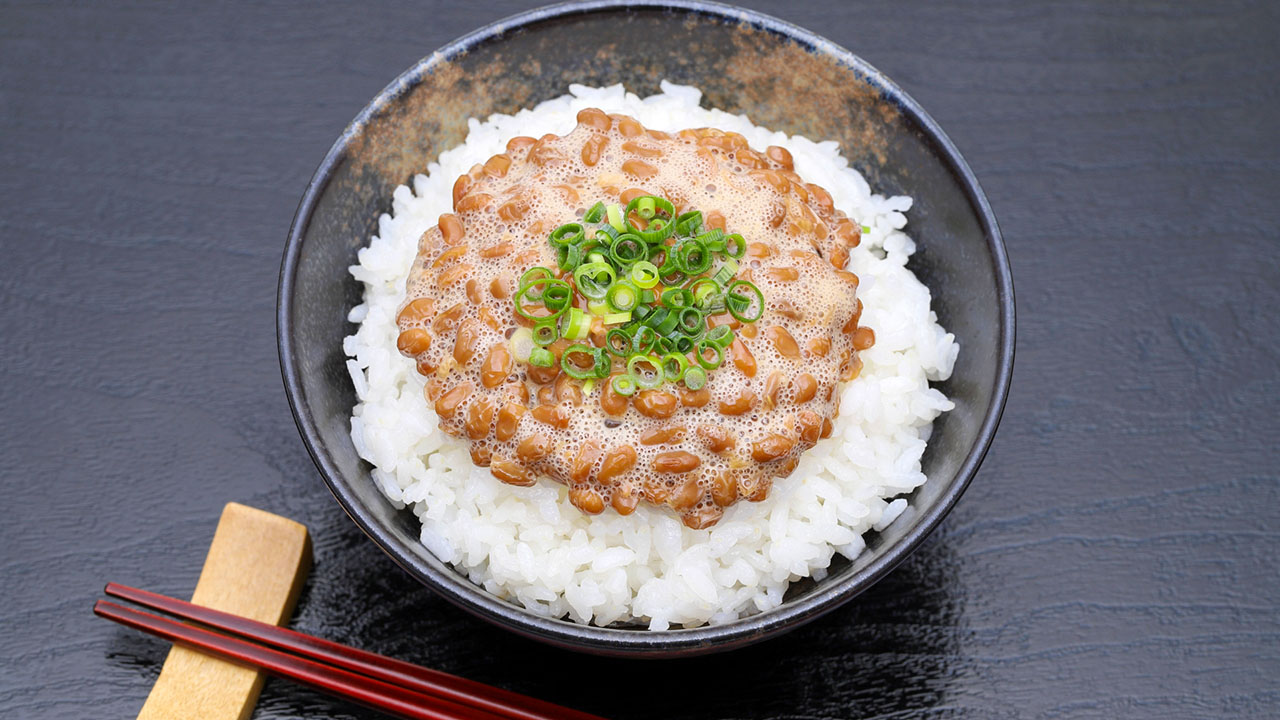 There are various tales surrounding the beginnings of nattō which makes it’s impossible to determine when and how it came into being. However, it’s believed to have entered the mainstream of Japanese cuisine during the Edo period (1603-1868), when it became a breakfast staple. This consists of nattō over a bowl of white rice. Eventually, this became the most traditional method of consuming the dish. The reason this is such a popular method of how to eat nattō is because of its affordability, health benefits, taste, and simplicity.

To begin with, throughout convenience stores and supermarkets in Japan, packets of three to four nattō are sold for as cheap as 100 JPY. This makes them extremely affordable and once you consider their many health benefits, the price is a bargain. Nattō are known as superfoods for their high nutritional value which helps with dieting and stress relief. Furthermore, consistent consumption of nattō can protect the body against strokes and cardiac arrests so not only are you staying healthy, you’re doing so eating something delicious when enjoyed the traditional way over a bowl of white rice. It’s this simplicity of the breakfast staple that makes nattō so popular in Japan. Each packet comes with soy sauce and mustard that is mixed with the nattō for added flavour. Once the mixture has developed a sticky sliminess that is often seen as the cause of people’s reluctance toward the dish, the mixture is put over white rice. Further toppings like negi (spring onion), katsuobushi (dried bonito), nori (dried seaweed) kimchi, or an egg can be added to make for a simple, yet deliciously affordable and healthy breakfast.

2. How to Eat Nattō with Sushi 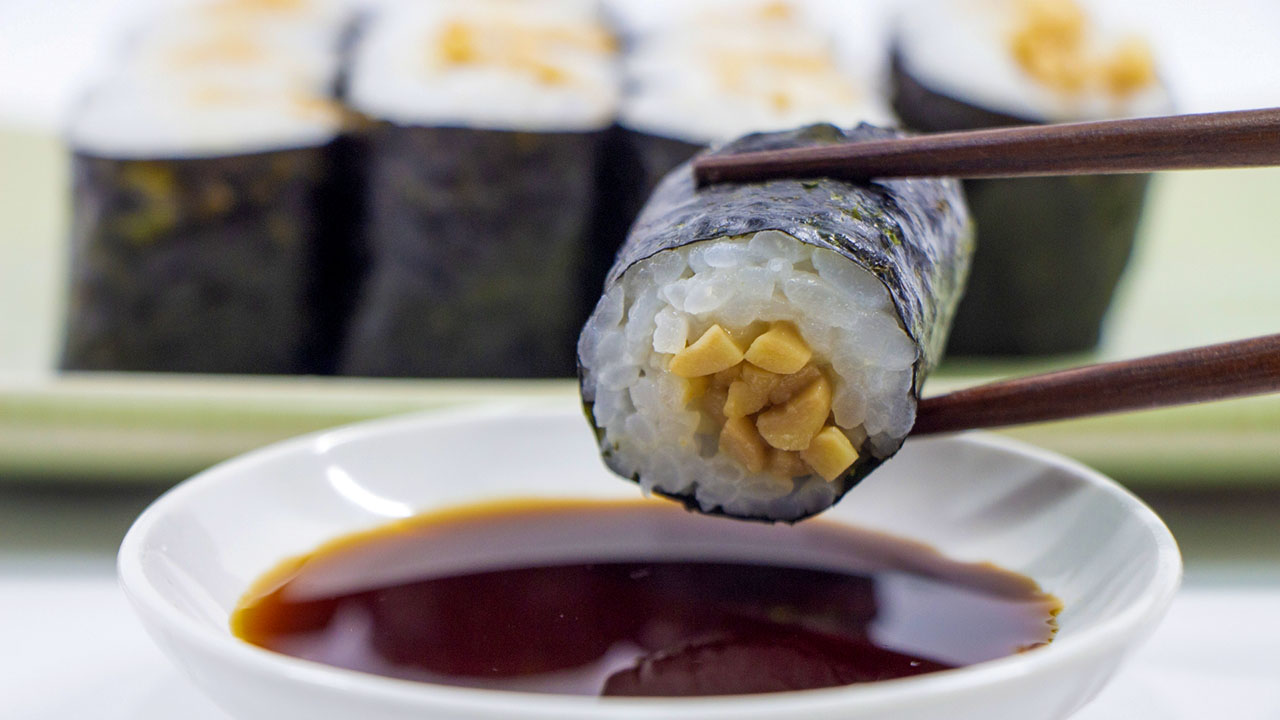 Turning the breakfast method of eating nattō into a compact dish is by making it a maki (roll). Nattōmaki takes the components nattō, rice, and nori, and combines them into a roll which has become a staple at sushi restaurants. Wasabi and soy sauce can be added to enhance the flavours of nattōmaki, or it can be enjoyed on its own. For the wary eater, this may be the best method to try Japanese style nattō. It’s not as daunting as eating it over white rice where you prepare it yourself and the smell and texture is more apparent. Instead, it’s presented as a finished product where the nattō fits nicely within a roll of rice and dried seaweed.

3. How to Eat Nattō with Miso Soup 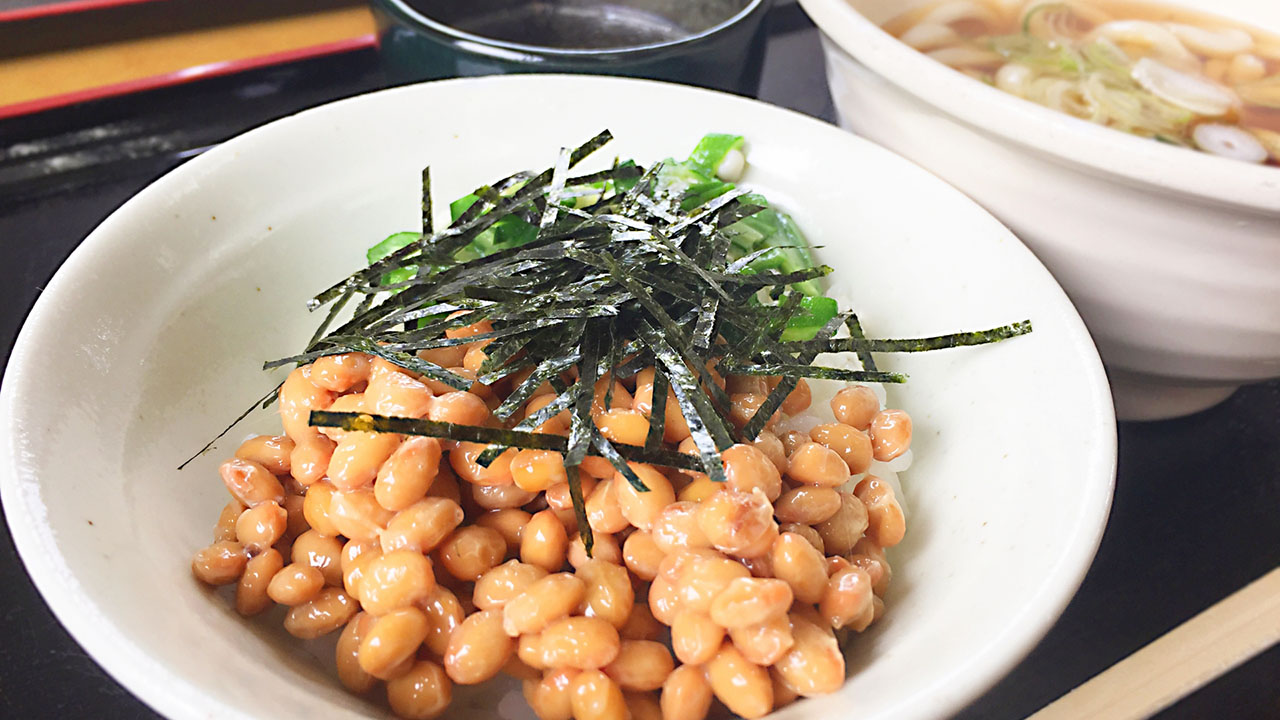 Like nattō, miso soup is considered by many Japanese to be a staple of their cuisine. It’s commonly enjoyed during colder months for its hearty and soul-food like quality. On top of this, it shares many of nattō’s characteristics such as healthiness, affordability, and simplicity. For these reasons, pairing the two seems natural and the result is a dish in which the best elements of each are accentuated. For one, the sticky slimy texture of nattō considered by many to be off-putting disappears in miso soup. Instead, the deep flavours of nattō combine with the umami rich miso soup for a dish that can be enjoyed breakfast, lunch, or dinner.

4. How to Eat Nattō with Pasta 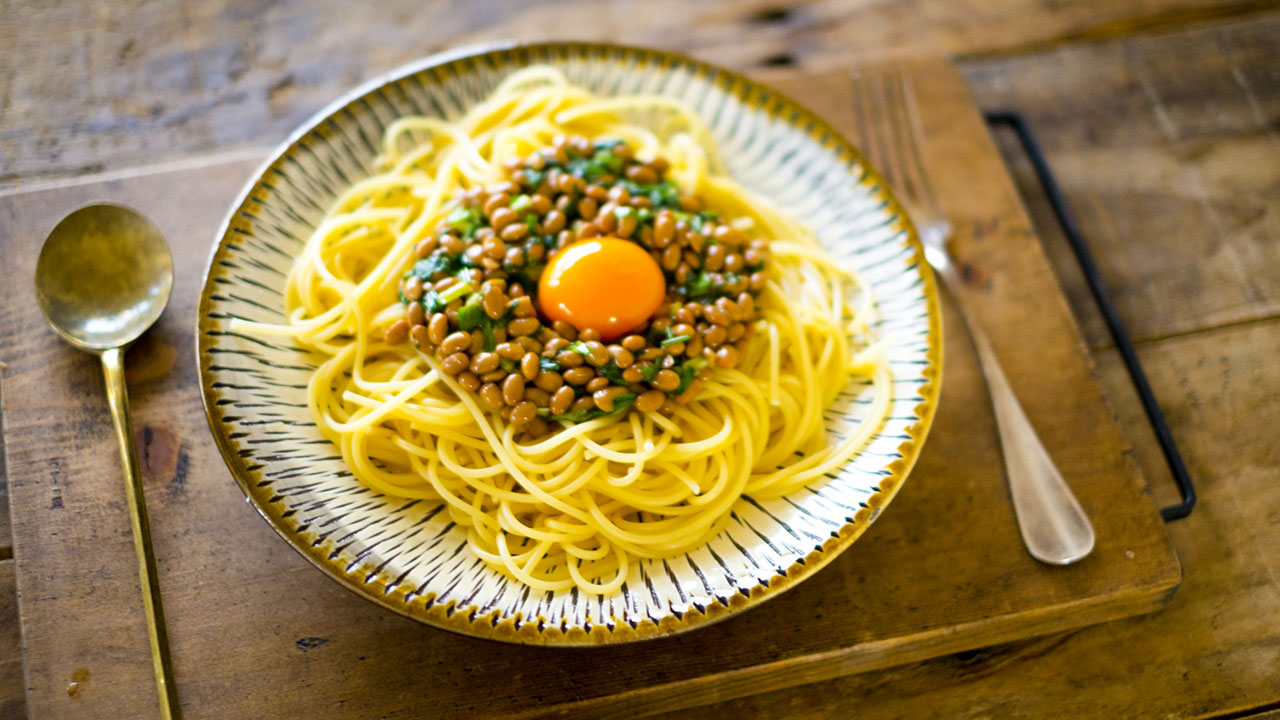 Eating nattō with pasta has become increasingly popular. In fact, many variations on the dish include either a Japanese version, or a Western one. The common denominator is the nattō and pasta, usually a long noodle type like spaghetti. From that, the ingredients vary. Japanese nattō pasta is characterized by its lighter flavour profile which utilizes dashi (stock) and tsuyu (soup base) for a deep but delicate taste. The pasta is cooked according to packet instructions and then added to a pan where it’s tossed with dashi or tsuyu and ingredients like spring onion, canned tuna, nori, soy sauce, and sesame oil. On the other hand, Western nattō pasta is saucier and heavier, with qualities that liken it to what comes out of Italy. One of the most definitive characteristics is the addition of cheese. Upon first consideration, nattō and cheese may seem like stark opposites unfit for pairing. However, the two combine surprisingly well as once the cheese melts and fuses with the nattō, the sticky slimy texture develops a delicious creaminess. This allows for dishes like Carbonara style nattō pasta. After cooking bacon in a pan, add the pasta as well as egg yolk, parmesan cheese, soy sauce, pepper, and nattō, and stir until combined.

5. How to Eat Nattō on Toast

Nattō toast is a fusion recipe with the east being the nattō and the west, the toast. It’s eaten for breakfast and can replace the traditional and most common method of eating nattō, which is over rice. The simplest way to enjoy this dish is by opening a packet of nattō and mixing it as you normally would with the provided condiments. The mixture can then be put atop a slice of bread and toasted. The texture of the nattō isn’t as noticeable once its toasted and combined with the crunch of bread, makes for a simple and filling meal. To upgrade this version, different toppings can be added like cheese for a nattō cheese toast, tuna mayonnaise for a nattō tuna mayo toast, or avocado for a more modern nattō avocado toast. The variations are endless and dependent upon personal preference. 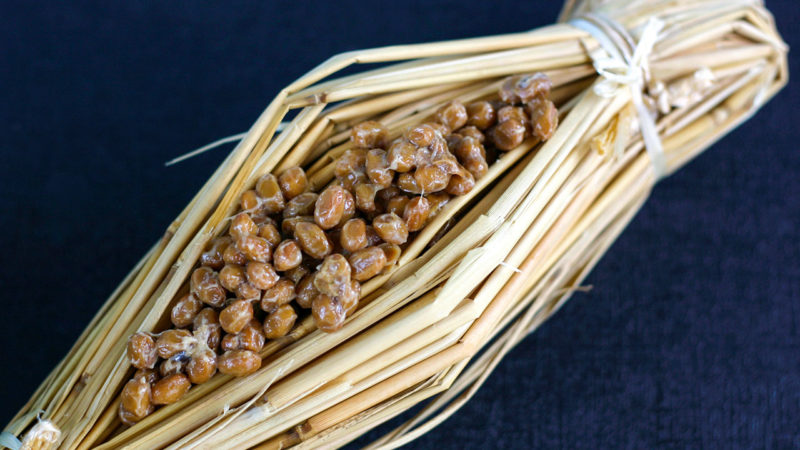 These are five examples of how to eat nattō. If you’re someone who’s never tried it before and is reluctant to, easing your way in with nattōmaki or a nattō pasta may be the right option for you. On the other hand, if you’re a fanatic whose daily breakfasts are nattō over rice, why not experiment with nattō on toast? You may just find you enjoy it more.