Michael Feather: Photographer
A graduate of Leeds College of Photography Design and Print

Clients varying from Lucite International and Muji to some of the best award winning agencies in the UK and Japan . Shot the cover picture for Peter Mayle’s book, “A Year in Provence”.
2008: opened an office in Tokyo.
2012: received Tokyo ADC Award for MUJI Campground as a photographer.
2013: TOKYO APA Award (Advertising Photographers Award) for MUJI Campground.

Michael Feather cannot talk about the Sanja matsuri without smiling. He captured timeless photos, but also forged strong bonds with the people from the Senwa (Asakusa Senwa Chokai) neighborhood association who are participating in the Sanja festival. “There are two types of photographers,” he says to me on Skype, “and I am the type that likes to get to know his subjects”. 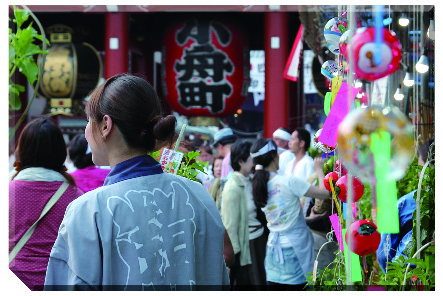 A professional photographer working in Tokyo, he also worked on his passion photo projects and that is how he met a person from the Senwa association who invited him to take photos at the Sanja matsuri. He knew right away that it was a great opportunity to experience this festival from the inside and took them up on the offer.

From outsider to insider – 3 years with Senwa Chokai

Michael remembers the first time he was introduced to the Senwa association members in 2012 – everybody was perfectly polite, but everybody had tasks and preparations to do. With time, from spending his breaks alone in a cafe, he ended up being invited in all of their homes and becoming close friends. He spent his first Sanja matsuri photographing the hustle and bustle flooding the Asakusa alleys, sometimes even having to be there at 4 am so as not to miss a thing! Originally supposed to be a one-time thing, he eventually spent three years in a row documenting the Sanja matsuri.

The second year he came back to take portraits of the people in the association. Inspired by August Sander, who photographed people in a uniform in a certain work role, and having become closer to the Senwa chokai people, he decided to do the portraits while the festival was ongoing. “Anything else would have been less real,” he says and goes on to explain how he managed to briefly draw in his subjects during their busiest time. He built a makeshift studio in one of the garages they use for storage. The people of the Senwa were moved by his dedication to the point of chasing potential portrait subjects down the block so that Michael can photograph them!

The third year, 2014, he came back to capture Sanja matsuri yet again, but this time its sounds. He had an upcoming exhibition of the Sanja matsuri photos in Paris and he wanted to accompany that with the sounds of the festivities, bringing viewers closer to experiencing Sanja matsuri.

Understanding the spirit of summer festivals

Michael had been to other summer festivals before, but Sanja matsuri was different. Being warmly accepted by the local community, he decided to wear full matsuri garb, from the hanten coat to the jikatabi socks that he smilingly admits dilapidated fast from the wear and tear. During the matsuri, one of his dearest memories is being handed a special purple hanten, the one worn by the ushers, so that it would protect him among the crowds in Sanja shrine. He also received another hanten, a rare official one that he treasures to this day.

He also joined shoulders with the others to carry the mikoshi portable shrine of Senwa. While certainly heavy, everyone helps and shares the load, strengthening the sense of community. Michael was amazed to meet at least three generations living constantly in the Asakusa area and taking part in Sanja matsuri. He is more used to people moving from place to place and cities in a constant flux. However, he understood that matsuri festivals have their roots firmly in the past, while still accepting modernity.

Michael advises visitors to be respectful, but also enjoy the festival. It is a supposed to be a fun event, so follow the locals and do what they do! He says learning a bit of Japanese can take you a long way and a smile does wonders. Wearing a yukata is recommended as it will put you in a matsuri mood. And if you want to take photos, go for it and remember that any camera is a good camera to capture memories.