‘Tis the Season for Matsuri

If you know Japan, you know it breathes with the rhythm of the seasons. The main four seasons were actually 24 seasons in the past and some people divide that further into 72 microseasons of nature. The days get warmer and warmer, but it’s not truly summer until you hear the drums of the matsuri. Summer festivals mean wearing a yukata, light traditional dress similar to kimono, eating street food, dancing and mikoshi processions among many other things. They are among the kigo or seasonal keywords in haiku with the task to immediately paint an image of summer in the reader’s mind.

in a cloudburst
another festival shrine
passes by 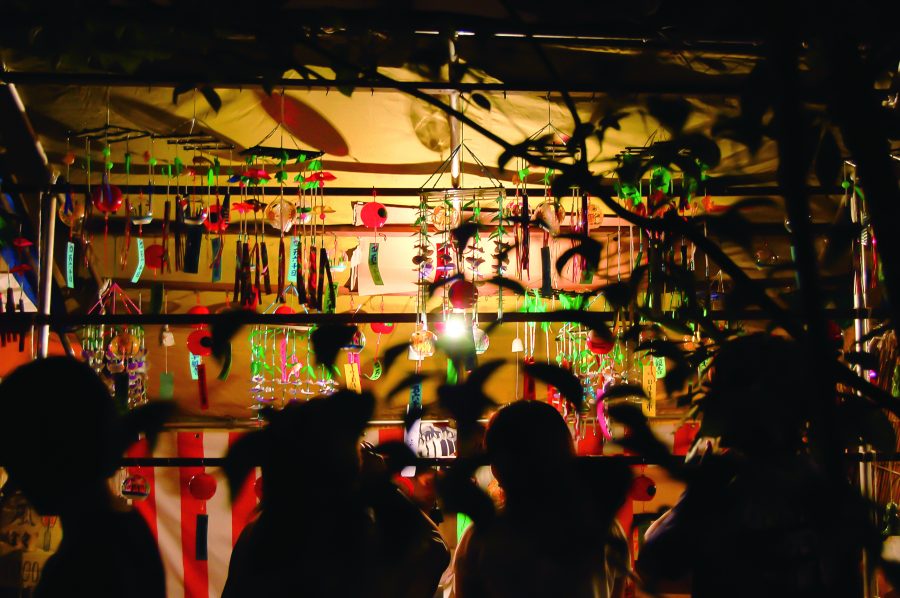 The matsuri is a fun and enjoyable celebration centered around the carrying of portable shrines, or mikoshi, which is a Shinto religious practice. It is believed that on that occasion the God’s soul is taken from the local shrine and carried around the area in the mikoshi, which is why it always closely resembles the shrine itself. It is believed that the God blesses the streets while also being amused by the ride in the mikoshi. There are matsuri events throughout the year; traditionally in spring people prayed for a good harvest, in autumn they gave thanks for a bountiful harvest and so on. There are many occasions to appease the Gods, however, by far, the biggest number of festivals are summer festivals. They are also the most fun, perhaps because summer has always been a time of good weather and plenty of food.

A matsuri is a duality – a solemn religious occasion and at the same time, a joyful rowdy celebration. Through the years, the religious element of matsuri became less pronounced and today there are even secular summer festivals that retain the same atmosphere, just without the mikoshi. The one thing in common of all these festivities is enjoying summer and engaging with your local community. As people living in urban areas today socialize less and less, matsuri in Tokyo is one of the rare opportunities to interact with the locals.

Kanda festival, Sanja festival, Fukagawa festival and Sanno Festival are the biggest and most popular summer festivals in Tokyo since the Edo period. Actually, Kanda and Sanno festivals were the only ones patronized by the Edo Bakufu in the Edo period. Kanda festival and Sanja festival open the matsuri season in mid-May and Sanno festival follows them in the middle of June. All of them have a spectacular procession of mikoshi and people dressed in traditional clothes, historical costumes, dancers and so on.

Next, at the end of June and beginning of July come the Ofujisan festivals and as the name suggests, they are worshiping Mount Fuji. These festivals in Tokyo can be found in Asakusa in Sengen-jinja and Kita-ku Jujo in Fuji-jinja and more. Although they are not physically close to Mount Fuji, Edo people have always admired the sacred mountain from afar and built shrines to pray to its spirit.

The first half of July is the time for two summer festivals ending with ‘ichi’ which comes from the Japanese word “ichiba” and means bazaar. Hozuki-ichi and Asagao-ichi are held in Senso-ji and Shingen-ji respectively. They are both dedicated to flowers; hozuki is translated sometimes as “ground cherry” or “Chinese lantern” and asagao is morning glory. Fun fact: a prayer in Senso-ji during Hozuki-ichi is believed to be worth the same as 46.000 prayers!

Another symbol of summer in Japan are the various hanabi or firework festivals. In Tokyo, the most spectacular Sumidagawa Hanabi Festival takes place on the last Saturday of July and it has been held since the 18th century. It is a marvelous display of fireworks sharing the sky with the Tokyo Skytree while the visitors lay down mats on the streets and have nighttime picnics.

Learn more about fireworks from our The Matsuri Manual : 8 types of fireworks you need to know

One of the later summer festivals is the Fukagawa matsuri in Tomioka Hachimangu shrine taking place in the middle of August. Although it is celebrated every year, every third year the celebrations are more spectacular than usual. The last such festivity was in 2017 and the next one will be in 2020!