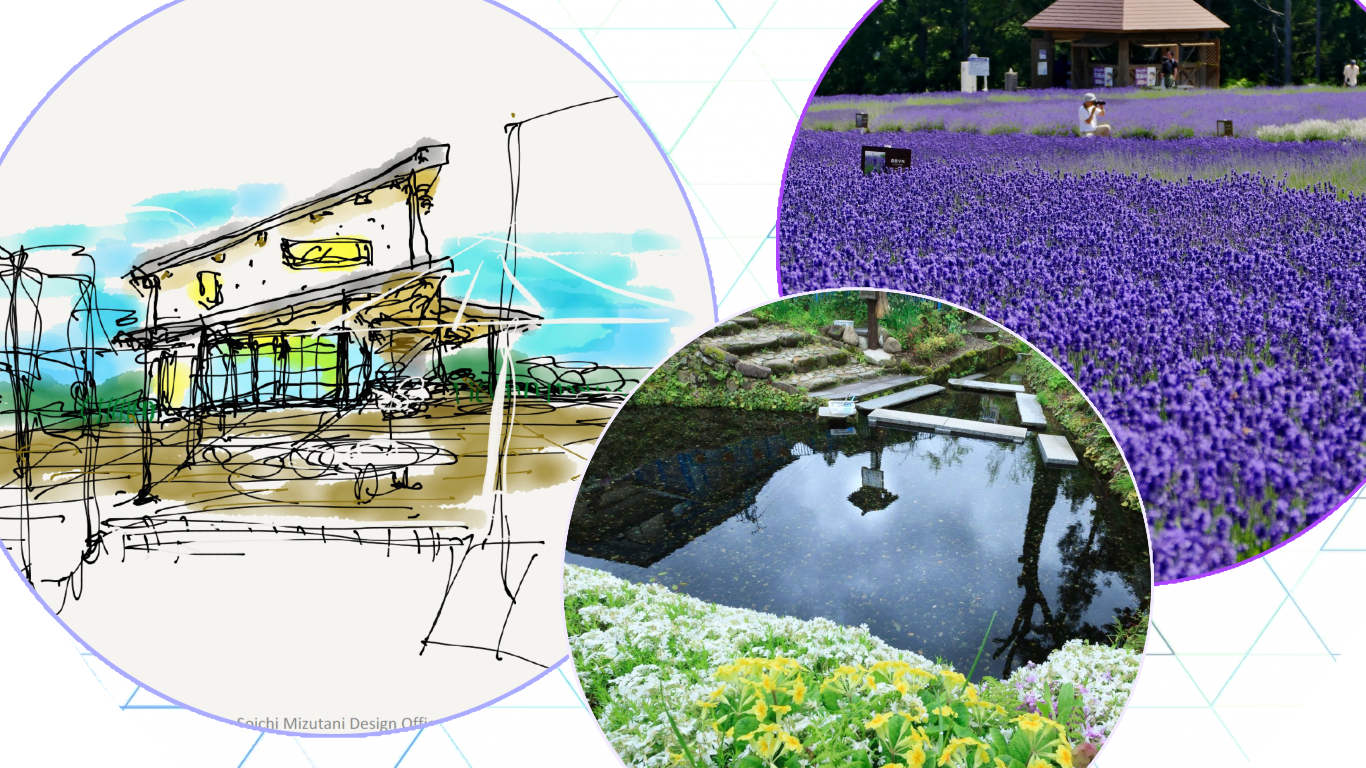 When the coronavirus subsides and tourist activities resume in Japan, there is a good chance that popular tourism destinations will extend from big cities to the countryside. This is why WAttention, a company that has a deep relationship with Akita, has decided to create a guest house in the prefecture’s spring water town, Misato. The facility, which is slated for completion this autumn, aims to welcome tourists from all over the world to experience the endless charms of the Japanese countryside. 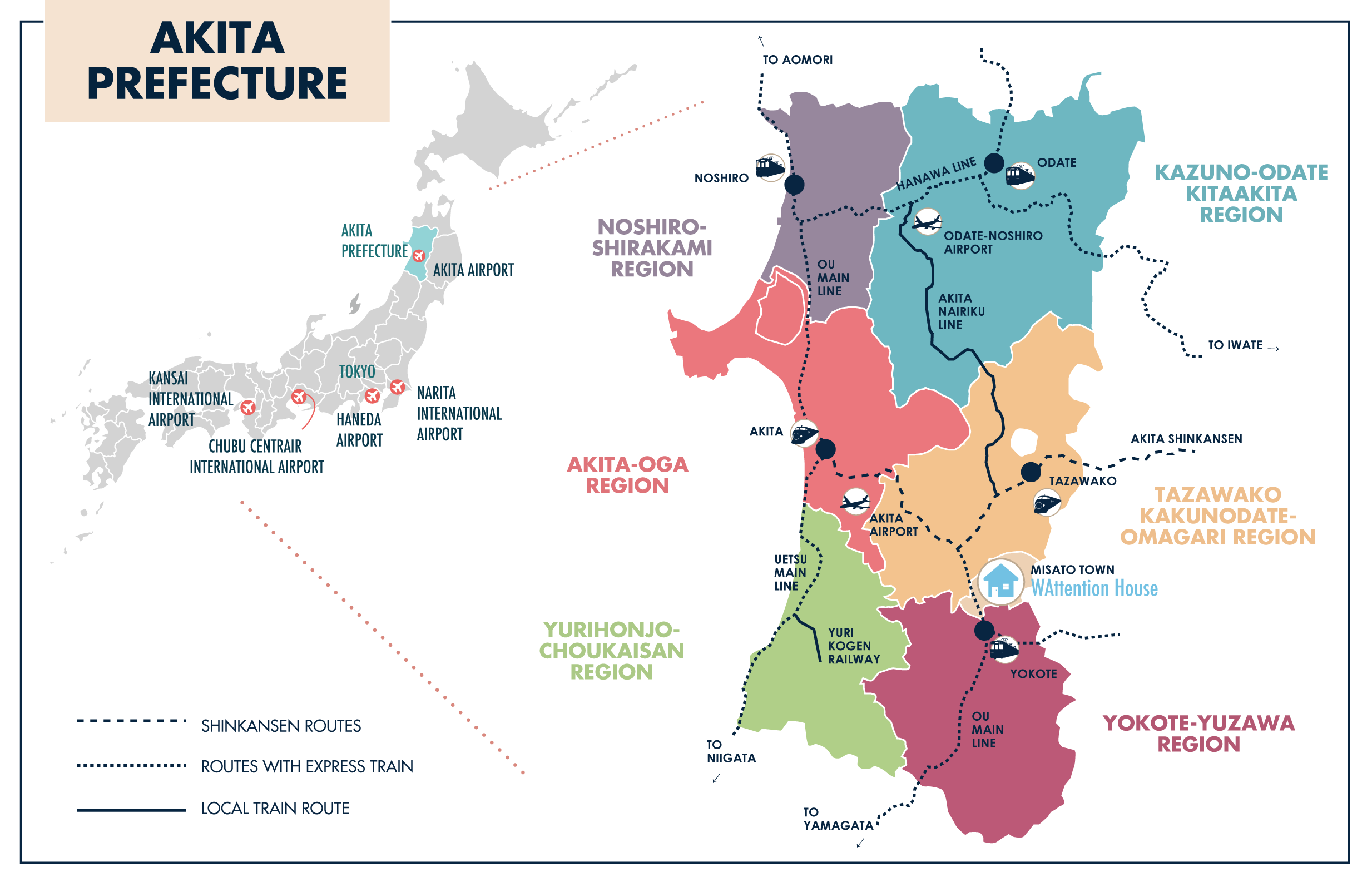 Located in the Tohoku region of Japan, Akita Prefecture is approximately 3 hours and 37 minutes away from Tokyo by the Shinkansen. The flight from Tokyo’s Haneda Airport to Akita Airport or Odate-Noshiro Airport only takes about 1 hour and 5 to 10 minutes.

Those who have visited Tokyo are sure to remember the iconic dog statue in front of the JR Shibuya Station. The story of Hachiko, the canine that waited faithfully for his deceased owner to come home, is so famous that it was adapted into a Hollywood movie called Hachi: A Dog’s Tale, starring Richard Gere. And guess what, the dog’s lineage is from Akita!

Akita dog, a native Japanese breed, was designated as a Japanese Natural Treasure in 1931. Although they were originally trained to hunt down wild animals, they are also very obedient, loyal and cute. The puppy is characterized by a pair of erect triangular ears, a curled tail and a fuzzy coat colored in yellowish-brown, white or brindle. Among the famous Akita dog owners are Helen Keller, a deafblind US activist credited for bringing the first Akita dog to the United States, and Olympic figure skating champion Alina Zagitova.

For a close-up encounter with Akita dogs, we suggest that you visit Odate’s Akita Dog Visitor Center, Akita Dog Museum, or Furusawa Onsen.

Akita Prefecture is known for its gorgeous scenery and cultural diversity

Akita Prefecture is also home to the unique tradition of Namahage. On the New Year’s Eve in the Oga Peninsula, villagers would dress up in straw garments and frightening masks and roam around homes screaming things like “where are the crying children?” and “where are the lazy kids?” This is a way of telling children to get their act together and behave. For those interested in knowing more in person, the Namahage Sedo Festival is held on the second Friday, Saturday and Sunday in February each year.

Travelers with a penchant for nature will be amazed by the unspoiled natural landscape Akita has to offer. Lake Towada is a beautiful lake that straddles between Aomori Prefecture and Akita Prefecture. Formed around 200,000 years ago following volcanic activities, the caldera lake measures 327 meters at its deepest and is crowned Japan’s third deepest lake (Akita’s Lake Tazawa is Japan’s deepest lake at 423.4 meters). Oirase Stream, which flows from Lake Towada at Nenokuchi and runs 14 kilometers down to Yakeyama, is a well-known scenic spot. Although the river itself is not within the precinct of Akita Prefecture, you still can visit Akita’s side of the Lake Towada for unrivaled natural beauty.

Shirakami Sanchi, an expansive 130,000-hectare mountainous area that extends from northwestern Akita Prefecture to southwestern Aomori Prefecture, was recognized by UNESCO as a world heritage site in December 1993. It is home to the world’s largest primeval beech forest. Hikers and nature lovers can apply for a permit to enter the area or else take the Resort Shirakami train which runs on the Gono Line, to enjoy this magnificent sight.

Mount Chokai is a 2,236-meter high mountain located on the border of Yamagata Prefecture and Akita Prefecture and it is often referred to as Dewa Fuji. The peak, a sacred mountain protecting the locals since a long time ago, is now a popular attraction among trekkers for its seasonal natural beauty. Meanwhile, Mt. Kurikoma is a cone-shaped volcano spanning across the borders of the prefectures of Miyagi, Iwate and Akita. Known as the Queen of the Ou Mountains, it is praised as one of the hundred mountains of flowers because some 150 species of alpine plants grow in clusters there. Be it the stunning foliage, primeval beech forests or hot spring resorts, Akita’s peaks have something for every hikers.

Scheduled for opening this fall, WAttention House is located in Misato Town’s Rokugo, a place listed on Japan’s top one hundred best waters ranking. It owns its rich underwater resources to Maruko River, whose frequent flooding has caused the formation of an alluvial fan. It is said that Rokugo got its name from the Ainu word rukokottsui, which means a pond of clear water. As most locals have water pumps in their home to retrieve water from underground for daily use, the area does not have widespread tap water supply facilities.

There are about 60 big and small spring water sources in Rokugo. Follow the local guide map to spot a source near you. You can even enjoy a refreshing meal at Meisui-an’s kura café at Niteko Shimizu. Rokugo is definitely a must-visit for those looking for tranquility and relaxation in Japan’s countryside.

Based in Misato Town’s Rokugo area, WAttention House will serve as a multi-purpose facility to advertise the cultural charms of Akita Prefecture and Japan to tourists home and abroad. The blueprints will be planned by architect and designer Soichi Mizutani whose signature works include Hermès Japan store and the Paris residence of renowned fashion designer Kenzo Takada. Surely, a simple-yet-sophisticated-borne design awaits WAttention House to have an intrinsic appeal.

Upon completion, WAttention House will not only provide accommodation service, but hold various events and provide premium products made in Akita, offering tourists a one-of-a-kind travel experience. Stay tuned for more information!

Rokugo-no-Kamakura is held around mid-February every year. Highlight events include the writing of New Year wishes, snow dome making, a bamboo fight whose outcome will decide whether there will be a good harvest, and, sagicho, the tradition of burning the first calligraphy of the year. The bamboo fight is considered the most dangerous and bizarre event because two teams fight with each other using only tall bamboo sticks.

Kamakura festival has many variations in Akita Prefecture—such as the Hiburi Kamakura Festival in Kakunodate and the Yokote Kamakura Matsuri—making winter a fantastic season to visit and explore.