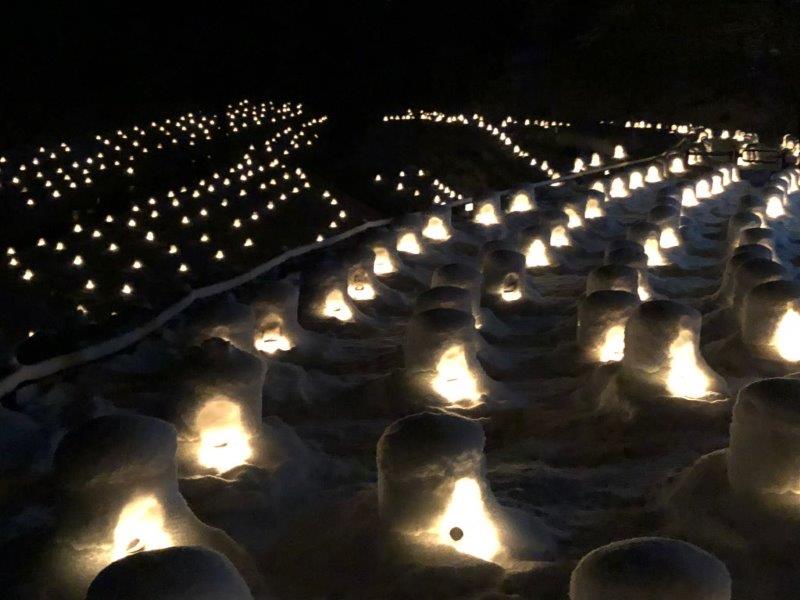 Toshogu Shrine and Lake Chuzenji are two of the most well-known attractions in Nikko. But do you know that Yunishigawa is also an attraction with historical significance? You don’t have to travel all the way to the Tohoku region to experience Japan’s unique snow house culture. Yunishigawa Kama-kura Festival, or Yunishigawa Snow House Festival, takes place from January to early March every year and around 800 snow houses are lit up at night, creating a magnificent sight to enjoy. If you’re in Tokyo, just hop on the Tobu Railway’s limited express Revaty and you’ll be in this winter wonderland in no time.

Situated in Tochigi Prefecture’s Nikko City, Yunishigawa Onsen is a hot spring town overflowing with incredible nature in every season. As its waters are said to have therapeutic and healing qualities, Yunishigawa Onsen has gained fame among hot spring lovers as a getaway paradise. Winter is the most dazzling time of the year to visit, with 800 snow houses being illuminated at night. To see this amazing sight, we took the Tobu Railway’s limited express Revaty from Asakusa Station and headed straight for Yunishigawa.

Revaty runs on different routes so make sure that you take the one bound for Yunishigawa Onsen. We took the direct train, which saved us both the time and hassle of transferring between trains. For those who want to spend more energy on sightseeing in Yunishigawa, we strongly suggest that you follow our example. Here’s another tip for you to take away: you can skip the line by reserving your ticket online and pick it up at the station of departure. In addition to providing sightseeing information, the TOBU Tourist Information Center on the ground floor of Asakusa Station also sells train tickets. There are Chinese and English speaking staff to help you.

We left Tokyo on a 9 am direct train for Yunishigawa and managed to relax in our spacious, com-fortable seats as the gorgeous Tokyo Skytree zipped by outside the window. Revaty seats are all col-ored in “Edo purple” and inspired by inden, a traditional Japanese craft that uses deerskin to make everyday objects. All the seats have electrical power outlets and free WiFi is available throughout the train. Japanese hospitality is the best there is!

After departing from Tobu Asakusa Station, the train separates into two parts at Shimo-imaichi Sta-tion, with the first three cars moving to Aizu-tajima and the rear part going toward Nikko. Therefore, it’s especially important to ensure you’re in the right seat. As the train rushes on, the scenery outside the window changes from lush green to a white carpet of snow. After two and a half hours, we final-ly reached Yunishigawa Onsen Station. Next to the station is the Yunishigawa Tourism Center “Yunosato,” where we took the Nikko Kotsu bus to our hotel for the night.

Founded in 1573, Yunishigawa Onsen boasts a history of more than 400 years. Lined with traditional houses, the main street is full of nostalgic touches. It’s as if time has stopped right here! The town’s location deep in the mountains has contributed to the well-preserved streetscape. The legend of the Taira clan also has to do with its seclusion from the outside world.
The Taira clan was a major Japanese clan of people in the Heian period (794-1185). After suffering a defeat from the Minamoto clan in the 12th century, the samurais and retainers of the Taira clan fled to remote regions all over Japan. Yunishigawa was one of the settlements. To keep their hideout a secret, they changed their names and lived a low profile life. Years later, the hot spring was discovered and the town became a secret onsen spot.
In the past, visitors come either for a dip in the onsen or to learn about the Taira clan. But the most attractive thing about this town right now is the Yunishigawa Kamakura Festival. Twenty-five years ago, hotels and restaurants came together and put up a snow house festival inspired by the snow house culture in the Tohoku region. The festival has developed its own character over the years and is now the biggest winter event in Tochigi Prefecture.

We are among the hundreds and thousands of tourists who come to Yunishigawa every year to take part in the snow house festival despite the cold, winter weather. After arriving at noon, we took a walk around town to get our bearings before the illumination at five in the afternoon. The main street was lined with stores and as crowded as it could get. Quite a few stores played with their creativity by giving personal touches to snowmen or snow houses in front of the stores. Take a look at the drunk snowman in front of the Japanese sake store and the little snow dog in front of the post of-fice—how adorable!

Be wowed by the amount of creativity that must have gone into making all these snow characters.
1 of 5

Later, we went to see the snow houses, which were scattered into five different venues. One of the venues, “Sawaguchi Riverbed Miniature Houses,” is regarded Japan’s best night scenes, with 800 candle-lit snow houses lining both sides of a river. I was curious to see how this romantic scenery is created so we got there before nightfall. Since the snow fell relentlessly, the locals had to keep dig-ging and adding some last minute touches to the snow houses. Despite flurries of snow, we stood by just to witness the making of a dreamy wonderland. After shaping the snow houses, the locals slid paper cups with lit candles inside the holes, slowly lighting up the riverside. We were impressed by the time it takes and the amount of preparation needed to create the romantic atmosphere of Yunishi-gawa Onsen.

Nightfall signals the beginning of the long-awaited illumination. Miniature snow houses that dot the riverside light up in the cold, wintry wind, creating a magnificent sight in darkness. Although the temperature dropped to below 0 degrees Celsius that day and snow was falling from the sky, there were more tourists in Yunishigawa at night than during day time. Everyone had either a camera or smartphone in their hand to capture this mesmerizing view.
We were so amazed by the sight and impressed by the local’s effort to make this happen that we al-most missed the bus back to the hotel. The locals told us that since there are only about 1,000 people living in Yunishigawa Onsen, everyone—including elementary and middle school students—must pitch in and work around shifts to make snow houses.

We headed to the main venue “Heike-no-Sato” shortly after. “Heike-no-Sato” is an open-air museum consisting of ten traditional houses that display the history and tools used by villagers in the past. During the festival period, snow houses of different sizes are showcased and lit up in mystic blue at night. The sight is quite different from the 800 miniature snow houses but equally, if not more, charming. Walking paths are also lit up in different colors, resembling a galaxy in the dark universe.
The ambience at night is totally different from daytime and really worth a visit. We suggest that you stay for one night to get the most out of the trip. Ask your hotel if there’s a free shuttle service to take you to and fro to avoid the transportation hassle.

How do Yunishigawa people make a snow house?

When it comes to snow houses, Japanese often think of the Tohoku region. Therefore, when the peo-ple of Yunishigawa Onsen decided to hold their first snow house festival, they also looked into the ways snow houses are made in Tohoku before coming up with their own solution. According to the locals, to make a snow house the size of a room, you have to first build a supporting frame using wooden boards. After that, excavators and bulldozers are needed to make thick snow walls and a sound roof. Two days are required to complete the whole process. A miniature snow house is much, much easier to make. Just follow the following steps to make one!

Besides appreciating the beauty of snow houses, you shouldn’t miss out on the chance to learn about the Taira clan culture. During the festival period, visitors can learn how to draw a Taira clan emblem, enjoy musical performances of traditional instruments and participate in story-telling activities at “Heike-no-Sato”. You can also try on a traditional Japanese raincoat made out of straws. These rain-proof, cold resistant capes, along with straw shoes, made walking in the snow a piece of cake for people in the past!

Winter outdoor activities are also available at Yunishigawa. The locals made use of large accumulation of snow and built a mound for kids snow sledding. This “artificial” ski resort is next to the “Mizu-no-Sato” Tourist Information Center and only open during the festival season. We saw many children sliding away with smiles! Too bad adults are not aren’t allowed inside.

Stay for One Night to Enjoy Local Cuisine and Hot Spring

The hotel we stayed at is called Hana-to-Hana Hotel. Designed with a modern, simplistic touch, this Japanese style hotel is well known for its outdoor onsen, which boasts a panoramic view of mountain cliffs covered in white snow. Yunishigawa Onsen was voted the top hot spring for beautiful skin in 2016. Its alkaline waters are said to be the secret to silky, smooth skin and can help tourists shake off the stress of long distance traveling.
On the night of our stay, we tasted “Heike Karibayaki,” a local dish that originated from the Taira clan samurais. During the days of exile, they would cook the animals they hunted in the mountains on a stick with miso sauce. We sat around an irori, a traditional Japanese sunken hearth, and had Japanese food while waiting for the meat to be ready.

After seeing all those snow houses, we wanted to experience the fun of dining in one so much that we made a reservation with the hotel to do just that. Inside the igloo, the kotasu, a Japanese table with a heater under it and a blanket that goes over the table, warmed us up immediately. We enjoyed hot red beans soup and some fresh fruits while appreciating the garden night view. Talk about luxury and comfort!

What makes a journey worth the effort is great attractions and extraordinary food. This time, we had the chance to taste “Heike Karibayaki” and many other local treats like steam buns made with lemon milk and strawberry milk. We ran into these cute little guys in Yuzawaya, a wine shop located on the main street, and had to get some to go with hot coffee and amazake, a traditional Japanese drink made from fermented rice. Hot food is a delight on cold wintry days!

Aizuya is a tofu specialty store located at the river bank close by Jikoji Temple. One of its best sellers is a type of dried tofu that goes by the name “cheese from deep in the mountains.” It comes in two flavors: miso and soy sauce. We ordered a simple tofu hot pot to go with the dish and were more than satisfied with the taste, hospitality and price.

A day in Sumida： Following in the inspiration of Hokusai