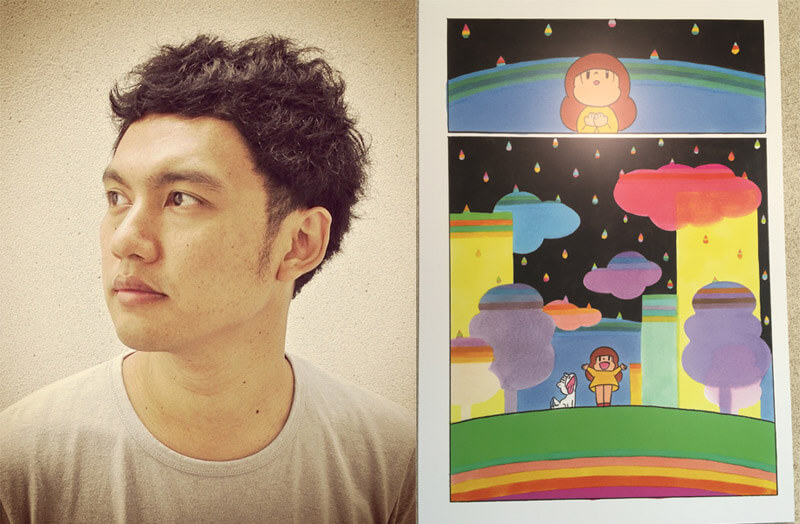 To the north of Tokyo lies Saitama City. It’s not so well known amongst tourists but there are many fun activities and green areas. It’s a fun place for a daytrip. Currently Saitama is hosting the 2016 Saitama Triennale of which one exhibition area is in Saitama City.

The Saitama Triennale 2016 has participating artists from all around the world, famous in their own country and abroad. The Saitama Triennale has become a festival to be enjoyed by all five senses. This year’s theme is “Discover the Future!”. Discover Saitama’s charm and daily life through the art’s stories. There’s an indoor and an outdoor zone so you can enjoy the artwork in many different ways.

Wattention interviewed Thai artist Wisut Ponnimit who designed the event’s mascot character “Mamuang-chan”. We talked about his work and the Saitama Triennale.

Wisut PONNIMIT (Thailand)
Born in 1976, Bangkok Thailand. Nicknamed Tam. Debuted in 1998 in Bangkok as a manga artist. He lived in Kobe from 2003 until 2006 and currently works in Bangkok. His works include the “Mamuang” series, “Blanco” (Shogakukan), “Hesheit” (Nanaroku inc.) and various manga art. He also participated in the Yokohama Triennale 2005. In 2009 “Hesheit Aqua” received an honourable mention at the Cultural Affairs Media Arts festival in the manga division. In 2015 he had a solo exhibition “MELO HOUSE” in Bangkok. Besides having done animation work, Tam also collaborated with musical artists such as “Baan” (2013) and Harada Ikuko.

Q: How do you feel about participating in an international event like this?
A: As I thought, I’m a bit nervous to work together with the other artists. I will have to work hard on my own art as well.

About his work
Q: What’s the style of your work? / What kind of work did you make?
A: Because the theme of this exhibition is “Discover the Future!”, I created work in that image.

Q: You also designed the event’s mascot character. Could you briefly introduce her?
A: The exhibition area is very big, the event is held at various places in Saitama. There are people who come only for the Saitama Triennale 2016 so I think most of them might not be familiar with Saitama City or its station. This is why we decided to place a guide sign with Mamuang chan near the station that guides visitors to the event. Because Mamuang chan is there, I hope people won’t get lost and will feel safe.。

Q: What kind of character is Mamuang chan?
A: I think she’s a child who doesn’t overthink things too much.

Regarding his studies and living in Japan
Q: Why did you study abroad in Japan? What sparked your interest in Japan?
A: When I was a child I loved Japanese manga and this made me start working on manga. I wanted to learn more about the origin of manga and came to Japan to better understand Japanese culture.

Q: Why do you think your work is also popular in Japan?
A: I think my art pieces has something that Japanese people cannot get from their normal life. Maybe, when they see my work they feel a sense of security.

Q: For foreigners in Japan and tourists from overseas who come to see the 2016 Saitama Triennale, please share your recommendations.
A: I think it’s an interesting event because there are many artists. The entrance is free and the weather is getting cooler so I think it’s a good chance to visit Saitama. Please come and see the event.

Like Tam said in the interview, the Saitama Triennale 2016 is a great opportunity to visit various spots in Saitama. The event’s scenery and artwork is different in every area so photography enthusiasts can also enjoy themselves as well. There are events you can enjoy together as a family, events where you can experience culture and hands-on exhibitions so please come and see them in a leisurely mood.

Near Omiya Station, one of the venues for the Saitama Triennale 2016, is a railway museum with about 36 train cars on display from the late 19th century until the latest modern bullet train. There are 5 different driving simulators such as the steam locomotive D51 (Japanese built steam locomotive) and the Shinkansen 200 series (bullet train). It’s an interactive museum where you can see, listen and touch.

Iwatsuki, another exhibition area, is the lead producer of dolls in Japan with more than 80 doll ateliers. Dolls for Hinamatsuri (girl’s festival), boy’s festival and a variety of traditional dolls have been shipped to both domestic and foreign customers. How about experiencing a doll workshop after visiting the art exhibition?

In Saitama City you can enjoy the bonsai gardens and the Omiya Bonsai Art Museum, Japan’s leading bonsai museum and the host for the 8th World Bonsai Congress in 2017 (Apr. 27 -30, 2017). There are many other interesting spots in Saitama City.

The Saitama Triennale 2016 is held until December 11th. Why not make an art journey to Saitama City?