Celebrating the new year might be the most important holiday event in Japan. Instead of Christmas, the Japanese busy themselves with pre-new year’s customs and then welcome it with a three-day celebration starting from the first day of the new year. These days are usually quiet as people spend time with family and in personal reflection. Here’s how Tokyo’s preparing for it.

What is Hatsumode in Japan? 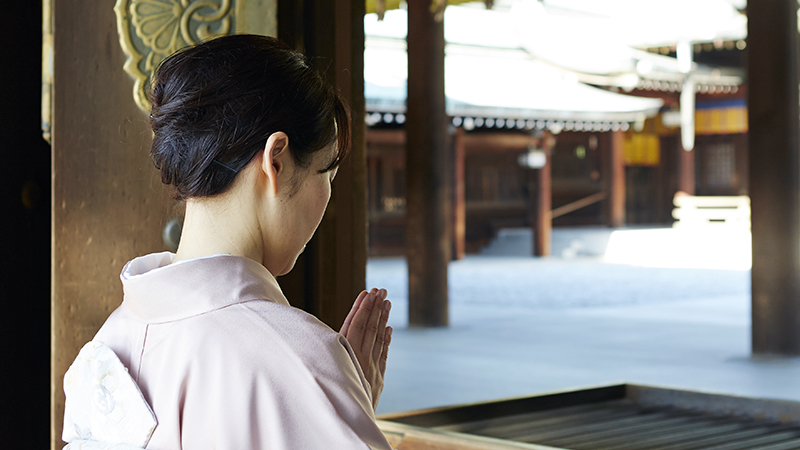 Hatsumode or “初詣” in Japan is the traditional first visit to a temple or shine of the new year. New Year’s day is one of the most important holidays on the Japanese calendar. During the Edo period and the old way of counting, everyone was one year old at birth (because they counted the time you were in the womb) and aged one year on New Year’s day. The beginning of a new year symbolizes a fresh start and people do a thorough cleaning of their homes before stepping into the new year.

The first visit may happen right after midnight, as shrines are open with food stalls and ready to sell good luck charms. If you go during the day you will definitely spot people dressed in kimono amongst the thousands of people (sometimes even a million!) lining up to pray for the shrine.

What is the History or Hatsumode in Japan?

The origin of Hatsumode – The first shrine or temple visits on New Year’s day date back to the Heian period (794 – 1185). At that time, the head of the household would pray at the family’s shrine in a secluded room. During New Year’s day, a god is supposed to visit each and every one of his/her shrines to give blessings. People wanted to lessen the burden on the gods by going out and visiting the shrine. During the Edo period (1603 – 1868), praying on New Year’s day changed from a secluded room to a public shrine. People would pray at the shrine nearest to that year’s eho (恵方). Eho is the “lucky direction” of that year. Hatsumode is considered to last roughly until the 7th of January.

Hatsumode was a way to celebrate going from the cold winter to the milder temperatures of spring. The coming of cherry blossoms and growing plants signal a new beginning. When Japan entered the Meiji era (1868), the Japanese government decided to have a standardized calendar instead of the ever-changing Japanese lunar calendar (1873). This made New Year’s day fall in the middle of winter instead of the beginning of Spring. 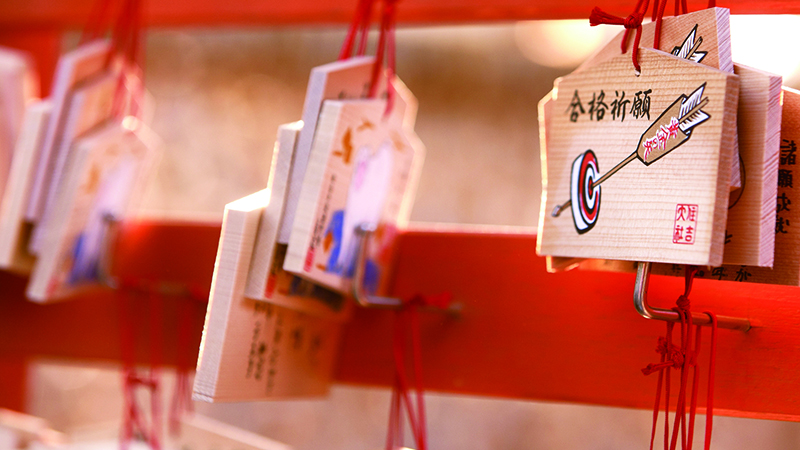 Where Should You Experience Hatsumode in Japan? 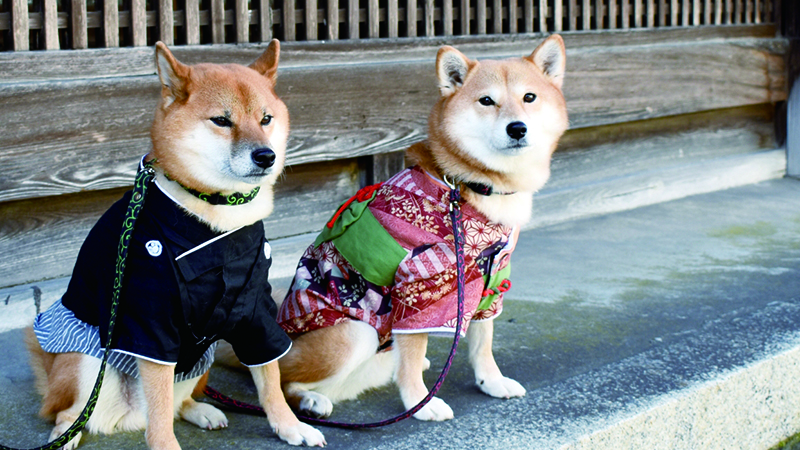 For the best luck, it’s good to follow your “eho”, or lucky direction, and visit the shrine. After all, this god is closest to your home and can thus provide the best protection. However, some shrines and temples are known for specializing in certain blessings. Here are some common places around Tokyo to experience hatsumode, or the first shrine visit of the new year.

What Does Japanese People Eat on New Year’s Day?

You could say that New Year’s day in Japan is like Christmas in Western countries. Most important is to get together with your family and enjoy a nice meal together. 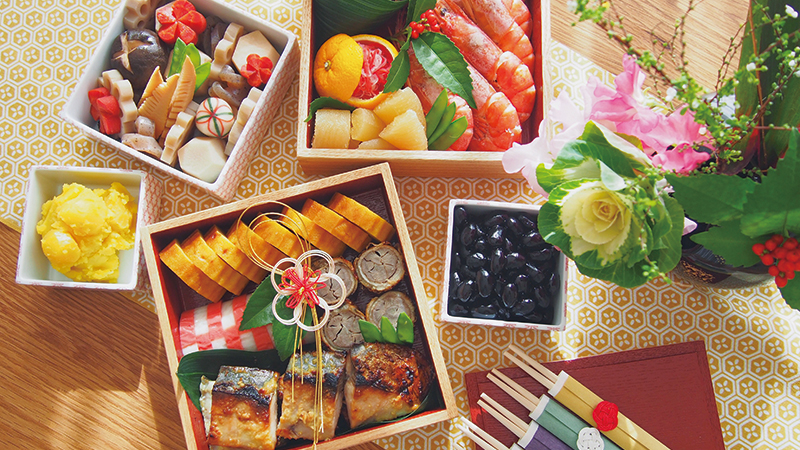 After returning from your first shrine visit people usually read their nengajo (New Year’s cards, 年賀状 ). If you are with family you get together to share your Osechi (New Year’s lunch box, おせち). If you are with friends or on your own, you usually share a meal as well. Even if you don’t have a fancy osechi box, almost everyone eats ozoni ( お雑煮). This is a soup with mochi, and the preparation varies from every region and every family. Try this recipe to make your own ozoni. 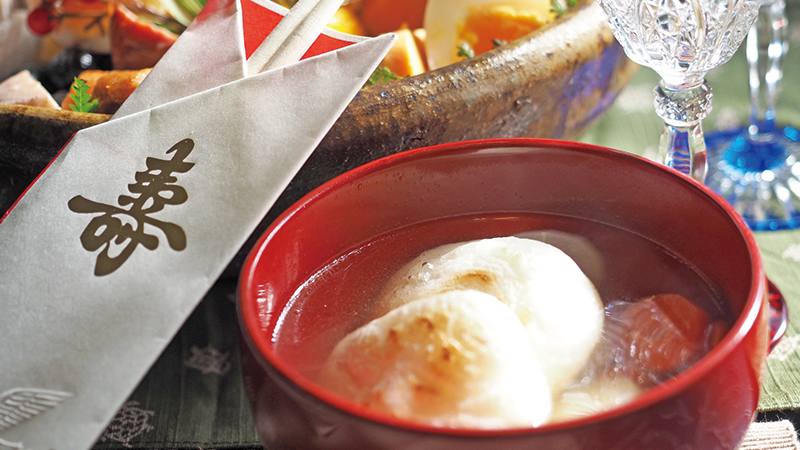 During the first seven days of the new year, there is a “cooking ban”. Traditionally this is to appease the fire god Kohji. This god would get upset if you made fire early in the year and cause natural disasters. Over time this became more of a “rest period” for housewives who worked so hard in preparation for the new year. During the New Year period, a number of hotel restaurants in Tokyo include osechi into their menu, while some of them even offer osechi buffet menus to celebrate for the first three days, in the midst of it, giving foreign travelers a memorable opportunity to taste upon the traditional cuisine.

What is Kakizome in Japan? 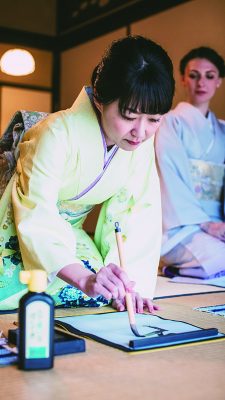 Kakizome is the traditional first writing of the new year. In Japan, as the new year starts unfolding, the first actions you take have special meaning – first prayer (hatsumode, 初詣), first sunrise (hatsuhinode, 初日の出), first sale (hatsuuri, 初売り) and many more, among which is the custom of kakizome (書き初め), or first calligraphy of the year. Usually on the 2nd of January, kakizome is practiced by drawing auspicious kanji characters like ‘dream’, ‘peace’, ‘happiness’ etc.

People usually exercise their calligraphy chops at home with their family, but for those preferring a challenge, there is Japan’s annual new year kakizome (calligraphy) contest. This Japanese calligraphy contest takes place in Tokyo’s Nippon Budokan (an indoor arena located in Chiyoda), attracting people from all over Japan. Thousands of participants of all ages – starting from elementary school students – draw kanji with ink (sumi, 墨) on paper in the allotted time, their every stroke assessed, while the whole contest is broadcast nationwide. 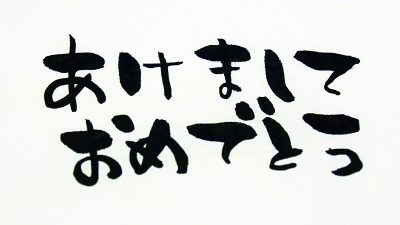 Another way is to experience kakizome through courses offered by calligraphy school, a public event, or at calligraphy hobby groups and gatherings. Some of these are available in English as well.