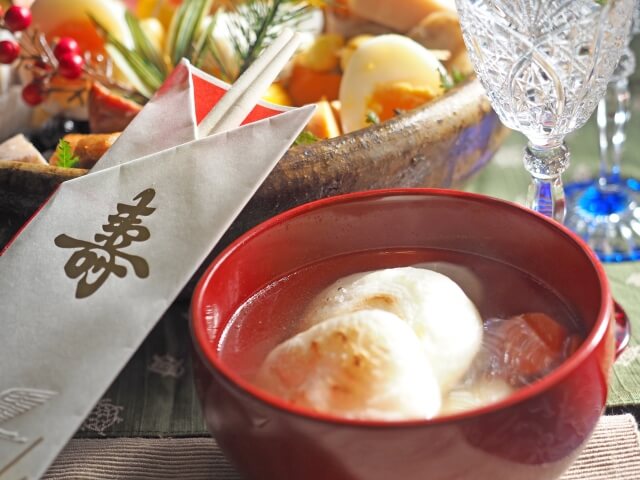 There are many traditions surround the New Year in Japan. It is one of the most magical times in Japan filled with celebration, reflection, and hope. From delicious food, exciting celebrations and entertainment, solemn prays and cultural experiences, Japan presents itself as one of the most unique places to experience the coming of a new year. Here are New Year traditions that Japanese people practice to welcome the new year in Japan.

Osoji: A Clean Slate for the Japanese New Year

Osoji is the “big cleaning” that Japanese people practice before the new year. Unlike “spring cleaning” in the West, Japanese people prefer to start the new year off right with a clean house. Osoji is very thorough, with many family members joining in to make every part of the house sparkling clean! Of course, schools and offices also participate in osoji before breaking for the holidays. The clean slate serves are great motivation to continue the new year on the right track!

Mochi and the Japanese New Year 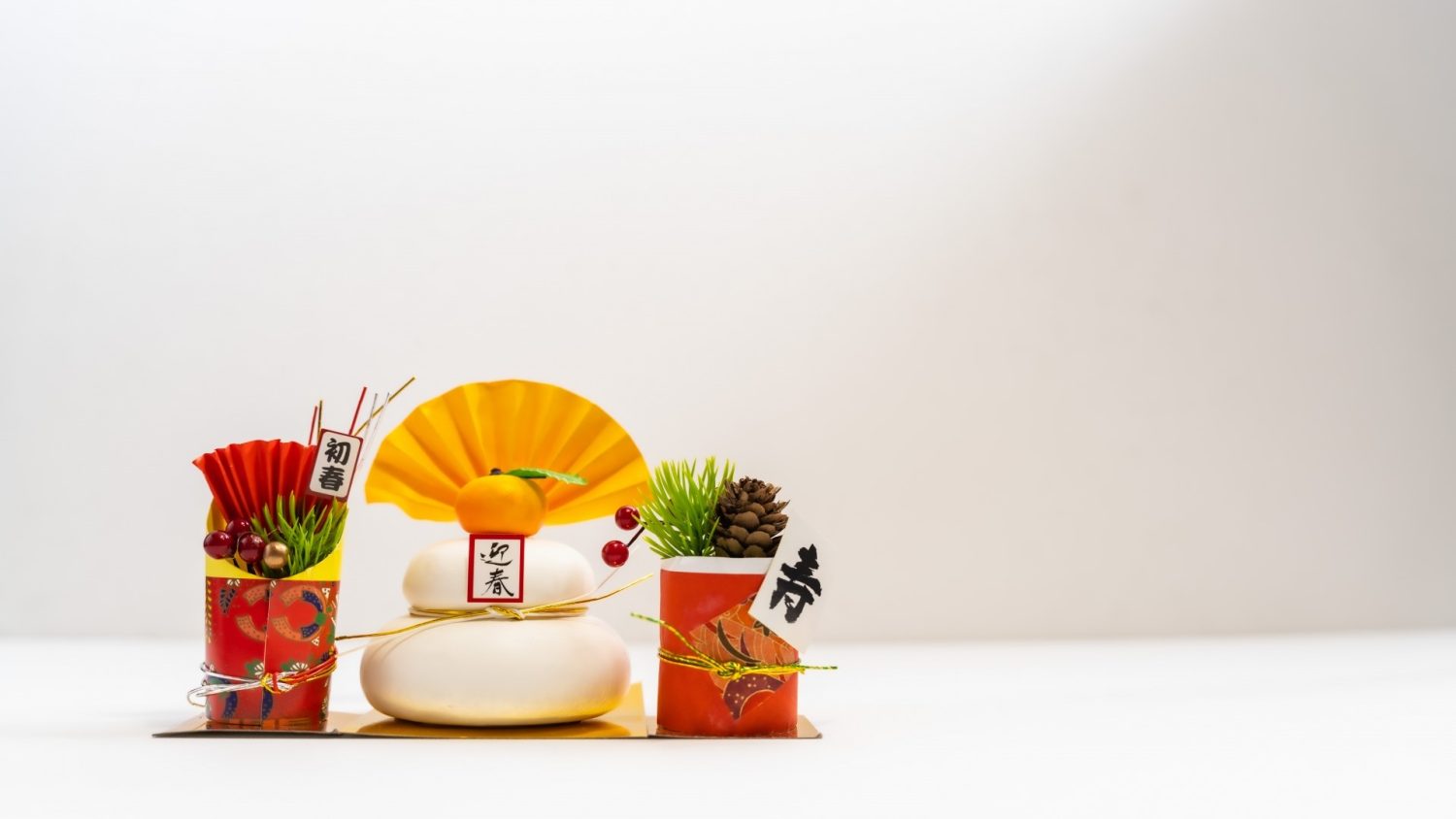 Mochi (rice cake) gets an upgrade from just a typical tasty treat around New Year, being a centerpiece of many household decorations during the holidays. Kagami-mochi, for example, is a key element of a shimekazari new year wreath. You can find these double-stacked mochi around the entrances of houses and offices.

These sticky rice cakes aren’t just for decoration either. Mochi is also traditionally eaten on New Year’s Eve. In fact, there is even an annual tradition around the high-paced pounding of rice to make mochi. This long-standing practice is called mochitsuki. Professional mochi makers create quite the spectacle as the hammed slams down in perfect coordination with the person who turns the mochi between each hit.

What are Japanese Kadomatsu? 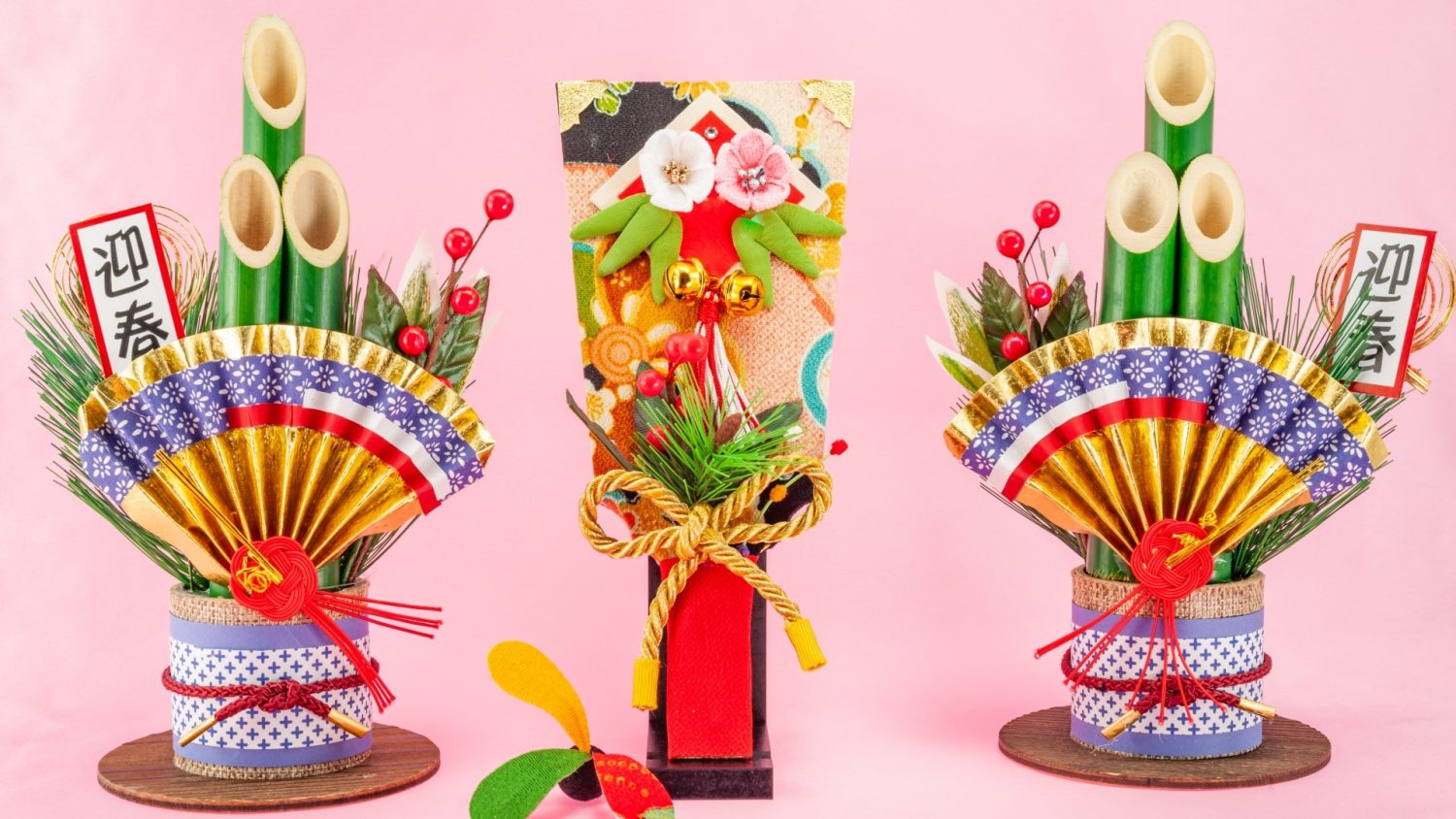 Speaking of New Year’s decorations, you may notice an arrangement of bamboo and pine outside of homes and business around this time. These traditional Japanese New Year’s decorations are called kadomatsu. Usually, they appear just after Christmas and last until the after the first week of the new year. Each element of the Japanese kadomatsu decorations, include pine, bamboo, and plum trees, represent longevity. Kadomatsu are put out in hopes of receiving a great harvest and serve as temporary resting place for the deity Toshigami sama.

What is Japanese Osechi? 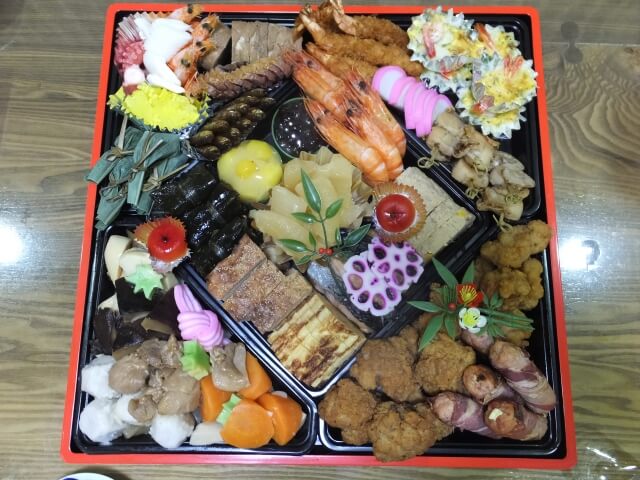 Japanese osechi is a special box, or jubako, filled with food that is eaten over the new year. This traditional Japanese New Year food became common around the Heian period. Traditionally, it was taboo to cook over the new year period. For that reason, meals over the holidays were prepared in advance. Today, osechi is still a very popular tradition, with orders for the special Japanese New Year food boxes flooding in before the year’s end.

In addition, special chopsticks called iwai-bashi are used to eat the Japanese food in osechi and on other special occasions. These celebration chopsticks narrow out on both ends, unlike regular chopsticks. The idea is that gods or deities eat using the other end, so it is actually rude to switch back and forth between the sides. 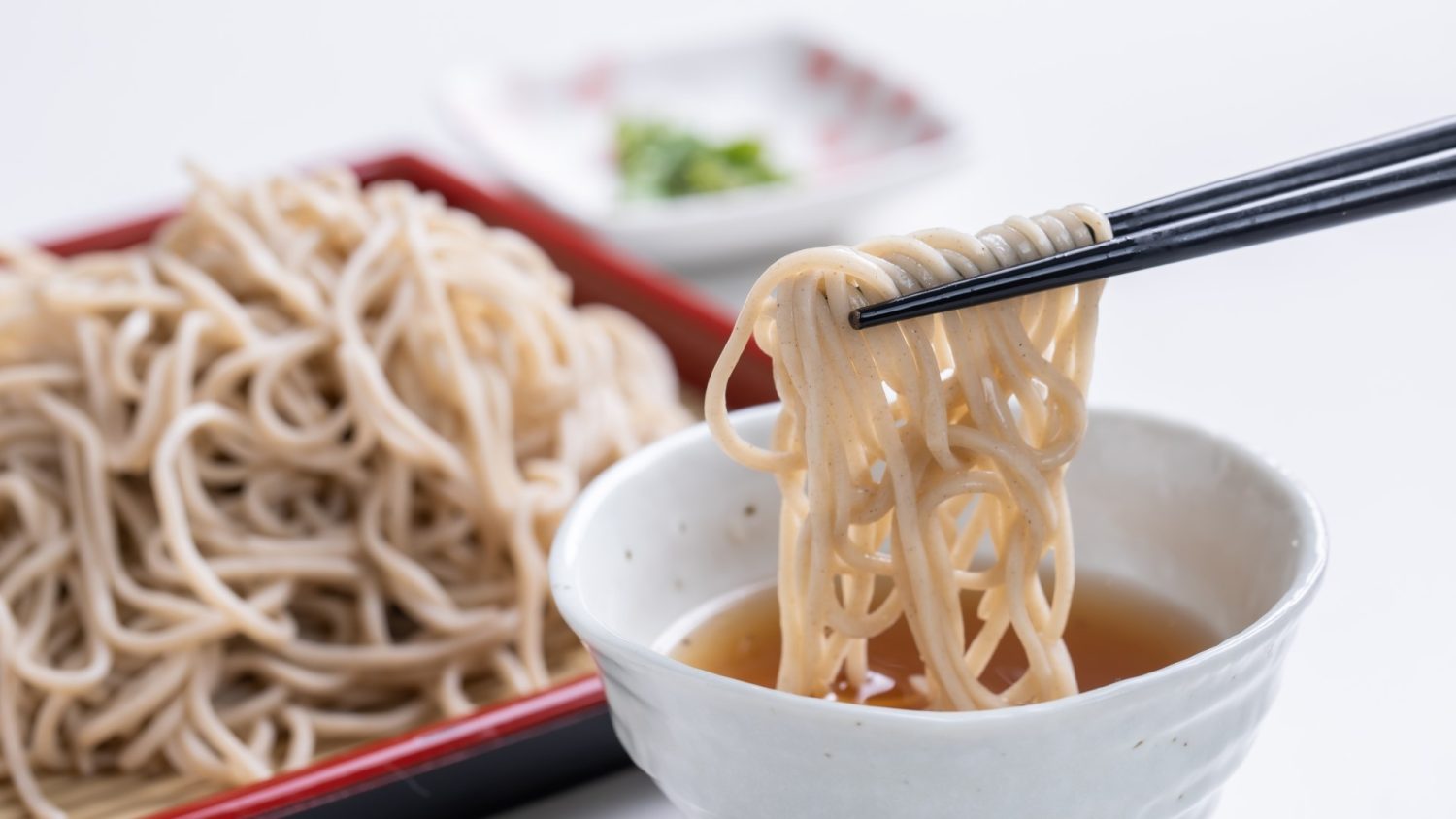 Another traditional New Year food in Japan is toshikoshi soba. Since the Edo period, these Japanese noodles are eaten on New Year’s Eve, as the name literally translates to “year-crossing noodle”. Unlike ramen, soba is made from buckwheat noodles and are healthier, and the long noodles are said to represent longevity and a healthy life.

Usually the dish is kept simple, with just some negi used as garnish. However, there are no real rules, and people add tempura and other ingredients Of course, you don’t have to be in Japan to celebrate the new year with this Japanese food. So, grab a bowl of delicious soba and welcome the new year with a full stomach!

Nengajo are traditional New Year’s greeting cards in Japan. This custom is like Christmas cards in other countries. Japanese people send nengajo to their family members and coworks to show their appreciation. Basically, nengajo look like post cards with space on the back to write a message and the address of the recipient.

Of course, you can find a variety of nengajo at many stores. However, nengajo are an opportunity to show your creativity and give your greetings a more personal touch! Feel free to make your own nengajo using the standard size and templates.

Otoshidama: What Gifts Are Given for Japanese New Year 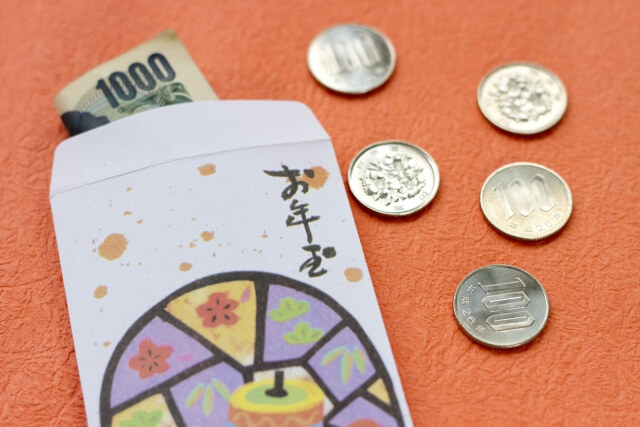 Otoshidama is a traditional new year’s gift of money that children receive from their family. Special envelopes, that children have come to know well, hold the cash that brings children in Japan happiness each year. Usually, the envelopes are designed with the year’s zodiac animal or the adorable maneki neko. On average, children receive about 5,000 yen in each envelope. Of course, older siblings typically are given more until they finally become adults at 20 years old.  If you’re lucky your family might let you get away with receiving money up until 22!

For adults who no longer receive otoshidama there are fukubukuro. These lucky bags contain secret items worth at least twice the price of what you paid. Every shop makes a limited amount of fukubukuro so people often line up well in advance to get a deal at their favorite shop. There are also many bargain sales during the new year called hatsu-uri. You can find some seriously good deals, even in places like Ginza in Tokyo!

While slurping down your toshikoshi soba, you may hear the chimes of distant bells. That would be from the tradition of joya no kane. Joya no kana is a Buddhist tradition. Around midnight, the ringing begins coming from temples all around Japan. The bell is struck 108 times to signify the purification of each earthly desire that humans suffer from, according to Buddhism. Because there are so many strikes, the ringing can last for about 1 to 2 hours.

Hatsumode is the tradition of visiting shrines and temples for the first time of the new year. The traditional first shrine visits of the new year date back to the Heian period (794 – 1185) when the head of the household would pray at the family’s shrine in a secluded room. These days, however, it is a much more public event, with people lining up for hours to pray for new year at their preferred shrine. Some shrines specialize in specific wishes, such as business success, family happiness, and so on.

At larger shrines, the event has a festival-like atmosphere where you can enjoy hot sake or amazake, traditional food, and receive fortune and lucky charms. Though it can seem more like a casual tradition with party-goers journeying straight from the clubs to Shibuya’s nearest popular shrine Meiji-jingu on New Year’s Eve, some take the tradition more seriously. So, you can still see people wearking kimonos and other traditional wear for hatsumode. 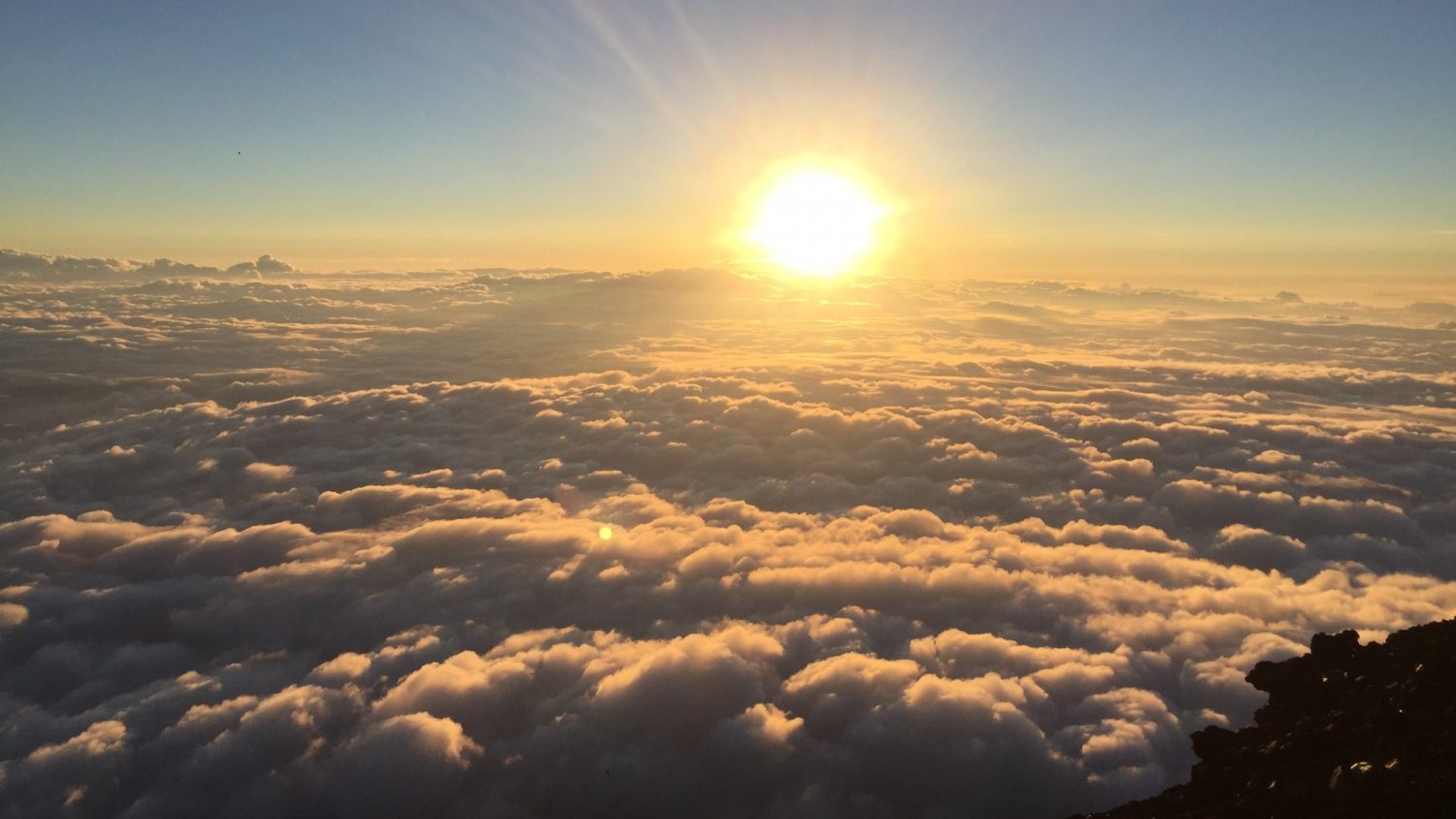