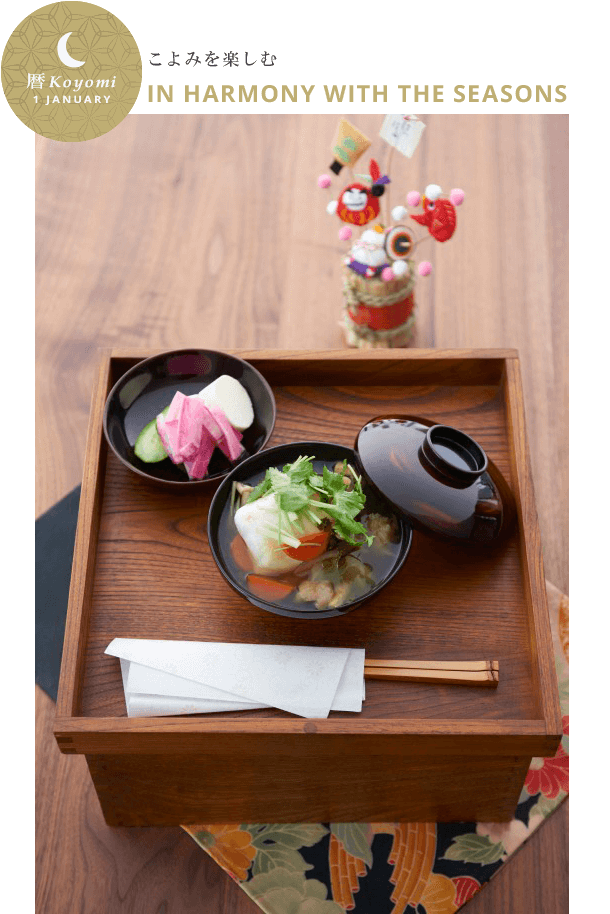 Zoni is the name of a soup containing mochi that is traditionally eaten in Japanese households on the first day of the New Year. Depending on the region, the ingredients can vary, and the soup may be a clear soup, soy sauce-based, or made with miso or white miso. But whatever the style, zoni is a combination of a soup containing several vegetables.

Preparations for a New Year’s feast traditionally begin on December 31. Considering that the first day of the month had been called tsukitachi (rising

of the moon), a dark, moonless night was important for resetting everything, and eating zoni on the morning after that also meant that the body was being prepared to accept new things.

Burying yourself in the diversity of a full year—despite being surrounded by an array of happenings, the people of ancient times must have focused their wisdom and consideration for their health into these tiny servings of zoni, praying that they could continue to live on.

Eating mochi, where the god of the New Year had been believed to dwell, first thing in the New Year, is an act that represents receiving their energy. For the Japanese, this god had no been doubt a manifestation of their ancestors.