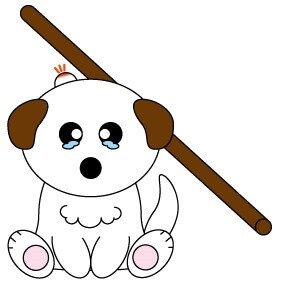 Like any other language and culture, Japan has its own common phrases or proverbs that don’t make much sense first class. By breaking down the meaning and history, you can learn a little about Japanese culture.

What Is the literal translation of “inu mo arukeba bou ni ataru” in English?

The Japanese phrase “inu mo arukeba bou ni ataru” (犬も歩けば棒に当たる) basically translates to “If a dog walks, it will bump into a stick” in English, roughly. The sentence is a conditional phrase. The Japanese word “inu” (犬) means dog. The verb “aruku” (歩く) is transformed into its conditional phrase “arukeba” (歩けば). “Stick” in Japanese is “bou” (棒) , and “hit” is “ataru” (当たる) in Japanese. The particle “ni” (に) indications direction.

What is the real meaning of the Japanese phrase “inu mo arukeba bou ni ataru”?

Now that you know the literal translation of the Japanese phrase “ino mo arukeba bou ni ataru”, you may be scrathing your head trying to decipher the real meaning. It is a proverb that could be taken as “there is always a possibility of failure”. Basically, it is a warning to people who are too hasty. The walking dog is a metaphor of a person who acts in haste and impulse. Just as the dog bumps into a stick, something will happen to a person that acts in haste. Wandering aimlessly in life can lead to misfortune, so it’s best to avoid unnecessary and trivial things.

Despite the phrase sounding like a stark warning, some view the proverb in a more positive light. “Ataru” (当たる) which stands for “bumping into” or “getting hit by” in this sentence, is also often used for winning something, as in “hitting” the jackpot. The more positive meaning of this Japanese phrase could be translated to something like the popular English saying “every dog has his day”. So, instead of discouraging people from taking action, this Japanese proverb is inspiring. This is why the saying started to be used in a positive way more and more often, and its original meaning was slowly forgotten.

Hopefully after leaning this helpful Japanese, you feel hopeful as well as enlightened. Don’t give up because something good is bound to happen eventually! Just keep trotting along like a happy pub until you find a bone.