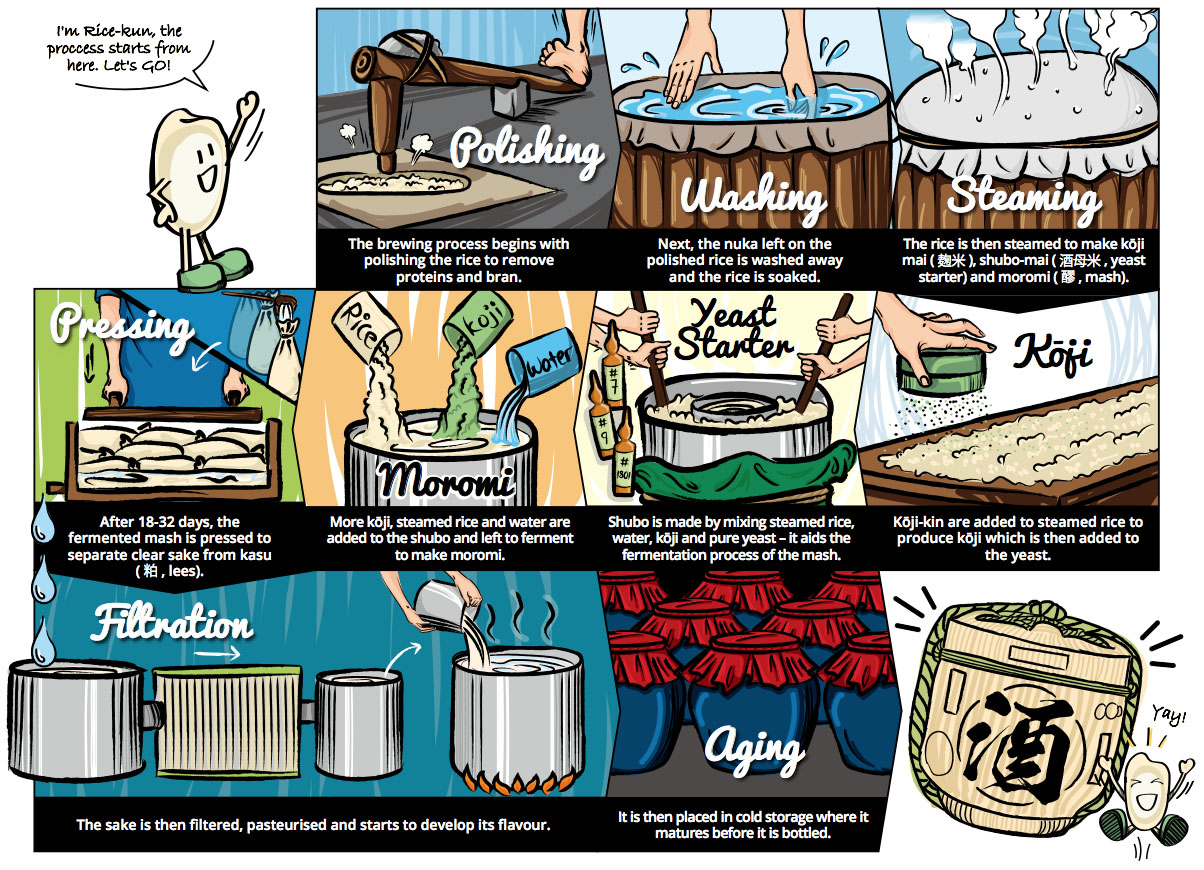 How Its Made: Beginner`s Guide to Sake

Despite being called a rice “wine”, sake has more in common with beer as it is brewed through a double fermentation process. Making quality sake involves 4 key ingredients Rice, water, kōji and yeast.

Age-old records written reveal that pasteurization and the process of adding ingredients to the main fermentation mash in three stages were established practices since the late 15th century.

The brewing process begins with polishing the rice to remove proteins and bran.

Next, the nuka left on the polished rice is washed away and the rice is soaked.

After 18-32 days, the fermented mash is pressed to separate clear sake from kasu ( 粕 , lees).

More Koji, steamed ice and water are added to the shubo and left to ferment to make moromi.

Shubo is made by mixing steamed rice, water, koji and pure yeast it aids the fermentation process of the mash.

Koji kin is added to steamed ice to produce koji which is then added to the yeast.

The sake is then filtered, pasteurized and starts to develop its flavor.

It is then placed in cold storage where it matures before it is bottled.

There are about nine basic kinds of specially grown rice that are used to make sake and each of them produces a unique flavor. The king of these sake rice breeds is Yamada Nishiki Rice which gives a fragrant, well-blended, soft flavor. The best grains are grown in Hyogo and Toyama. To produce aromatic sake, rice needs to be polished between %50 to %70. The more polished the rice, the more delicate it becomes, and the higher the grade of sake it produces.

Water makes up almost 80% of sake and helps develop its one-of- a-kind taste. Breweries often source their water from nearby springs, mountain runoffs, springs, etc. The water is either kōsui ( 硬水 , hard water) or nansui ( 軟水 , soft water) and they can affect the sort of flavor profile that the sake will take on.

Yeast has a big influence on how a sake will taste and smell. There is a wide variety of strains, but the most common ones are #7,#9 and #1801. #7 is commonly used in complex sake like Junmai and Honjozo for its subtler, earthier rice aroma while #9 and #1801 are popular for their floral and fruity flavor and fragrance.

20% of rice sake used for brewing is turned into a mold called kōji-kin. Kōji-kin converts the starch in rice into sugar through the process of fermentation. This affects the depth of umami flavor in sake.