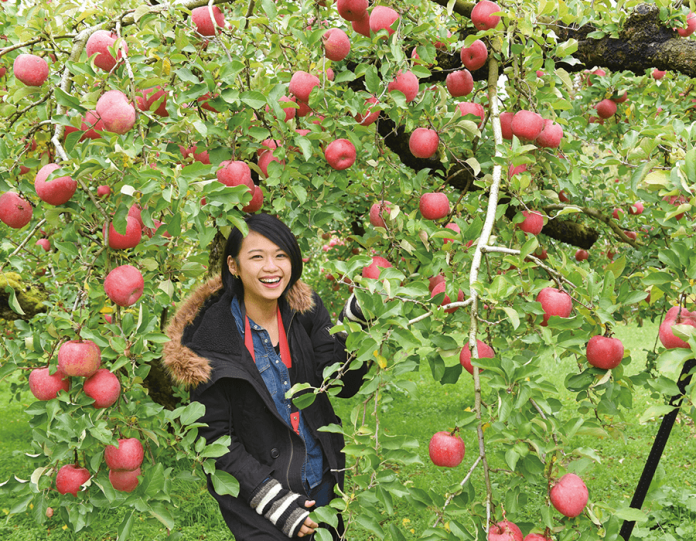 Mount Iwaki, also called “Tsugaru Fuji” (Tsugaru describes the western region of Aomori ken), is in Aomori, Honshu’s northernmost area. Autumn is the best season to enjoy a variety of colours at Oirase Mountain Stream and Lake Towada, as well as the lush red apples growing in abundance at the foot of the mountain; Japanese apples are famous for being quite large and flawless in taste and texture. The cultivation of apples in Aomori began at the start of the Meiji Restoration by unemployed samurai. In 1875, the region, which had not been used for apple cultivation before, received three apple saplings from the West. Samurai, who had lost their social status, exchanged their katana (single-edged swords) with pairs of shears and refined the technique of sentei (pruning). Hence, Aomori became Japan’s best area for producing apples. These ripened fruits, which survive harsh climate conditions such as heavy snow and drastic temperature differences between day and night, offer a unique harmony between sweet and sour, giving them an especially rich flavour.

Hirosaki, the pioneer city for apple production, features about 50 shops which produce apple pies. Growing popularity among the tourists are the “Apple Pie Map,” showing all the shops selling this delicacy, as well as the baking event where an apple pie with the diameter of three metres is made. Including the production of apple juice and cider, this fruit plays an essential part in Aomori’s culture.

After enjoying the picturesque scenes of autumn colours at Oirase Mountain Stream, Lake Towada and from the Hakkoda Ropeway, set off to Hirosaki and get a taste of Aomori’s local speciality!