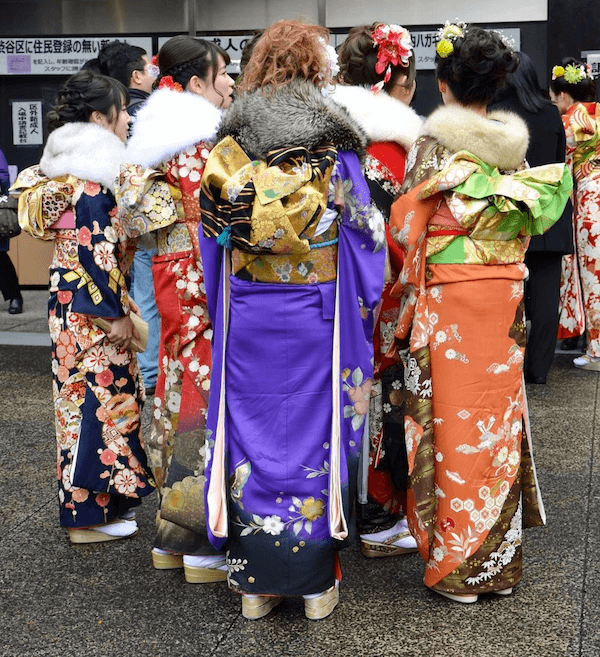 Kimono literally means “something that is worn” – but there are many Japanese Kimono types for different occasions.

The basis of the kimono is, of course, the kimono robe itself. There are various kimono styles, patterns, and colors to match the seasons. However, there is also a stark difference in Japanese kimono types. Each has it’s own unique place in Japanese culture and customs. Impress the locals with your knowledge of kimono styles!

Ofurisode is the most common furisode kimono type and is the most formal. It also has some padding which adds weight and durability. Typically Ofurisode is worn in formal ceremonies by entertainers or brides at a wedding as one of the classiest kimono styles.

Chu-furisode have become more popular with young women. Unlike the Ofurisode, they do not have any padding on the inside. As a result, they are lighter and cooler.

Kofurisode, with the shortest sleeves, can also be worn with formal pants, or hakama. Compared to the other furisode kimono types, it is not as common. The look, especially with the hakama and boots, calls back to the Meiji period. During that time, it was the kimono style of many Japanese school girls.

Before the Meiji era, Hikizuri kimono was worn by wealthy women of high rank. Now, the chances you will see this kimono type in public are very slim unless you are in Kyoto or the Asakusa area of Tokyo. Hikizuri means “trailing skirt” and the kimono got this name because of its length. In contrast to other kimono types, Hikizuri kimono is mainly worn by geisha, maiko or stage performers of traditional Japanese dance. With modern times, women had more opportunities to leave the house which resulted in the current kimono styles that requires folding the extra fabric around the waist.

Tomesode is the most formal kimono type worn by married women. Specifically, the pattern of a Tomesode is always below the waist and has a beautiful design. In fact, it sometimes includes gold. In western culture, this kimono type is equivalent to and evening dress. It has either 3 or 5 crests. The latter is more formal, and they range from colorful to just black varieties. The black variety, Kuro Tomesode, are only worn by married women. However, the colorful Iro Tomesode may be worn by unmarried women. Of course, the Tomesode make an appearance at formal events like weddings and tea ceremonies. Among other kimono types, it is one of the most stunning.

What is Houmongi? The literal meaning of Houmongi is “visiting wear”, and both married and unmarried women wear these semi-formal kimono types. Houmongi come in many elegant colors and designs that are suitable for various ceremonies and semi-formal house parties. The pattern flows over the shoulder to the seams in the back and is visible on the sleeves and under the waist. This kimono style is created using the “eba” method which looks like a continuous painting stretched across the entire kimono. Even though its history is quite old, when it appeared in the Taisho period, it was a new kimono type. 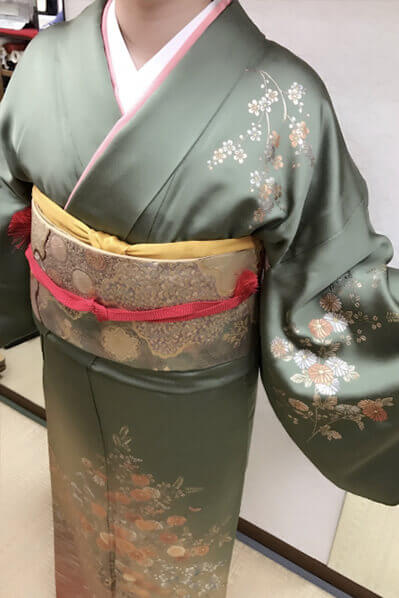 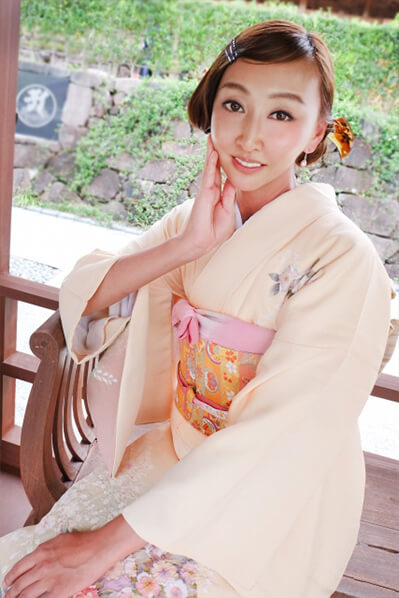 These kimonos types have a plain color without any patterns. The beauty of these kimono styles comes from simplicity. Because the design is not too flashy, it does not disrupt solemn events or draw too much attention to the wearer. However, that doesn’t mean they are only worn on sad occasions. Iro Muji often fly out of the closet for family celebrations or graduation ceremonies. Also, there is even a specific kind of Iro Muji kimono for tea ceremonies. Their formality depends on the amount of crests on the kimono.

Japanese people know this kimono as the casual kimono. Compared to other kimono types, you will likely see these the most often. They have a repeating pattern that often with vertical stripes. Even though they are beautifully crafted, do not wear this kimono type for a formal event! Instead, it is great for a stroll around the town, or small celebrations. In fact, this was the most common way to dress before Western clothes became popular in Japan. Can you imagine a time when the streets were covered in these lovely designs as locals went about their day?

This cotton kimono’s light weight and lack of undergarments make it perfect for summer. As a result, the yukata appears during festivals or on a hot day out. In fact, people rarely gather at the busy local festivals or spectacular summer firework displays without wearing a yukata. Though it is the most informal, the yukata is the most popular among Japanese kimono types. As a result, the yukata is one of the first images to come to mind when thinking about Japanese culture, especially when thinking about festive celebrations. Geta, wooden kimono footwear, are worn under this kimono and the obi is tied in a simple way. You’ll have plenty of chances to experience the comfort of a yukata in Japan if you visit any Japanese ryokan or hot spring town.

This is a bride’s pure white kimono. The official name for the dress is ‘Shiromuki’. In fact, the white color of the kimono dates back to the days of the samurai. At that time, a woman would show her submission to the family she was marrying into. Being white, it meant she could easily blend into the family’s colors. Clearly, these kimono types have a special place in Japanese culture and history. In addition, they enhance the beautiful bride on her special day.

We’ve mainly talked about women’s kimono styles. However, there are also kimono types for men. In fact, in the old days men wore kimono every day. In modern times though, men’s kimono styles are not as popular. Men’s kimono are simpler, and the colors are more subdued. Specifically, the most formal men’s kimono type is a combination of a hakama (kimono pants) and Haori (kimono jacket). The most common men’s kimono style, kinagashi, is simply worn with an obi belt tied around the waist.

And many more kimono styles

Japanese kimono types have evolved over time and the rules for wearing one became less strict. As a result, young people make kimonos out of modern fabrics and mix flashy colors with unconventional accessories. Now that you know about the various Japanese kimono types, try one on for yourself! There is one to fit every personality and every occasion. What better way is there to experience Japanese culture than to wear part of it on your body.

Continue reading part 2 to learn all about the different obi styles.