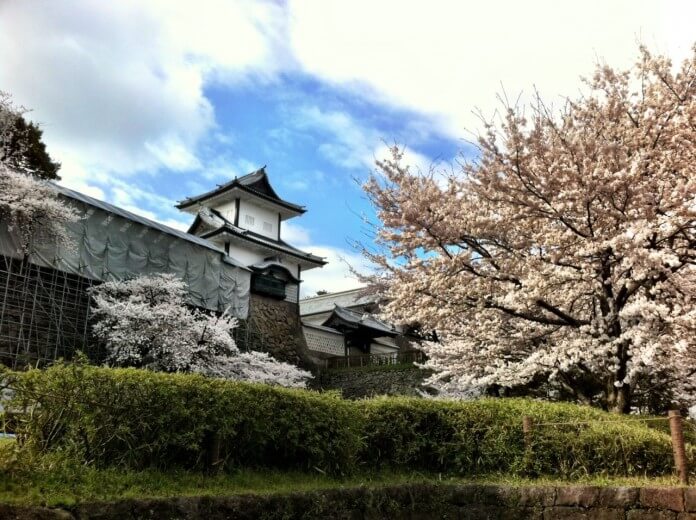 Located on the coast of the Sea of  Japan, Ishikawa-ken 石川県, Ishikawa-Prefecture) is in the Chūbu region of Honshū (本州, main island). Surrounded by the Sea of Japan on one side and mountainous regions on the other, Ishikawa is rich in resources and holds numerous treasures for visitors to discover.

Formed in 1872 through the merger of Kaga Province and Noto Province, Ishikawa’s history and tradition is heavily associated with the Maeda-shi (前田氏 ,Maeda clan) who were one of the most powerful samurai families in Japan. Kanazawa, in the then-Kaga province, acted as their headquarters from 1583 until the Meiji Restoration in 1868. Till this day, Kanazawa serves as Ishikawa’s capital city.

Senmaida in the day  Photo source

Some other sites worth visiting are the 21st Century Museum of Contemporary Art, Kanazawa, Senmaida (千枚田, 1000 Rice Fields) and Haku-san (白山, Mount Haku) – which is one of Japan’s Sanreizan (三霊山, Three Holy Mountains) and a potentially active volcano.

Due to the Maeda Clan, Ishikawa’s traditional and cultural performance arts and crafts are heavily influenced by traditional samurai lifestyle and culture.

Sadō (茶道, tea ceremony), introduced in the mid 17th century by Kaga’s second lord Maeda Yoshitsune, in particular has left lasting impression on many of Ishikawa’s arts and crafts, including their lacquerware and sense of omotenashi (おもてなし, hospitality and service).

Yamanaka-shikki master Okada-sensei demonstrates how to apply delicate Kanazawa gold leaf to a fine piece of lacquerware at a recent live-demonstration at Isetan.

Introduced to Yamanaka in the 17th century, Yamanaka-shikki (山中漆器, Yamanaka lacquerware) originally used various woodcraft techniques such as sensujiniki (せんすじにき, thousand-line engraving) and komanuri (こまぬり, concentric circles) to create homely everyday items . Designated as a traditional craft in 1975, Yamanaka lacquerware developed into beautiful pieces of art when maki-e (蒔絵, lacquer sprinkled with gold or silver powder/leaf) was introduced to the craft. Since then, Yamanaka has been producing high end products that serve as beautiful souvenirs.

Ishikawa is also home to Kagaya Ryokan. Located in Noto (north Ishikawa), Kagaya is a seaside ryokan (旅館, traditional Japanese inn) that has both traditional Japanese rooms and modern western rooms. Well-known for their meticulous care of their customers, Kagaya’s believes in “doing everything as if someone is watching you” and “always doing it the right way”. Their high standard of omotenashi is reflective of the samurai who paid careful attention to every small action they take.

Kagaya’s fastidious service, gourmet menu and elegant rooms have even won the favour of Emperor Akihito, who stayed in a Hamarikyu suite  at the top of Setsugekka (Kagaya’s traditional themed wing).

Because Ishikawa is surrounded by sea and mountains on either side, there is an abundance of seafood, farmed and wild vegetables and meats. Japan’s second largest fishery is found in Noto, making Ishikawa one of the best places to enjoy fresh, seasonal seafood no matter where you eat.

One of Ishikawa’s speciality dishes is oshizushi (押し寿司, pressed sushi) featuring seafood such as anago (穴子, salt-water eel) and zuwaigani (ズワイガニ, snow crab). There’s also a pickled turnip and yellowtail version called kabura zushi ( かぶら寿司) that is found only in Ishikawa. Another traditional dish is jibu-ni (じぶ煮), a stew made with flour-coated duck or chicken meat, wheat gluten, vegetables, and mushrooms all simmered together in dashi stock.

Isokurumi, a local Ishikawa side dish is made from a mix of walnuts and small fish and shrimp. It was one of nine foods available at Ishikawa’s booth at Oishii Japan 2015. Other foods included oshizushi, steamed aged yuzu, wagashi (和菓子, traditional Japanese confectionary) and inari (いなり, deep fried tofu skin).

Ishikawa is so famous for and dedicated to the fermentation process that they even have a Fermented Food College, Hakkou University, that specializes in the study of fermentation. Recently at Oishii Japan 2015, some of the facility came down to Singapore for the first time to conduct a lecture and share their knowledge.

Like many other Japanese prefectures, Ishikawa also has their own local sakagura (酒蔵, sake brewery). A majority of the breweries are found in Noto and Kaga while the remainder are closer to Kanazawa. Over the years, Ishikawa sake has seen a change in the flavour of their sake. However, despite going from fairly heavy and sweet taste to lighter, drier ones, Ishikawa’s sake remains clean, fragrant, light with deep complex notes. Most of Ishikawa’s sake is made from water running off Haku-san into the Tedorigawa river and 80% the sake is consumed in the prefecture itself.

Have you been to  or are planning to go to Ishikawa? Tell us what you’re looking forward to or if you have any tips for visiting this prefecture at our Facebook page or check out our feature on Ishikawa in our latest issues.

How to get to Ishikawa: