Bold Japanese kumade stand out among other traditional Japanese crafts. Indeed, these Japanese packed with kumade decorations easily catch the eye. The Japanese term “wabi sabi,” which refers to the Japanese view of aesthetics: appreciation for simplicity, modesty, and imperfection. Many well-known Japanese designs such as withered old tea houses, traditional textiles, and naturally glazed pottery often reflect wabi sabi aesthetics. But, when it comes to kumade decorations relating to prosperity and fortune, simplicity is thrown out the window, and the “more is better” mentality takes over. After all, everybody wants all the luck they can get, right? One of the best “more is better” design examples is the kumade which features a dazzling array of Japanese lucky charms.

Kumade are bamboo rakes. Yes, rakes like those you use on the leaves, but smaller and just for decoration. They represent “raking in” heaps of success, wealth, and good luck, so many business owners, purchase kumade around this time of year. These extravagant decorations come in different sizes, adornments, and prices. Handheld size Kumade are around 1,000 yen to 2,000 yen, but larger ones range from 10,000 yen to 50,000 yen, or even more.

The Lucky Mallet on the kumade appears in the story of “Issun Boshi” (One Inch Boy). In the tale, the golden lucky mallet grants a one-inch-tall boy’s wishes. With a swing of the lucky hammer, he was able to grow to about 6 feet tall and conjure food and fortune.

Koban (Japanese oval gold coin) symbolize, of course, money and fortune. This coin became a form of currency during the Edo period. Today, it remains an important fixture in Japanese culture. In fact, the koban coin often appears in pop-culture with beloved characters. 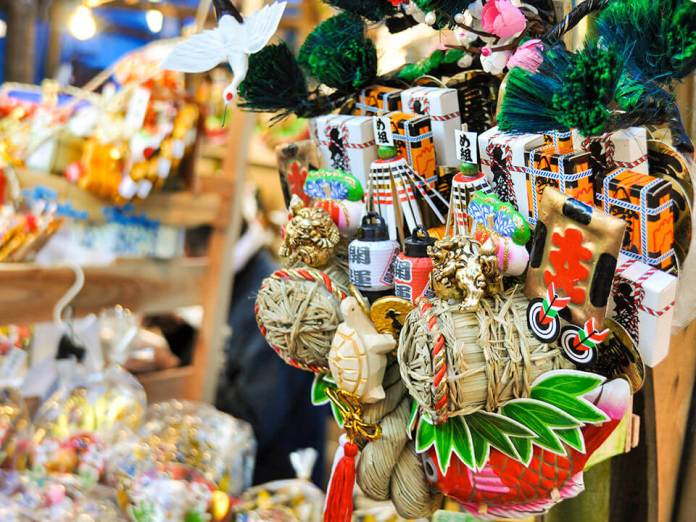 The Crane and Turtle are also popular in kumade decorations. As represented in a Japanese saying, “a crane lives 1,000 years, and a turtle lives 10,000 years,” they both symbolize longevity. In fact, the expression is fairly accurate as both the crane and turtle live much longer than other animals.

In the photo above, the Red snapper is under the bamboo leaves. Ebisu, one of the seven lucky gods, is always depicted holding a red snapper under his left arm. Thus the fish became a symbol of good fortune. According to Japanese culture, eating this lucking fish in its entirety brings good fortune. Its charm may also come from its striking red color. You may have noticed that bright red colors appear at most shrines and temples in Japan.

The owl, a symbol of wisdom in Western culture, holds a special place in Japanese people’s hearts. The Japanese word for an owl is “Fukurou,” which not only includes the word “Fuku (happiness),” but also can be translated into “Fu (no)” “Kurou (suffering).”

So there you have it. Kumade are packed full of symbolism and eye candy. They are often displayed near the entrances of offices and restaurants. When you happen to see them, try finding as many symbols of good luck you can. It’s like a little treasure hunt.

Japanese crafts may be better known for their wabi sabi aesthetics. But like many other cultures in the world, Japanese culture is multifaceted and diverse. Simplicity might bring peace and quiet, but embellishment might bring festivity and liveliness. Both are essential parts of Japanese design, and I find the juxtaposition very interesting.