Everything You Need To Know To Become A Ramen Expert

Just like how spaghetti is served in different sauces (tomato-based, carbonara and alle vongole come to mind), ramen comes in a wide array of different soups. To know all about ramen, first you have to know all the flavors of soup. The flavor of ramen soups vary from each other just as much as the character of one ramen master varies from another. However, most ramen can be categorized in the following types.

Shoyu Ramen is the most basic version of Japanese ramen, and has its roots in Tokyo. A soy sauce based soup similar to that of Japanese noodles as soba and udon was used to familiarize the Japanese with a type of noodle that was still foreign to the nation at the time. Together with soy sauce, a wide array of ingredients such as chicken bones, niboshi (dried sardines) and vegetables are used to bring out an original flavor. There is no shortage of Shoyu ramen shops in the nation’s capital.

For something a bit lighter on the stomach, Shio Ramen is the best choice. That’s because the soup is not as thick and fatty as most other ramen. Together with salt, which is used as the basic ingredient for the soup, chicken bones and pork bones are often used in the soup broth. However, they aren’t boiled as deeply as in other ramen. This results in a more delicate flavor. Tanmen, a popular type of Shio Ramen, is especially beloved by the ladies as it is topped with a mountain of fresh vegetables.

Miso Ramen first came to life in the fifties when a customer at a small eatery in Sapporo asked the cook to put ramen noodles in his tonjiru (miso soup with pork meat). Today, miso ramen is often mixed with pork bone broth and pork lard to keep you warm during the winter. Corn and butter are often used as toppings, which you will not often see in another ramen. Make sure to slurp down a bowl yourself next time you visit Sapporo!

You could say that Tonkotsu Ramen is what cream sauce is to spaghetti. The deeply boiled pork bones create a thick, creamy soup. Without a doubt, it’s the heaviest on the stomach among the basic ramen soups. Although Tonkotsu Ramen – which has its origins in Kyushu – is arguably the most popular sort of ramen today, it was not until the nineties that it became popular throughout the country. Head down to Fukuoka to find great tonkotsu ramen.

Tsukemen: Another way to serve ramen

Tsukemen puts the main focus on the noodles rather than the soup. For that reason, they’re served separately to dip in the soup. Noodles for tsukemen are usually thicker than that of standard ramen, and are cooled down to create an extra firmness. This version of ramen was invented by Kazuo Yamagishi of Taishoken Ramen in 1955, who passed away in April 2015.

All about ramen: The dashi

The essence of a ramen’s soup lies in its dashi, or soup stock. A number of different ingredients are boiled over a long time so that their flavor is extracted. The choice of ingredients for the soup stock and how long to boil them, are crucial elements that heavily influence the flavor of the soup. A true ramen master will keep perfecting this art for his entire life.

As you can see, the ramen soup comes in all kinds of flavors. ENKAIPPIN  a Kyoto-based ramen chain, is known for its super-thick (viscous) soup. This thick soup has got very dense flavor, so customers tend to drink it up until the last drop! Some even order a bowl of rice to dip into the ramen soup. When the last drop of soup is finished something emerges on the very bottom of the ramen bowl. 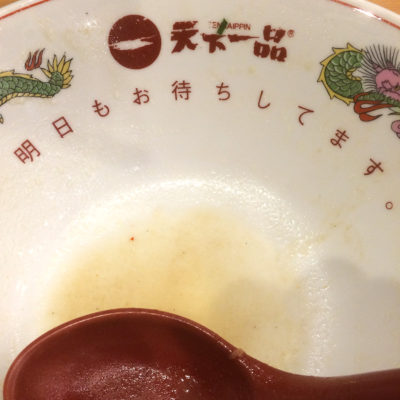 “We’ll be looking forward to your visit again tomorrow.” A good surprise is surely one of the core ingredients to gain attention of customers!

All about ramen: The Noodles

In Japan, you can specify the firmness of your noodles – hard, regular or soft.
In general, the Japanese prefer chewy, firm noodles, but in some regions, a more soft texture can also be popular. Of course, this is a matter of personal taste. That said, it cannot be denied that just as in Italy, al dente is how the majority likes their noodles cooked. And like how the type of pasta changes to match the sauce used, the same goes for the shape of ramen.

For Tonkotsu Ramen, the main focus is the soup. That’s why Hosomen, or thin noodles are often used. Thinner noodles keep the dish from being too heavy. Futomen, or thick noodles, go better with Tsukemen as the dipping soup finely escorts their chewy texture.

How to order firm or soft ramen noodles in Japan

At most ramen shops, you can order how you want your noodles cooked. This is especially common in Fukuoka Prefecture, where you will hear customers loudly shout their preferences. If you see people around you do this, how about giving it a try yourself? Just shout any of the following: konaotoshi (almost uncooked), harigane (extremely firm), barikata (very firm), kata (firm), futsu (normal), yawa (soft), bariyawa (very soft).

When the soup is light in flavor, straight noodles might not be able to carry the soup to one’s mouth even if the art of slurping is properly executed. In a case like this, chijiremen – or curly noodles – will do the job. Chijiremen’s springy, curly shape holds on to the soup. The texture of these wavy noodles helps enhance the ramen dish.

Besides the typical ramen, there are a number of other special noodles to try while you’re in Japan!

These soba noodles are for the competitive eater! Stack up your dishes and see who will become the noodle master. These small servings can quickly add up and a popular goal is to reach one hundred bowls of soba.

This dish uses flat noodles made from soy and wheat and is considered one of the “Three Great Noodles of Morioka.” One defining feature is its miso paste, which is different in every restaurant. Enjoy it with a variety of vegetables and finish by mixing your remaining miso paste with a special egg soup. 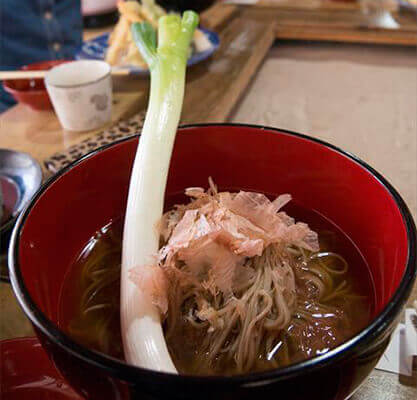 If you’re not confident in your chopstick skills, this dish is for you! This peculiar soba is scooped with a long, curved green onion and is a specialty of Ouchi-Juku in Fukushima prefecture. To add some flavor, you can actually eat your utensil with your soba! 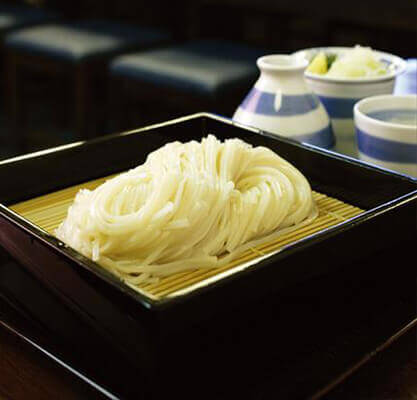 This extraordinary noodle is the only one of its kind. Inaniwa udon is thinner than regular udon, glossier than ramen and is typically handmade. This udon is quite chewy, giving it a pleasant texture. It’s no surprise that it’s considered one of Japan’s “Three Greatest Udon.”

Another one of the “Three Great Noodles of Morioka,” reimen is served chilled with a piece of fruit. Don’t get cold feet! The combination works surprisingly well and the soup is designed to taste best when cold.

There is a tale from the Edo period about a son looking for a dietary food for his sick father. He met a monk who told him about a way to make noodles without oil. His father recovered quickly and the dish was named after the area, Shiroishi. These noodles have a smooth taste from being kneaded with salt water.

All about ramen: The Toppings

The picture is only complete once the chashu (roasted pork), a boiled egg, leek, nori, menma (fermented beansprout) and naruto (fishcake) are topped on the ramen. These toppings also give the dish a more healthy balance (well, at least to some extent). Toppings vary depending on the ramen in question. However, these are the most common. Now knowing all about ramen, we hope you will be able to enjoy ramen to the max. Still, without knowledge of the Japanese language, stepping into a ramen shop in Japan can be a little bit intimidating. So, we want to help you learn how ramen is served and slurped in Japan.

How to order Japanese ramen from a ticket vending machine

Most Japanese ramen shop menus are very simple, but that doesn’t mean ordering is simple if you don’t know how to. While ordering methods differ depending on the shop, here is some basic knowledge that won’t hurt you on your ramen rendezvous.

At the majority of ramen shops, you purchase a food ticket at a ticket machine (usually located at the entrance) and put this ticket on the counter in front of your seat or on your table. If the ticket machine has no pictures and you can’t read Japanese, find any of the following characters for a portion of ramen → ラーメン らーめん 中華そば.

Once you get used to purchasing food tickets in advance, it is easy to forget to pay at ramen shops that have no ticket machines, so take care!

How to slurp ramen noodles in Japan

Depending on your culture, slurping noodles might be unheard of. However, in Japan, slurping your ramen (or other noodles for that matter) are the basics of the basics. Noodles are slurped not with the pure purpose of cooling them down, but also to allow the soup’s flavor to spread throughout one’s mouth. This might sound strange if you are not used to the concept. However, note that wine experts are on the side of the Japanese. They prefer to slurp wine as this savors its fragrance throughout the mouth. Slurping your noodles is a gesture towards the master. In fact, it shows that you are enjoying your bowl to the max. 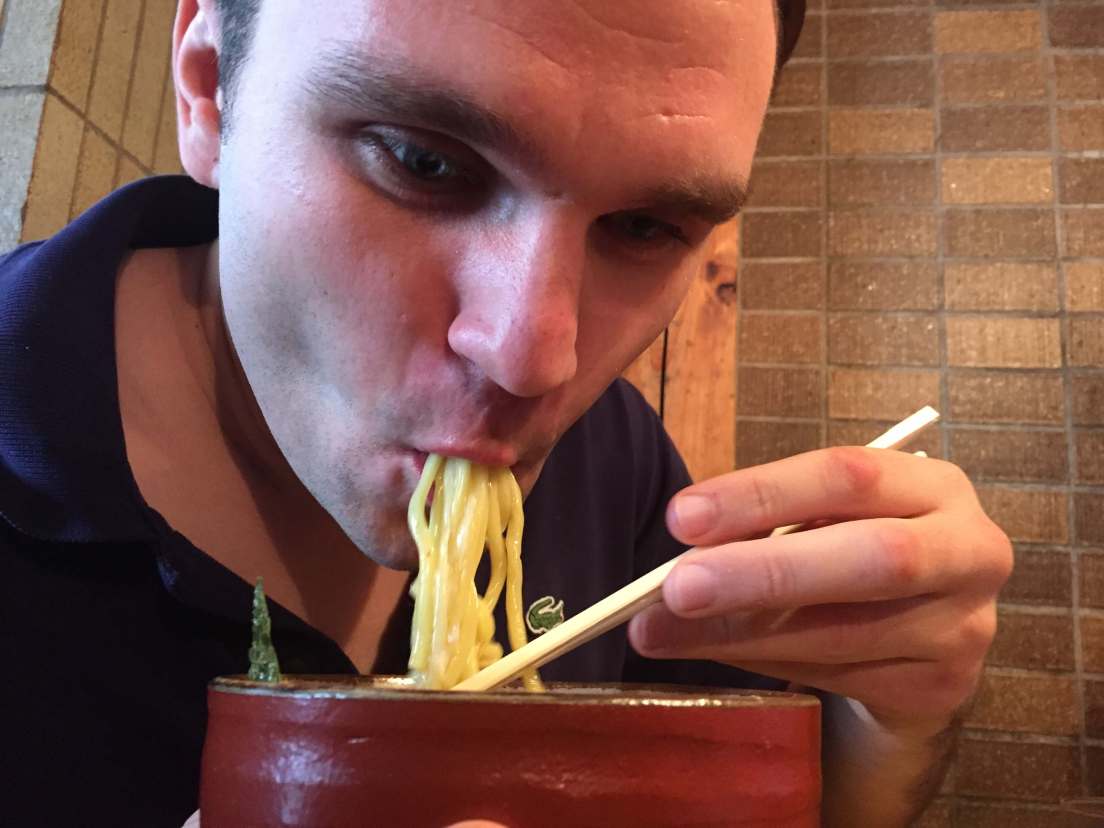 How long you should stay inside a ramen shop

Dining at ease while enjoying a conversation is great, but not advisable when you are having ramen at most places. The noodles loose their firmness and become too soft after a short period of time. So eating them right after the bowl hits the table is best. Also, there is one more reason to get the noodles down fast. Everyone wants to get their hands on a bowl of ramen. As a result, ramen shops often have people waiting in long lines in front of the shop. So staying too long after finishing your dish can be impolite. 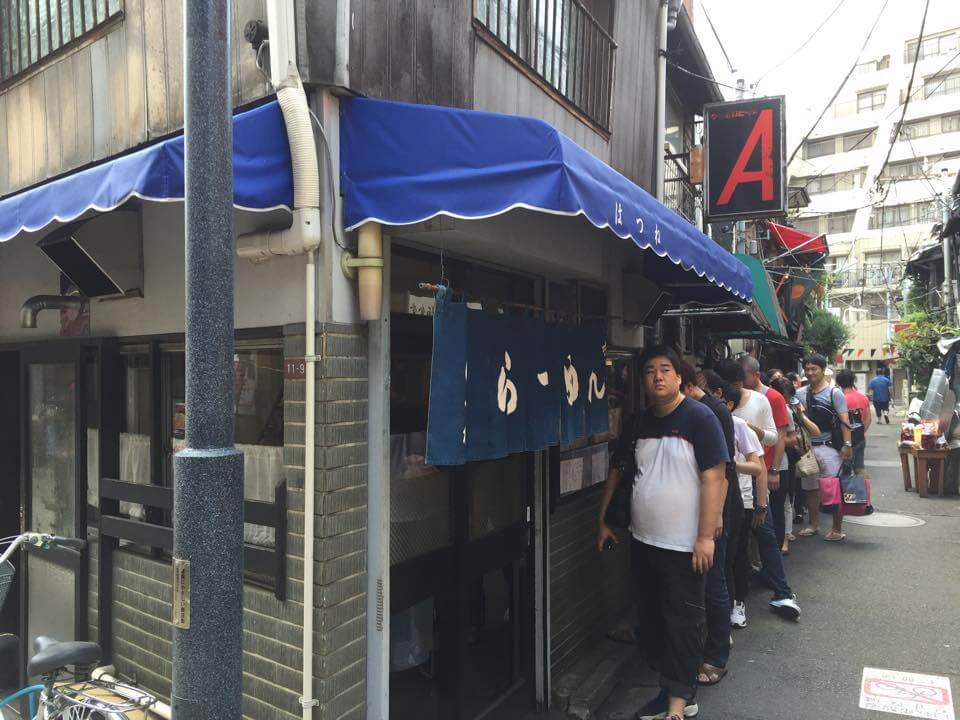 How to leave a ramen shop in Japan

Some might say that the customer is king. However, showing that you enjoyed your slurp will make your ramen master’s day. If you are sitting at a counter seat, putting your finished Japanese ramen bowl back on the counter top is a gesture that is always welcome. Don’t forget to say “Gochisosama”  (thank you for the meal), and give a friendly nod as you leave.