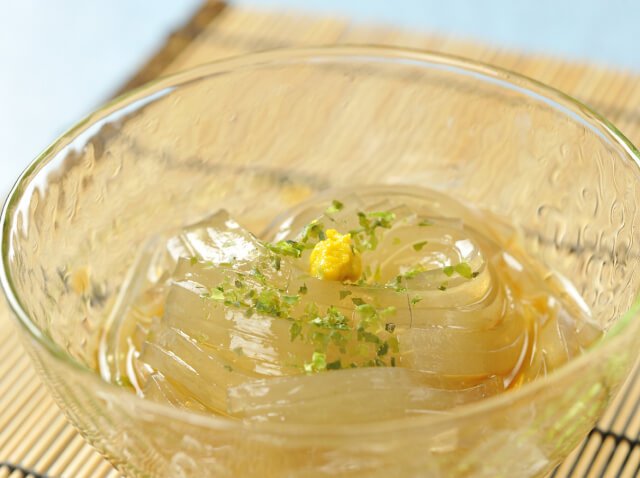 The flavors of summer Japanese food

Hot and humid days are seemingly endless in the summer in Japan. As the heat suppresses appetites, cool, light, and slurp-easy foods are loved by Japanese people. As a result, tokoroten, is a popular Japanese food during the summer season.

Tokoroten is perhaps best described as a jelly-like noodle. This Japanese noodle is made from seaweed and has been enjoyed by Japanese people for over a thousand years. Appearing with a healthy portion of tokoroten is usually a mix of sweet vinegar and soy sauce, with a sprinkling of seaweed. To top it off, sesame and Japanese mustard complete the refreshing mix this summer Japanese food. Tokoroten can also be eaten sweet with black honey, so be sure to give this alternate flavor of Japanese food a chance too!

How to make Tokoroten Japanese food 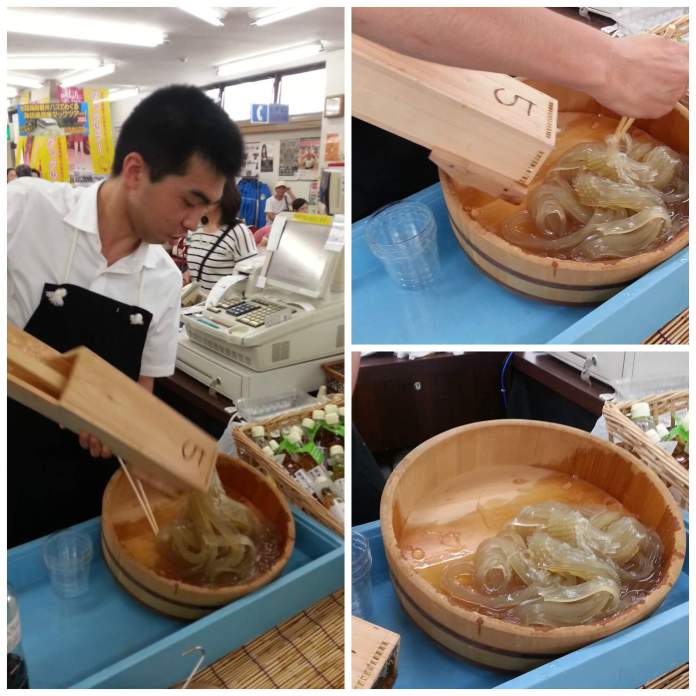 Tokoroten is made by boiling red algae until it becomes clear jelly. After the mix has been dissolved in water and congealed into a jelly form, it is pressed out into noodle form. It’s unique production method of being pressed out via a block device called a tentsuki has made it a sort of cultural icon, even replicated in quirky souvenirs. So the next time you spot this at a souvenir shop, you’ll know what it is! Unlike gelatin desserts, the tokoroten has a firmer texture. Also, tokoroten is vegan!

How nutritious is Tokoroten Japanese food?

Tokoroten is practically 90% water. As a result, it makes great refreshing dish in the summer. Also, this Japanese food is popular as a diet food because it contains low calories. In fact, tokoroten can replace carbohydrate-rich noodles such as udon and ramen. In addition, the Japanese jelly noodles are high in fiber which helps you feel full longer and keeps your body regular.

What is Shun in Japan?

Shun (旬) translates directly into “season”, but strictly speaking in Japan refers to the ten days in which a food (be it a fruit, vegetable, fish or dish) is deemed to be at its tastiest and best period in which it is to be eaten. 季節（kisetsu), which also translates into “season”, refers to six periods within each season (spring, summer, autumn, winter), according to the solar calendar in which a change in the season is deemed to occur – an indication of the Japanese sensitivity to changes in the weather and climate, and its impact on crops and catches of the day. 「A Taste of Sh旬n」aims to bring you the freshest and best harvests, catches and dishes of the day.