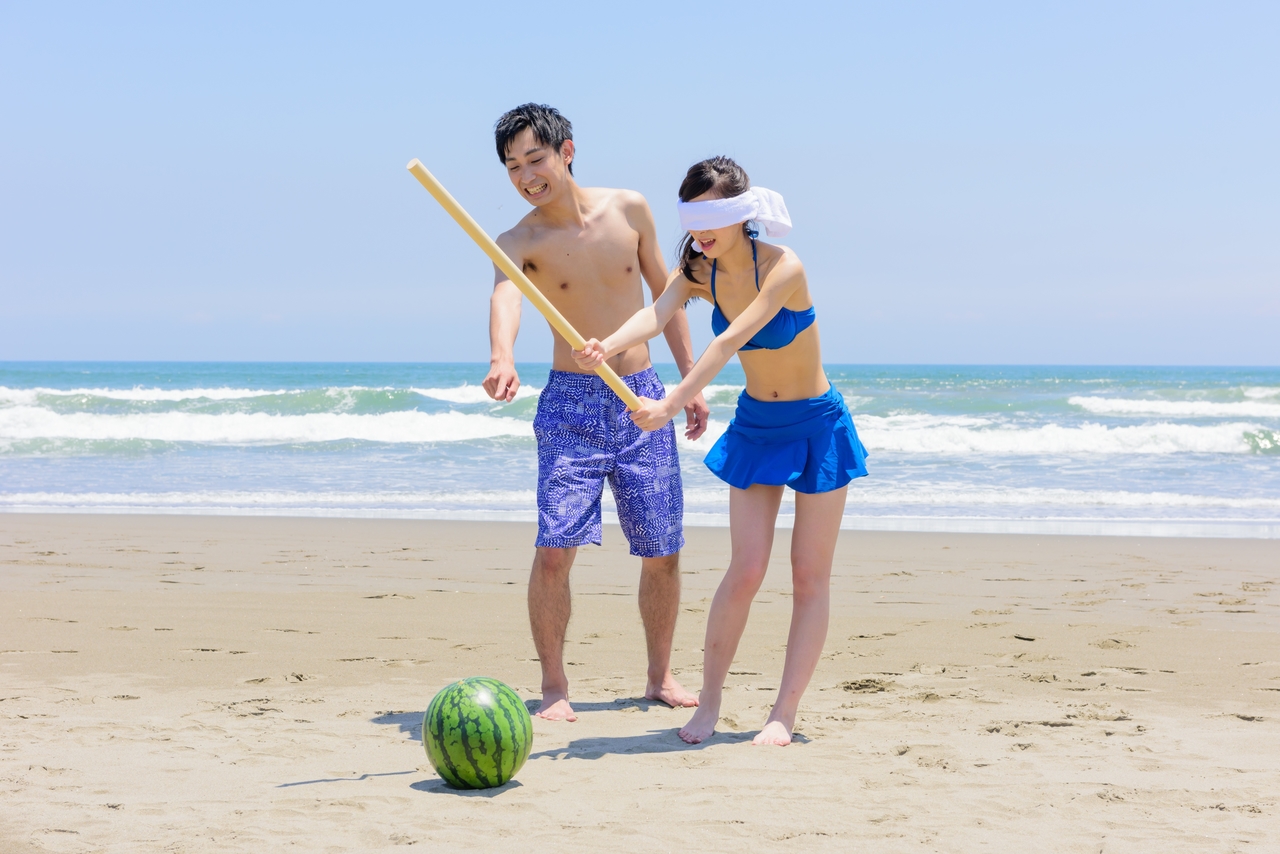 Watermelon (Suika スイカ) and Japanese summer go together like fireworks and yukata. This refreshing fruit is in season from June to August and is best eaten during beach parties or while relaxing on your porch at home. But no matter where you decide to eat it, its taste means summer.

Fruit in Japan is very expensive and the watermelon is no exception. Some of the most famous watermelons auction for 350,000 yen a piece during the first days of harvest. And then there’s a special type of black watermelon grown in Hokkaido that retails for around 5,000 yen apiece. But why is fruit so expensive?

Unlike the West, fruit is not an everyday item in Japan and therefore it is considered a luxury product. Gift giving is a Japanese tradition and is meant to show appreciation or build a relationship. The importance of gifts is not to be taken lightly and there are luxury stores dedicated to fruit gifts. Combined with the fact that Japanese farmers only want the best fruit, removing the bad or misshapen fruits from the general market. This means fewer fruits actually make it to the store and this increases the price. 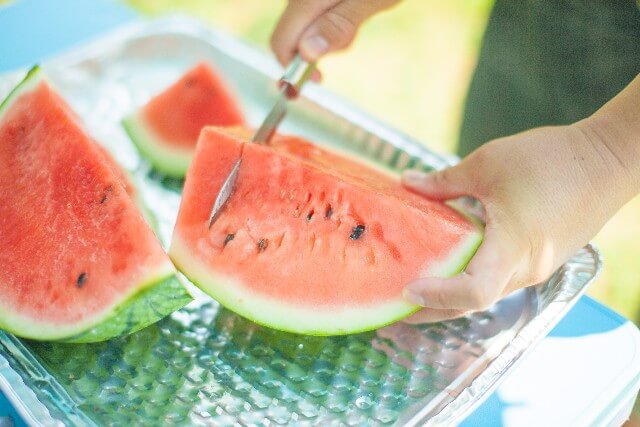 Japan gained international watermelon fame with the introduction of the square watermelon. The reason why farmers decide to grow their fruits in square glass boxes is so that they would fit better in refrigerators. This type of watermelon quickly became a product of luxury instead of a product of convenience. Nowadays you can also find watermelons in heart shapes, with a face printed on them or even in the shape of a human face! A square watermelon is not a common sight in supermarkets, so expect to pay at least 10,000 yen for a regular-sized one. 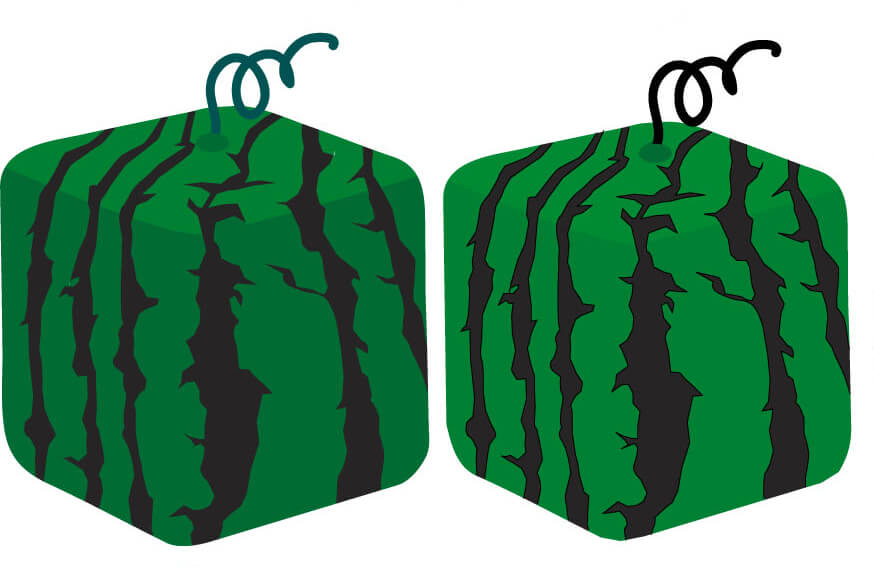 How About Salt With Japanese Watermelon?

Japanese fruits is generally sweeter than the fruit most people are used to. But this is not the reason you will sometimes see Japanese add salt to their watermelon. There are three possible reasons for adding salt to a watermelon. Firstly, salt increases the already sweet taste of the fruit. Apparently adding salt to something sweet increases your taste buds’ reception to any sweet flavor. Secondly, summer is a very hot and humid season in Japan and your body craves salt because of excessive sweating. The warmth actually makes you crave salt and the addition of a cool watermelon makes it all the more refreshing. And finally, watermelons in Japan are almost always iced or cooled making them nice and refreshing. However, the cold temperature removes some of the sweet flavor. For that reason, salt comes to the rescue to bring back some flavor.

Suikawari, or watermelon smashing, is a classic Japanese beach activity in summer. Similar to the Mexican piñata, suikawari involves blindfolded players trying to smash open a watermelon guided by the shouts of their friends. Usually, a sheet or piece of cardboard sits under the watermelon. This is, of course, to keep the smashed pieces safe from the ground. The first person to split the rotund fruit using a bokutou (木刀, wooden sword) or baseball bat is the winner of the game!

Rules of Suikawari in Japan

If you want to eat your watermelon in an original and destructive way, then try out suikawari yourself! Suikawari is so popular that in 1991 the “Japan Suika-Wari Association (JSWA)” established a set of written rules for the game. The association no longer exists but it is pretty amazing that it even did. Some of the rules concern the distance between the watermelon and the player, the type of stick, and the type of official JSWA blindfolds.

According to the regulations, the distance between the smasher and the juicy watermelon must be between 5 and 7 meters. The stick must have a circumference of 5 centimeters with a length no longer than 120 centimeters. Then, most importantly, a well-ripened domestic Japanese watermelon must be used and smashed within 3 minutes. There are also points awarded for how cleanly the melon is busted. Splitting the juicy fruit in half is ideal.

Additionally, judges at the competition need to have eaten at least ten watermelons in the current year. It makes you wonder how they were even able to check all these rules. 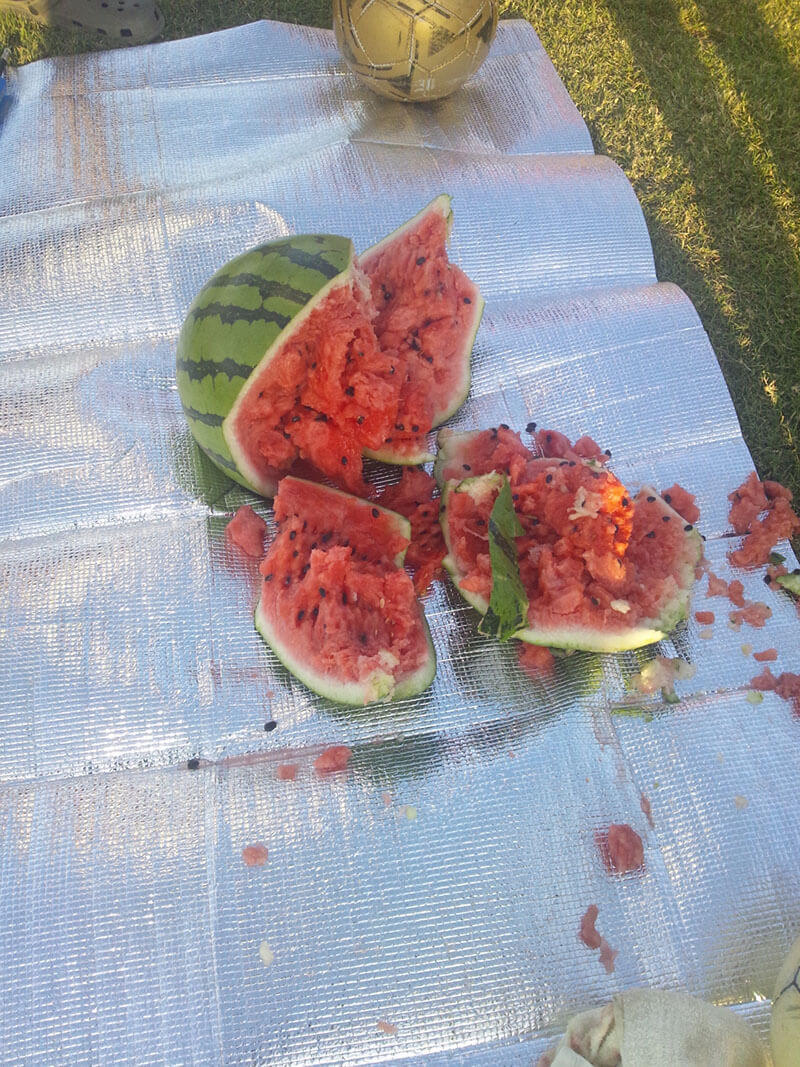 Why Do Japanese People Smash Watermelons?

Like many traditions, it is difficult to trace back the exact origins of suikawari. It may have something to do with the introduction of watermelons to Japan, which also brought along the tradition from abroad. Perhaps it has something to do with the Japanese martial art of drawing swords. The image of a disciplined samurai slicing open a luxurious watermelon is certainly an entertaining idea. The bottom line is that suikawari is great summer fun that people of all ages can enjoy. So, for your next Japanese summer beach party, find the juiciest watermelon you can and give suikawari a swing! 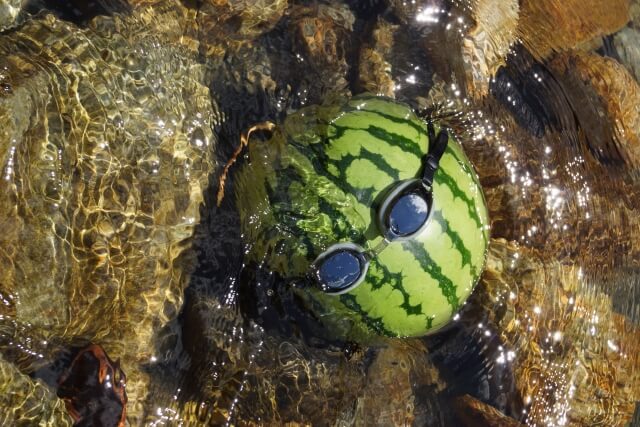 We hope you get to enjoy many watermelons during your summer in Japan!