Japan has no shortage of beautiful and cute things. From face packs to sweets and stationary supplies, Japan takes great care in designing everything to be visually attractive.

Another thing that Japan is famous for is their artistically designed manhole covers. Municipalities strive to outdo each other in designing the best cover, all while showing off the character of their city. These beauties have captured the eyes of many people, both in Japan and overseas and it has already spawned a cult of its own. Photobooks and websites dedicated to chronicling the many designs and the places to find them can be found online.

According to some sources, in the late 1980s, there was a Construction Specialist from the Public Sewer Division, Ministry of Construction who advocated the use original designs for each municipality in the hope that it would improve the image of the sewage industry and make it more appealing to the general community. Everyone seemed to think that that’s a great idea. Almost every year competitions are held for the best manhole covers. Municipalities and their organizations have been competing with each other since then to design the best manhole covers. And now you have one more thing to look out for when you come to Japan!

Uncovering the History of the Best Japanese Manhole Covers

Here are the top 3 manhole covers with the most interesting backstories: 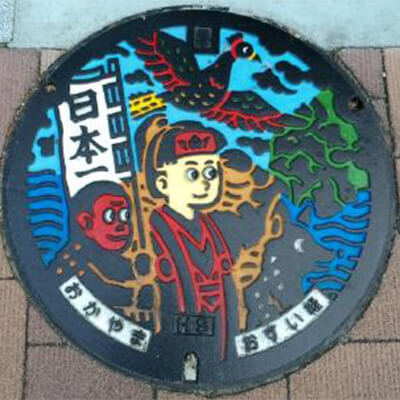 This cover depicts Momotaro, the popular hero of a Japanese folklore that is said to have originated from Okayama Prefecture. In the legend, he was born from a giant peach and journeyed with 3 animal companions to defeat an evil ogre. It is thought that this story started as a legend about Kibitsu-hiko-no-mikoto, a legendary prince who slayed the ogre, Ura. The prince is enshrined as a deity in several shrines within the prefecture. 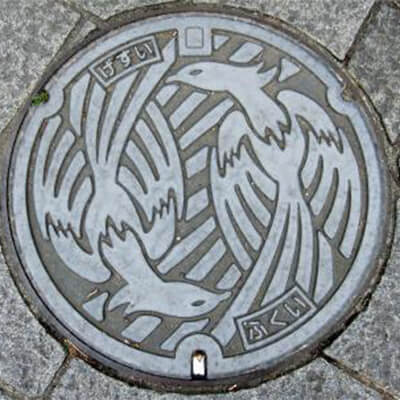 This cover shows two phoenixes. One theory states that the city chose that as their symbol due to their history of having “risen from the ashes” multiple times after being hit by air raids, floods, and earthquakes. Another theory states that it stems from the city’s history of recovering from an earthquake only to again be hit by a big fire and the two phoenixes symbolizes the two-fold recovery. 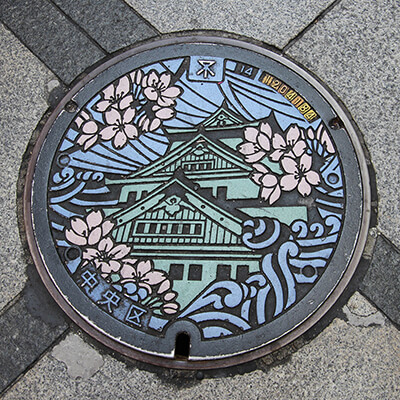 Elaborate water and sewage systems existed in Osaka since centuries ago. They were constructed by Toyotomi Hideyoshi along with Osaka Castle, and some are even still in use today. This cover was created to commemorate the 100th anniversary of the modern sewage system. It depicts water, the city’s flower – sakura, and Osaka Castle which can be considered the origin point of today’s sewage system.

Also read about our own personal favorite, the manhole cover that has a hidden Hachiko in it.

Melissa Wullur
I’m an amateur writer and avid reader who’s been living in Japan since 2007. I enjoy reading and writing about food, travel, and quirky trivia. I treat 100 yen shopping as therapy.MORE ARTICLES BY THIS WRITER ｜ ABOUT WATTENTION NINJA
Comments