Edo is the old name of the city now called Tokyo. It is a historic name, rather like Lutecia for Paris or Constantinople for Istanbul. It is a little known fact that Edo was one of the biggest cities in the world in the 18th Century. While Edo had a population of one million, London had 700,000 and Paris just 500,000. Edo was renamed Tokyo when the Tokugawa dynasty fell in 1867 after 300 years of reign. Today, the population of Tokyo prefecture has reached 13 million, growing to 16 million during the working day. So what makes Edo/Tokyo this vibrant and successful?

After the Battle of Sekigahara, the most successful territorial Lord Ieyasu Tokugawa was appointed Shogun by the Emperor.
He immediately made plans to build a new capital in Edo. Until then, the capital of Japan had always been in the west of the country, apart from rather brief spell during the Kamakura period. At that time, Edo was a just a deserted fishing village when Ieyasu chose it.
It seems that one of the reasons Ieyasu chose Edo was its favorable situation according to Feng Shui. From the ancient times, the Japanese believed East is the direction where new energy is born, as it is the direction where the sun rises. Another key factor was Mt. Fuji, which had been worshipped as a divinity, and was long-regarded as a source of positive ‘Qi’.
Combining the power of the East with the Qi from Mt.Fuji, Ieyasu imagined Edo flourishing.

First, Ieyasu established Edo castle as the center of his new capital. Then he began a huge project to build a canal network around it. He even relocated Tonegawa (Tone river) which opened into Tokyo bay, to pour emerge at the Pacific, mainly to allow the plan of the city to take a lucky form according to Feng Shui.This construction project lasted for 60 years. To fund this project, Ieyasu mobilized all territorial lords to contribute. This monumental effort built the infrastructure of the city, which supported the Tokugawa dynasty. This is why Edo is said to be a Feng Shui city. 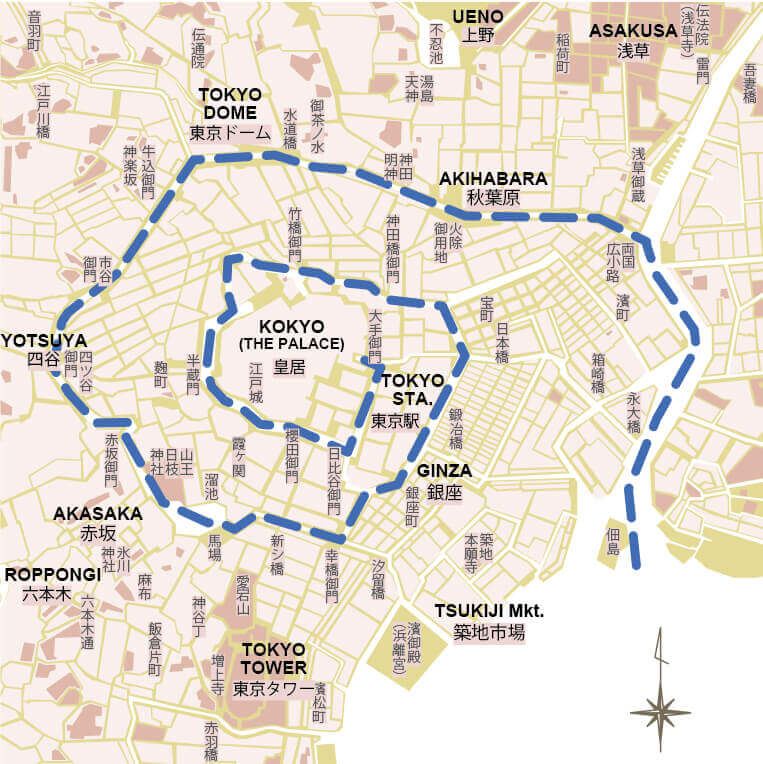 Upon building this grand design, Ieyasu got to know a very trusted Feng Shui master, priest Tenkai, who belonged to the Tendai clan of Buddhism. He advised Ieyasu to build Kanei-ji (Kanei Temple) and Hie Jinja (Hie Shrine) to guard the two “Kimon (bad directions)” to protect Edo. After the death of Ieyasu, Tenkai chose Nikko (now a popular tourist destination) as a place to deify Ieyasu, and he built Nikko Tosho-gu. Nikko sits almost exactly north of Tokyo, which is the direction of the North Star, which symbolizes the ruler of the universe. Thus, Ieyasu became the eternal deified ruler of Edo.